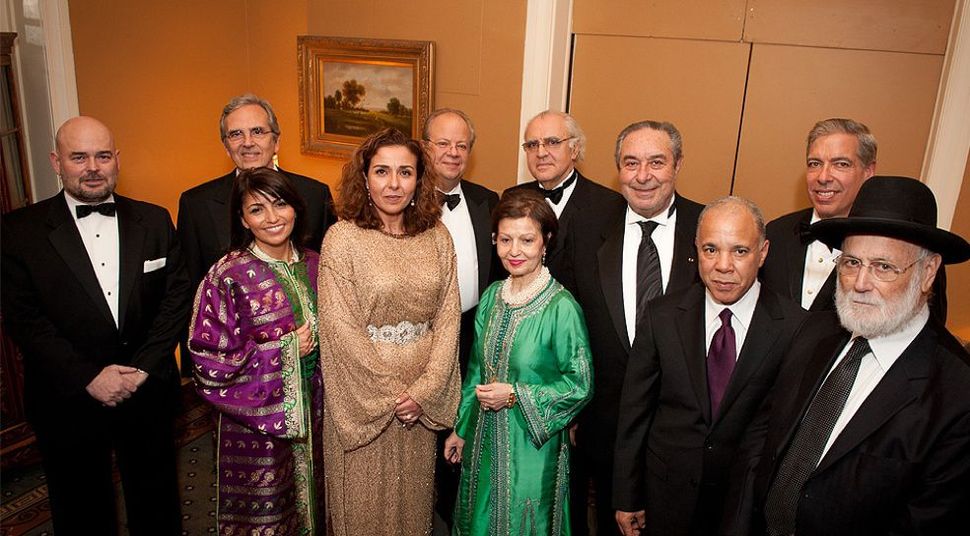 It was bound to be a bizarre experience for me. Instead of rolling through my modest Brooklyn neighborhood, I was going to the fancy Pierre Hotel to sit in a room full of New York City’s elite. If you are not accustomed to the rigors of society life, a tableau of rich folk dolled up for a night out is both intimidating and comic. The fact that the reception on the evening of December 13 was being given by the American Sephardic Foundation in honor of King Mohammed VI of Morocco only added layers to the strangeness of my situation.

Distinguished guest after distinguished guest stood at the podium as wine was poured for the assembled party, and effusive words were spoken in praise of King Mohammed. There was a definite charm, even a relief, in hearing a room full of Jews applauding a Muslim monarch and paying homage to his wisdom and beneficence to the Jewish community. The evening had a feeling of the middle ages: the era of court Jews and royal indulgences. The King’s award was accepted by Serge Berdugo, an ambassador and a descendant of a family of Jewish royal advisors to the Moroccan throne.

Berdugo’s praise of the King and the royal commitment to the equality of his Jewish subjects was warm and engaging. He also spoke about the vibrancy of the contemporary Jewish community in Morocco. Many of the speakers drew attention to King Mohammed’s remarks in a speech last year in which he spoke of the Holocaust as “a wound to the collective memory” and as “one of the most painful chapters in the collective memory of mankind.” It is of course remarkable to hear the leader of a Muslim country using this kind of language in the contemporary landscape where delegitimizing the memory of the Holocaust has become a grotesque political tool.

This praise, and the strength of the King’s patronage of the Jews, made me wonder why a million Moroccan Jews live in Israel, France or the United States with only a few thousand remaining in Morocco. The historical record shows that Jews in Morocco in the chaotic years after independence in 1956 were scapegoated and victimized by the majority population. The Jews left Morocco in desperate haste. While the royal attitude towards the Jews is admirable, the reality of life in Morocco for its Jews has been fraught with trials.

The current attitude of the Moroccan government to its minorities is also a complicated issue. The Moroccan military recently engaged in a strong-armed suppression of protests by the Sahrawi people, a formerly nomadic Berber tribe without a homeland, who are caught in a cold war between Morocco and neighboring Algeria. While many sovereign nations use their power in questionable ways, this recent outburst of violence brings up painful memories of the situation in Morroco for its Jews in the years after independence.

At the reception, I had an opportunity to speak with Marc Charles Ginsberg, the former US Ambassador to Morocco and the first Jewish American appointed as a diplomat to an Arab nation. I asked him if he felt that Jews have a special responsibility to take concern with the treatment of minorities in Morocco. Ambassador Ginsberg politely brushed my question aside with the political non sequitur that Berber minorities are treated much better in Morocco than by neighboring governments.

Still, there is much to celebrate about Morocco and about Moroccan Jewish history and culture. The American Sephardic Federation and the Center for Jewish History are undertaking a variety of cultural presentations over the course of the next year, including some concerts and an intriguing sounding evening with a tableau vivant of traditional Moroccan wedding scenes. Of course, any opportunity to work with those members of the Muslim world who are receptive to Jewish culture should be taken. And, especially if it provides a chance for American Jews to engage with the riches of Moroccan culture.