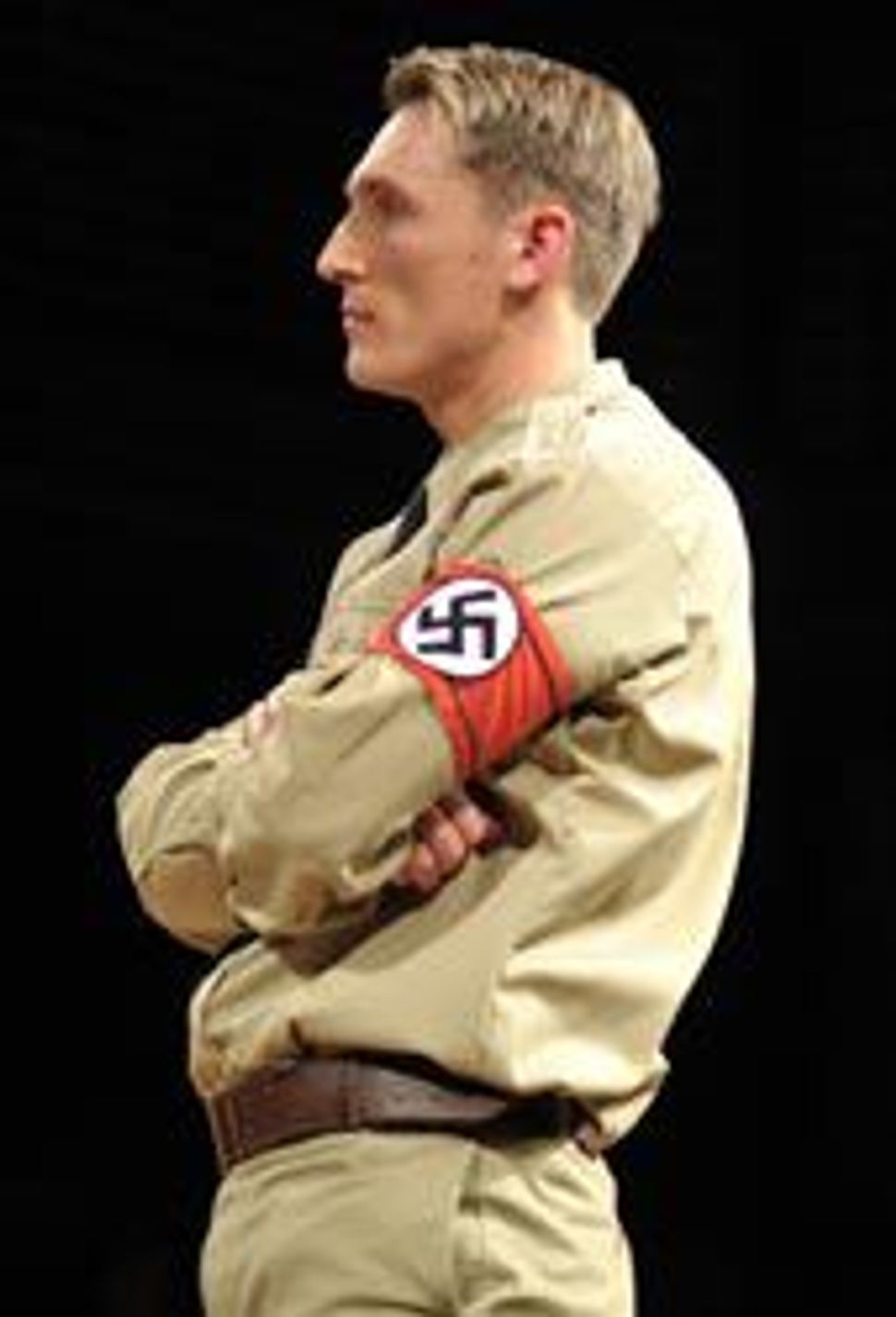 Well, yes, that was exactly what I expected, knowing that the play’s central theme is Theresienstadt, the notorious Nazi transit camp in Czechoslovakia.

In fact, it is the absence of Jewish “skeletons,” barbed wire, guard dogs and death — all the usual motifs of Nazi barbarity — that makes “Way to Heaven” so compelling.

Based on the sadistic propaganda charade the Nazis meticulously constructed in Theresienstadt in 1944 to show Red Cross inspectors a “model” village where Jewish detainees lived under pleasant conditions, “Way to Heaven” plays on the gap between the surreal version of reality they — and we, the viewers — are permitted to see, and the dark reality of the Nazi death machine turning relentlessly in the background.

Using a pared-down stage set, Mayorga’s unusual take on Nazi cruelty is both psychological and visual torture — for the Jewish characters forced to act in this hideous deception to save their skins, and for the audience forced to watch as they act out, again and again, the made-up scenes from their mock lives.

Scenes repeat themselves endlessly — a sparring couple having a lovers’ tiff on a picnic blanket; two young boys playing with a spinning top; a little girl playing with her doll and singing a haunting Hebrew song. Not forgetting of course, the tragicomic figure of Gershom Gottfried (interpreted by Mark Farr), forced to play the village’s “mayor” and coordinate the whole farce, under the tutelage of master puppeteer, the Nazi Commandant.

The unnamed Commandant (played brilliantly by Francisco Reyes) is no two-dimensional, evil caricature, but witty, fast-talking, cultured and Aristotle-quoting, rising magnificently to the challenge of choreographing the whole sick charade. A commanding figure dressed in pristine Nazi uniform and cap, the Commandant dominates the stage physically, reflecting the power he holds over his Jewish actors, who are always just one small slip-up away from extermination.

At times playing out his role to the haunting background sound of a waltz, at times thrust into dazzling light, at times cast satanically in an eerie darkness, the Commandant cuts an ironic, strangely seductive figure. His hypnotic voice lulls the audience as he feverishly cajoles a reluctant Gershom, waxes lyrical about French philosophy, and repeats time and again his own lines as he welcomes unseen visitors into his strange universe.

Yet death is still ever-present, hovering unseen in the play. We hear the sound of the train whistle coming in and out of the camp, transporting detainees to other extermination camps. And when the Commandant orders Gershom to cut the number of Jews and he tries to offer his resignation, we know that he is sacrificing himself to the gas chambers.

“Way to Heaven” is ultimately all about what is lurking beneath the surface — the unsaid, the unspoken, the gaps in the story. And it is precisely for this reason that it succeeds.

Watch an introduction to ‘Way to Heaven’: