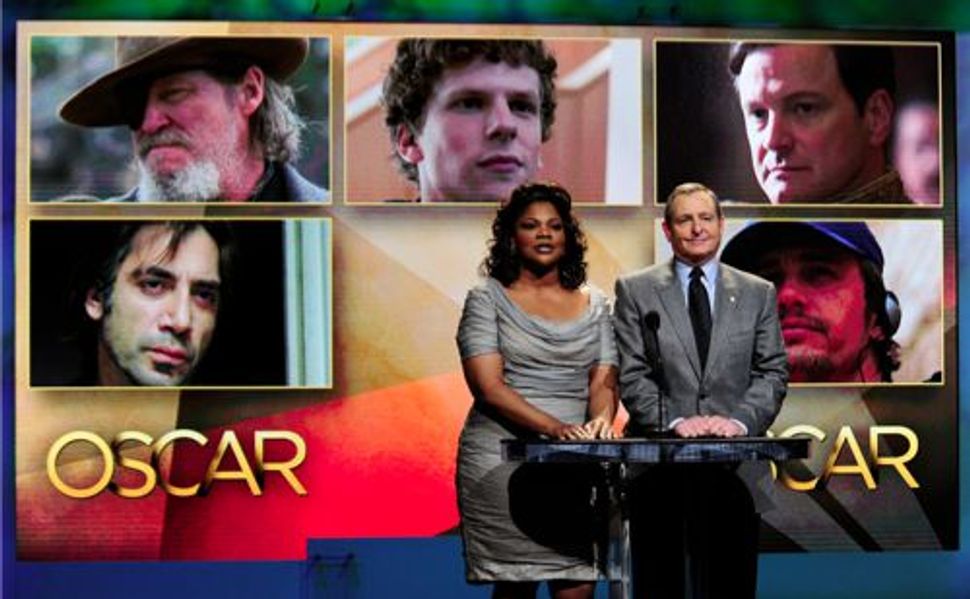 Nominations for the 83rd annual Academy Awards, announced this morning, were good for the Jews.

Jews also ruled the screenwriting categories. Debra Granik scored a nod in the Best Adapted Screenplay category for the brutal “Winter’s Bone,” while Hollywood vet Aaron Sorkin earned his for Facebook docudrama “The Social Network,” as did fellow A-lister Scott Silver for scrappy Boston epic “The Fighter.” In the same category, the Coen Brothers won the Academy’s attention for their highly acclaimed adaptation of Charles Portis’ 1968 novel “True Grit.” British improv-drama icon Mike Leigh was nominated in the Best Original Screenplay category for “Another Year,” his sobering look at happiness — and the lack thereof — among the British chattering classes. And British-born, Long Island-raised David Seidler got his first Oscar nomination — in the Original Screenplay slot — for “The King’s Speech”.

Semites didn’t fare as well in the Best Supporting Actor or Actress categories, though 14-year-old Hailee Steinfeld — reportedly the daughter of a Jewish dad and black/Filipino mom — got a nod for her widely lauded turn as vengeful tween Mattie Ross in “True Grit.”

Stay tuned to the Forward for more news about Jewish nominees — and winners — as the Oscars approach on February 27.