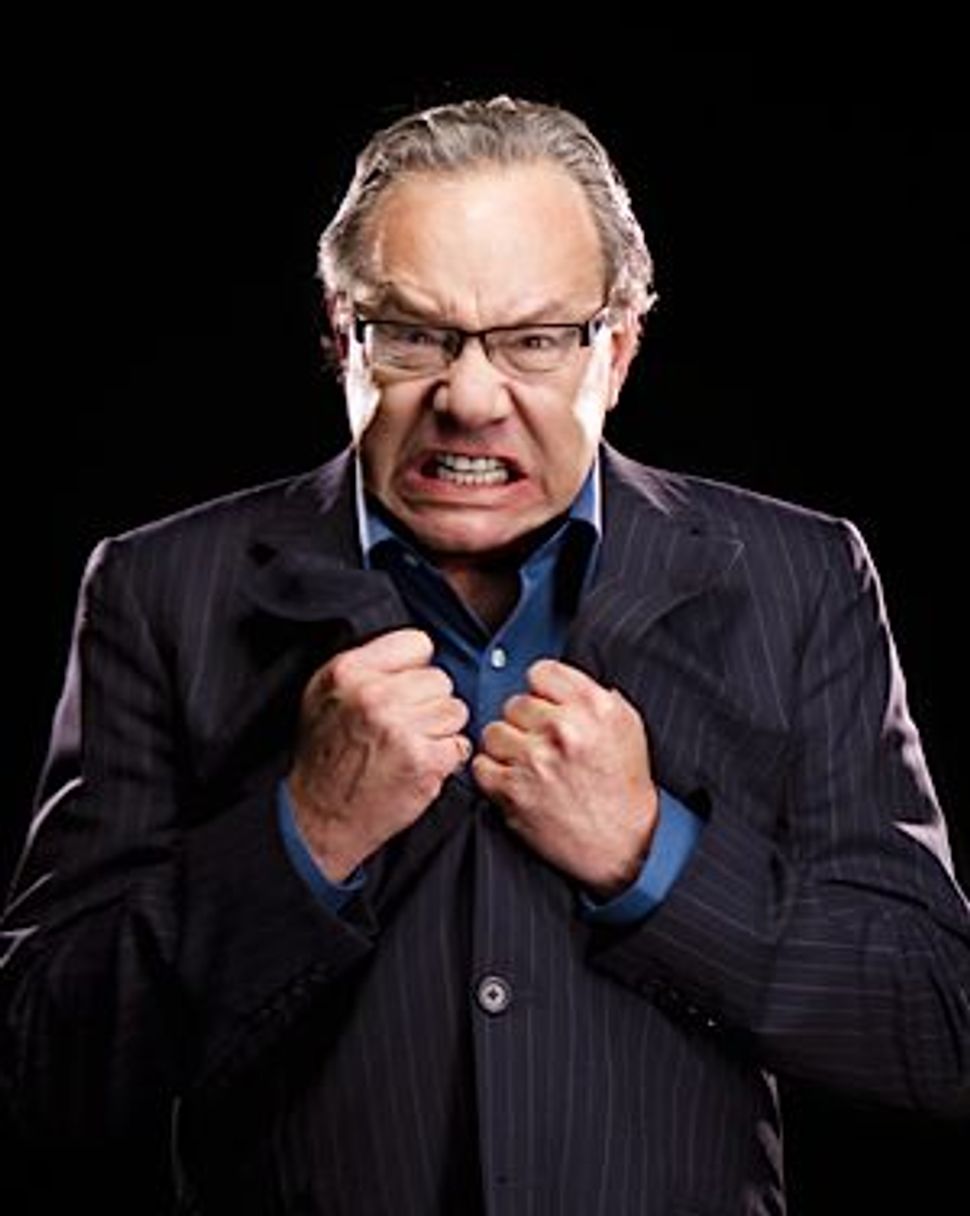 Lewis Black is a bundle of apoplectic fury on stage. His fingers shake and his voice is raised in rage as he throws thunderbolts of indignation at the audience.

Consider his concert at Carnegie Hall a few years ago. It was recorded for posterity (not to mention profit) and ultimately earned him his first Grammy Award. In it, he recalled his first Yom Kippur services. Words cannot describe his reaction as a five-year-old to hearing the rabbi discuss the prospect of being placed in the Book of Life.

Or the Book of Death.

Actually words can describe it. Black does it in his act. It’s just that many of those words cannot be used in a family newspaper (or website).

“Only the Jews could come up with a holiday that is so depressing,” he said. “The only people who’ve taken this a step further are the Muslims, who take chains and actually beat themselves.”

“I’m surprised the Jews didn’t think of that. But we don’t work well with tools.”

Black won a second Grammy in February for his CD “Stark Raving Black,” and has a new movie role as the narrator of “Peep World,” a film about a dysfunctional Jewish family starring Sarah Silverman, Michael C. Hall and Rainn Wilson. These are remarkable achievement under any circumstances, but even more so considering that comedy was not his first career choice.

Black’s mother, of course, wanted him to be a doctor. When that proved unlikely, her second choice was to have him at least marry a doctor. But young Lewis was headed on a different path. He wanted, albeit briefly, to be a rabbi. Those familiar with Black’s style, from his regular appearances on The Daily Show or elsewhere, may contend that his decision to enter comedy saved the Jewish people considerable tsuris.

Black seemed to have a natural affinity for the job. “Not to toot my own horn, but I was really good at Hebrew.”

His interest in the rabbinate lasted about two years, from age 13 to 15. “I thought it was a good gig. You basically get up once a week and tell people what you think. You read the portion of the Torah, take that and go off on what ever you want.”

That he was at all captivated by the idea, even temporarily, was in large part a tribute to the rabbi at Temple Sinai in Washington, D.C., the famed Balfour Brickner. “He was one of the great rabbis,” Black said. “He left to take another job and I guess the new guy — well, I lost interest.”

Black was raised in a Reform household. “My parents weren’t very religious, but they did pay attention. My mother would go to the memorial service for Yom Kippur and we did the holidays.”

Though his family is a frequent foil for his humor — mom took being a Jewish mother “to a dark place” — he was very close to both his parents. He is particularly proud of his father, who he said “is the only man I know who sat down during the Vietnam war and read the Geneva Accords and said there is nothing here that legitimizes what we did.”

Black’s father worked for the Department of the Navy and resigned at the age of 55 as a matter of conscience. “That certainly whacked into his pension and at the time I was in college and my brother was just entering school.”

Black is convinced his Jewish upbringing played a key role in the way he turned out. “Being separated from the dominant culture you learn a great deal about being the underdog and get a real sense of what it’s like to be separate,” he said.

“It gives you a greater sense of empathy with those who are different. Because you’re not involved, it allows you to take a look at that culture with a different eye. It gave me as much as I have one a decent moral compass.”

Black has since “drifted” from active practice of Judaism, though he considers it “an important part of who I am.” And he is not afraid to show it.

At a special performance for the Armed Forces at the Grand Ole Opry, which will be broadcast on Country Music Television, he started his act this way:

“I’m really thrilled to be here, because I believe I am the first Jew appearing on Country Music Television. I find that surprising, because I thought we owned it.”