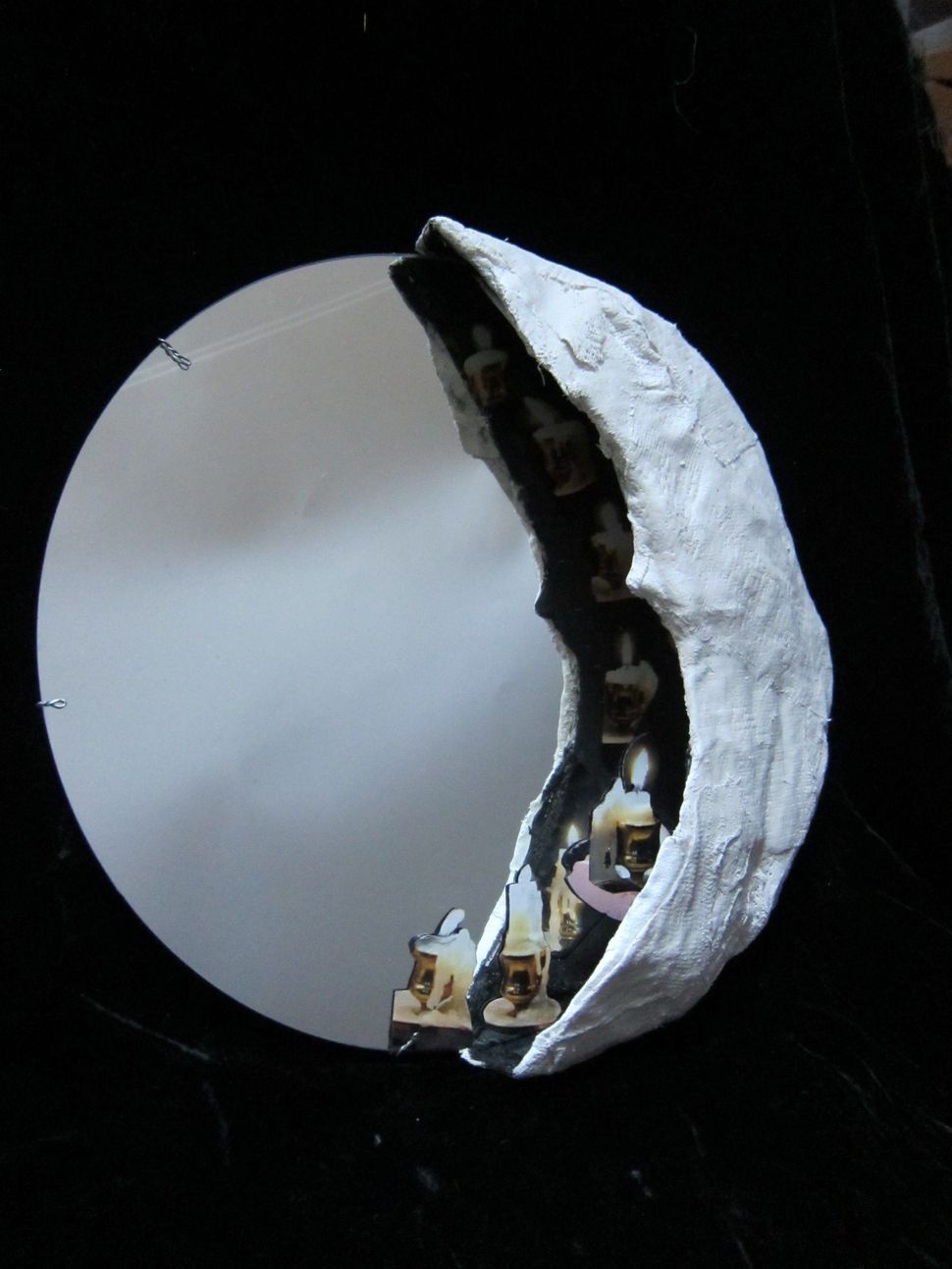 “Rosh Hodesh: Beginning and Renewal,” a community art exhibition on view at the San Francisco Bureau of Jewish Education’s Jewish Community Library until July 31, begins and ends with an egg.

Curator Elayne Grossbard selected Amy Kassiola’s colorful mixed media “One Cycle of the Moon,” which depicts the egg of a woman’s menstrual cycle, as the starting point for viewing the 30 works by 27 local artists (25 women and two men), some of whom have participated in this annual show since the 1990s.

Kassiola’s piece, one of the strongest in the show, is followed by a variety of interpretations of the celebration of the New Month. Inspired by a variety of traditional and modern texts and commentaries provided by Grossbard, the artists took off in a myriad directions in terms of both message and media.

Some moved no further than “the recognizable symbol of the moon, sometimes more literal, sometimes more abstract,” as Grossbard noted. Others, explored topics related to the month of Nisan, the first month of the biblical year and the one during which the exhibition’s launch event will take place. Accordingly, the prophetess Miriam, water and the holiday of Passover appear in some works.

Others, like Kassiola’s, explore female fertility, cycles and rituals. Some of the most intriguing pieces depart from themes and images tied most closely and traditionally to Rosh Hodesh, and tackle ideas like the interplay between light and darkness, female and feminine self image, mother-daughter relationships, feminism and Jewish religious politics.

For the most part, it is the pieces that grapple with these themes that are also more visually compelling. Amid works of mixed media, acrylic on canvas, collage, and fabric art are ones like Laynie Tzena’s “Mirror, Mirror on the Floor, or The Evolution of the Feminine,” a large print on paper in the form of a rebus story as a sex-role autobiography, or commentary on “girl training,” as the artist puts it.

D. Jeanette Nichols’s “The Moon is in Mah Jongg” is a vivid watercolor, ink, and gold paint piece modeled on the floor of an ancient Beit Alpha synagogue floor in which she intermingles ancient astrological signs with symbols from the Chinese tile game beloved by Jewish women of leisure.

“Dark Radiance,” a collage made partially from minute pieces of newsprint in a hinged frame, was originally developed by Allen Shain for the illustrations for a book of poems by the same title written by Keith Gentzler. The poetry is about turbulent times in 1960s America, and the illustrations, when seen collectively, are a linear mandala, a diagram representing our universe and the waxing and waning of life using the moon’s cycle as a metaphor.

Elizheva Hurvich’s “Rosh Hodesh Reflection,” a mixed media work of mirror, plaster, photo, paint and wire, though not as polished as some of the other pieces in the show, draws the viewer in immediately, inviting her to see herself in the circle of life. “She takes personification to the limit with the use of the mirror,” Grossbard commented.

Barbara Cymrot’s use of glass, metal and plastic beads with copper wire and nylon thread in the intricately textured relief that is “Rosh Hodesh: New Moon Emersion” stands out in terms of media. Wendie Bernstein Lash’s “Hodesh Cycle,” a twelve-page book of hand-made paper with inclusions, and Juliette Hirt’s “Embrace (for Rebecca),” anchored by a clay hand sculpture, do as well.

The most political piece greets visitors as they enter the library. It is a quilt called “Rosh Hodesh by the Wall” by B’Yadeinu, a group composed of Diane Bernbaum, Carol Dorf, Karen Benioff Friedman, Rivka Greenberg, Shari Rifas and Claire Sherman. The women have taken a black and white screen-printing by Meara McDonald of an Associated Press close-up photo of Anat Hoffman clutching the Torah during one of the recent scuffles between The Women of the Wall and their opponents, and turned it into the center of a quilt bordered by the months of the Hebrew calendar printed in a raw, running red ink.

Finally, Aimee Golant’s “Rebirth and Rejoice” seder plate made of silver and tin alloy, with its place for the roasted egg, concludes the exhibition, bringing the theme introduced by Kassiola full circle — or more fittingly, full cycle.

View a slideshow of images from ‘Rosh Hodesh: Beginning and Renewal’: