Friday Film: ‘Mary Lou’ Is More Than the Israeli ‘Glee’ 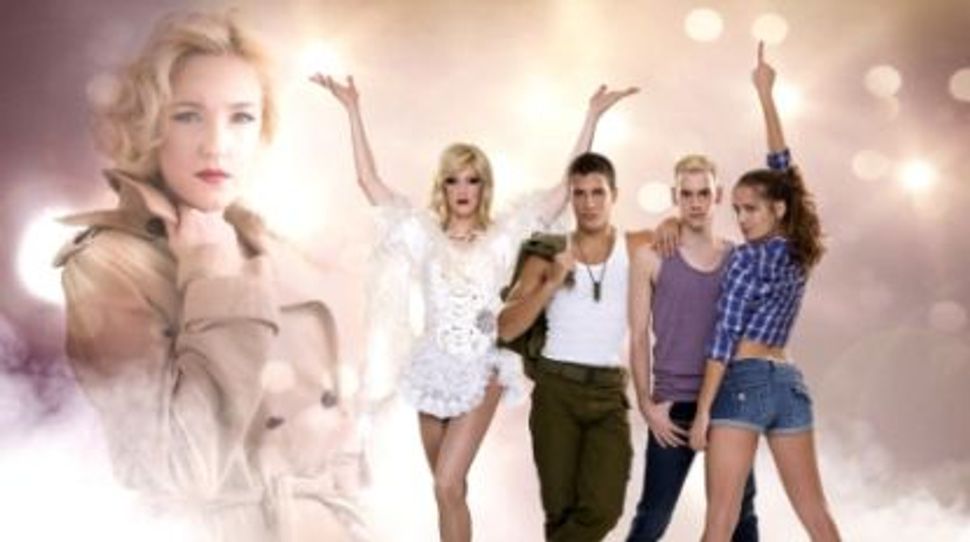 Early on, when our hero and narrator delivers the above line, one begins to suspect that “Mary Lou,” the infectious, surprisingly rich new musical drama from Israeli director Eytan Fox, has more to offer than sugary pop escapism, though it is generous on that front. Most of the major plot developments and character actions, courageous or not, are motivated by deep pathos, and that juxtaposition between sadness and sparkle lend “Mary Lou” its uniquely strange, fascinating character.

The film, which screened March 28 at the New Jersey Jewish Film Festival, began as a four part miniseries on Israeli television and won Best Miniseries at Israel’s annual television awards in 2010. It tells the story of Meir (Ido Rosenberg), a young gay man searching for his long-lost mother, Miriam (Maya Dugan), who calls herself Mary Lou. Mary Lou, who disappears on Meir’s 10th birthday, is an obsessive fan of Israeli pop star Svika Pick (her assumed nickname comes from one of his biggest hits), so Meir becomes convinced that she has run away to become the musician’s backup singer. It’s a lie that Meir tells himself, and anyone else who will listen, shortly after her disappearance; as he grows into an adult, he comes to believe in it heartily enough to make his own escape to Tel Aviv, certain he will find his mother there.

Along the way, he falls in with a company of drag queens, starting out as a dresser and eventually becoming a celebrated performer himself, using the name (what else?) “Mary Lou.” Meanwhile, Meir and his best girl friend, Shuli, both nurse an attraction to the same man, and Meir’s patient yet troubled father (the only person to whom Meir cannot tell a lie) struggles to maintain a relationship with his increasingly distant, difficult son. The story is set, “Mama Mia” style, to the music of Svika Pick, who makes an obligatory yet sweet cameo.

Even if “Mary Lou” had aspirations of being little more than toe-tapping, jukebox musical fluff, it would be a perfectly agreeable way to spend two and a half hours. Pick’s music is catchy and masterfully employed, acing my grandmother’s chief test of a good musical: two or three songs should be stuck in your head the next day. The cast is made up of consistently excellent singers, headed up by Rosenberg, whose clear, ringing tenor and versatile delivery should make the male cast members of “Glee” thankful he isn’t in the U.S. to take their jobs. The choreography, too, is expansive, sharp, and euphoric, particularly the large group number where Meir finds himself in a Tel Aviv drag club for the first time.

But a moving, tight, and occasionally heartbreaking script carried out with exceptional performances help make “Mary Lou” much more than simply just good fun. As a central gay character, Meir is refreshingly complicated. In the same vein as the “magical negro,” portrayals of gay men in television and movies have a tendency to be noble and precious, two things that Meir is decidedly not. A compulsive liar who betrays or shuts out nearly everyone who loves him, he infuriates and disgusts even as you root for him to find his mother, become the superstar, get the guy.

The film further touches on the abuses and humiliations that gay men face on a daily basis, but that doesn’t mean that it casts them as completely passive, helpless victims. Some violent, inexcusable things happen to Meir and his drag sisters as a result of their sexual orientation and work, but they aren’t stripped of all agency. In one of “Mary Lou’s” thornier sections, for example, the drag queen Sunshine (Ori by day) picks up an assumed straight man in a car. When the man discovers that Sunshine is not a woman (though he likely knew already), he becomes violent, but not before Ori forces the issue further. It’s a gutsy, problematic scene to include, and while the film takes pains to emphasize that what happens to Ori is nothing short of wretched, it doesn’t portray him as a wounded puppy, either.

Nancy Fishman Film, An American distributor, picked up “Mary Lou” at the beginning of the year, and the film is currently making the North American and international festival rounds, promoted as the Israeli “Glee.” It’s a solid marketing strategy, no question, but it doesn’t give “Mary Lou” enough credit.

Friday Film: ‘Mary Lou’ Is More Than the Israeli ‘Glee’