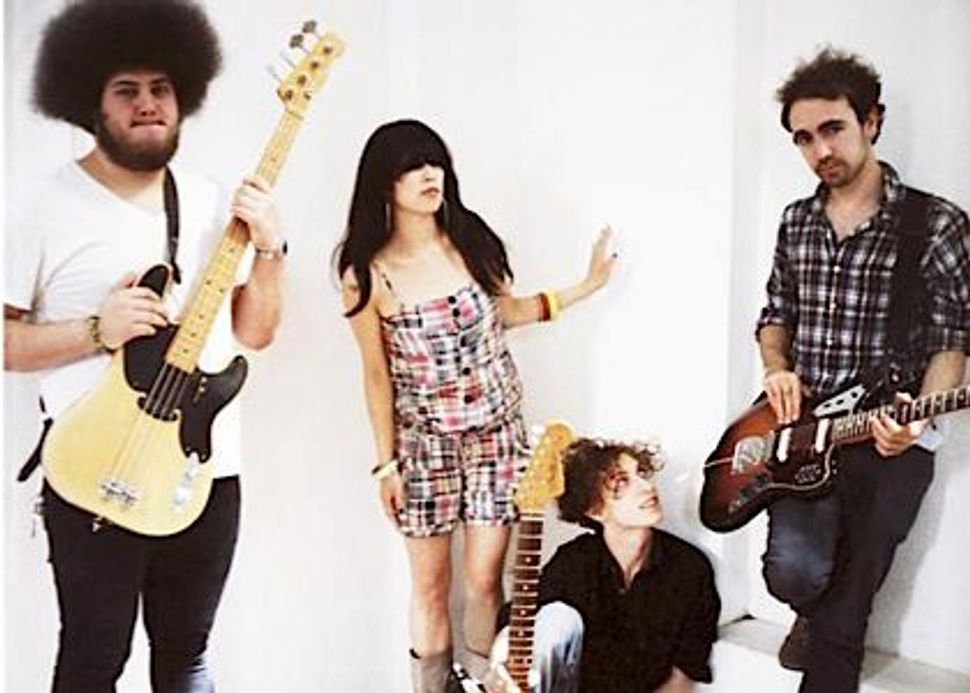 Having launched their self-titled debut album in February and now embarking on an American tour, British indie-rock band Yuck are causing quite a stir. A successful stint playing to crowds at the South by Southwest festival in Austin, Texas last month generated a great deal of conversation, particularly in the blogosphere. On April 6 the band took the top spot on Hype Machine, a buzz tracking system that aggregates information from more than 1,000 music blogs worldwide, making Yuck, unofficially, the world’s most talked about new band.

“Right now Judaism isn’t a huge part of my life,” said Bloom in a telephone interview with the Forward, “but we definitely grew up in a Jewish environment. My mum taught Daniel and me in Hebrew school.” Blumberg later met Rogoff who was date farming on a kibbutz during a birthright trip. They connected, and Blumberg convinced the New Jersey native to give up his degree in communications. Eight months later Rogoff relocated to London and joined the band.

With their weighty rhythms, distorted guitar rifts and poppy retro vibe, the band has drawn comparisons to older groups such as Dinosaur Jr., Sonic Youth and Neutral Milk Hotel. Their sounds vary dramatically from track to track, from the soaring guitar anthem “Get Away” to the quieter, stripped-down sounds of “The Wall” to the hypnotic underwater feel of “Rubber.”

So, do they love the ’90s? “When you make music, you don’t really think about what you’re doing,” said Bloom. While working on their album, he listened to a lot of guitar music, especially The Zombies. “In a really loose way, the melody of a song is what grabs us the most,” he said.

Though only in their early 20s, for Bloom and Blumberg, this is not their first taste of success in the music industry. They were previously in a promising band named Cajun Dance Party while still in high school. The band split soon after the debut of their first single: “The band just broke up because we weren’t really into it anymore,” explained Bloom.

As if the prospect of an American tour and continuing acclaim wasn’t enough, Blumberg is also set to launch solo projects under the name Oupa. He will release a seven-song album “Forget” this June.

Watch the video for ‘Get Away’: