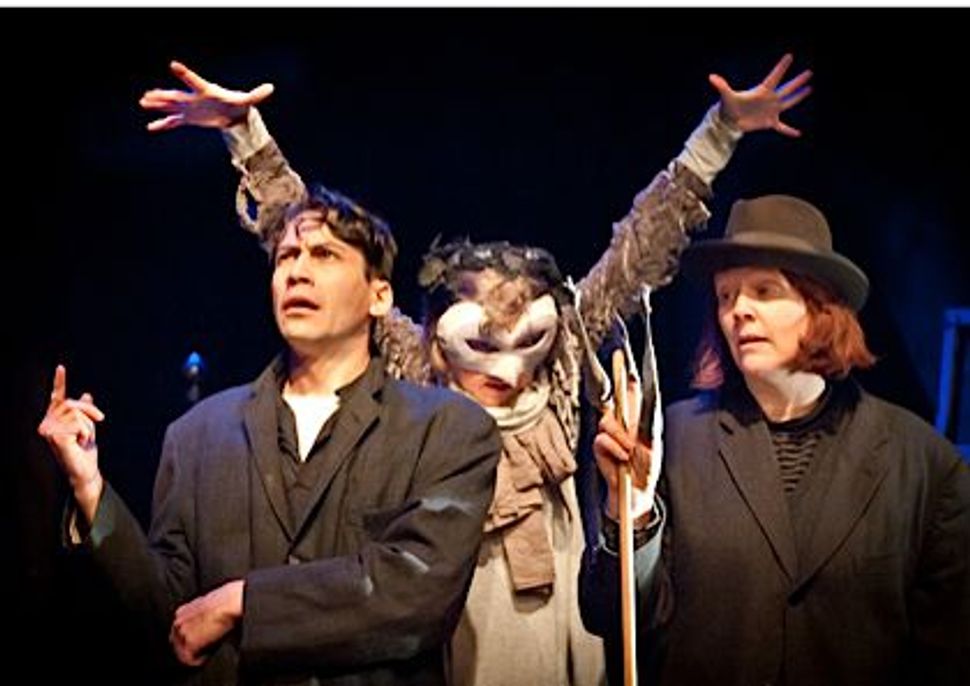 In its evocation of “Terezin humor” — the grim recognition that if we didn’t laugh, we’d hang ourselves — “Mr. M,” by the Czechoslovak-American Marionette Theatre, is both the same as, and unlike, every other Holocaust play you’ve ever seen. The play, which runs at the Theatre for the New City through May 1 and at the JCC in Manhattan from May 5 to 8, draws on familiar themes, but does so in an altogether original way. It is performed in the “zivacek” style of Czech theatre, in which the cast, some of whom work with puppets, nonetheless remain visible throughout. In practice, the technique gives the story a beautifully layered feel, in which each object holds the potential to be several things at once.

The story is adapted from the novel “Mr. Theodore Mundstock” by Ladislav Fuks, the postwar Czech author, and concerns the life of an ordinary Jew in 1942 Prague as he awaits his summons to the concentration camp. While his neighbors worry about the fate of their furs, Mr. M, who lives with a pigeon named Chicky and a dour shadow-self in the form of a finger puppet, resolves to prepare for the transport. He picks fights to “get used to being a punching bag,” practices fooling imaginary SS officers, and sleeps short hours on an uncomfortable bed. While he does this — rather cheerfully — Mr. M reassures his neighbors as to their uncertain fate, recognizing their need to deny the inevitable, and sharing his techniques for success.

On the sparsely furnished stage, props become characters: The SS officers who disturb Mr. M’s dreams are played by a bunch of boots on strings, marched across the stage on a sort of harness. A delicate shower of giant paper petals from the sky become, a scene later, garbage to be cleaned. Appropriately for a story in which the fate of possessions is of the essence, “Mr. M” is as much the tale of objects as of people. There is a bed that is a window, a car and a shelf; a stove that is a drawer, a cart and a suitcase. Similarly — though with less success — the scenes in the play, written and directed by Vit Horejs, transform themselves, so that nothing is quite what it seems: Mr. M’s packing stratagem becomes a dancing lesson; reading the mail, a Punch and Judy show.

Unfortunately, the mutation of one scene into another and of reality into dream also causes a thinning out of the story’s substance, and by extension of its drama. Events, characters, past-lives and emotions are suggested, but never really probed — who are the black marketeers that Mr. M meets in the forest? Who is the woman whose shadow speaks to him from behind a frame? What of the little boy Shimon whose name is mentioned from time to time? At first, one is a bit curious about these things, but in the end they cease to matter; the story — and Mr. M himself — appear unaffected by the answers. The stage, spare and flexibly furnished like a warehouse or a station, seems to await more activity than ever arrives. In the meantime, there is a good deal of dancing.

The actor Ronny Wasserstrom, who plays the titular character, is a motile comic, with the loose-limbed grace and exaggerated facial expressions of a silent movie clown. Yet, like the play itself, he doesn’t reach deep enough into the tragedy of the character he portrays. In his hands, Mr. M’s routine as he prepares himself for life in the concentration camp feels more like defeat than reassurance. While it is obvious that he is deluded — lying to himself and others about the Jews’ control of their fate — it is disconcerting that the character seems unchanged by the invention of this plan. Consequentially, there is no tragedy in his determination to “make ‘em laugh,” popping his false teeth in and out for the amusement of the SS. Nor is there much of the triumph promised by the playbill — his glee feels neither false enough to be pitied nor genuine enough to celebrate.

The play’s sense of dramatic thinning is saved somewhat by the accompaniment of the very fine Yiddish singer, Adrienne Cooper, whose powerful yet nimble voice was perhaps the best actor in the piece. Backed by an accordionist, her singing carries the feeling and drama that is absent in the rest; it is as though someone were explaining to us what the play was intended to make us feel. If the rest of the play were able to capture the movement of Cooper’s voice, its shades of feeling leaping from ambiguous joy to halting resignation, it would be a more successful recreation of Fuks’s tale.