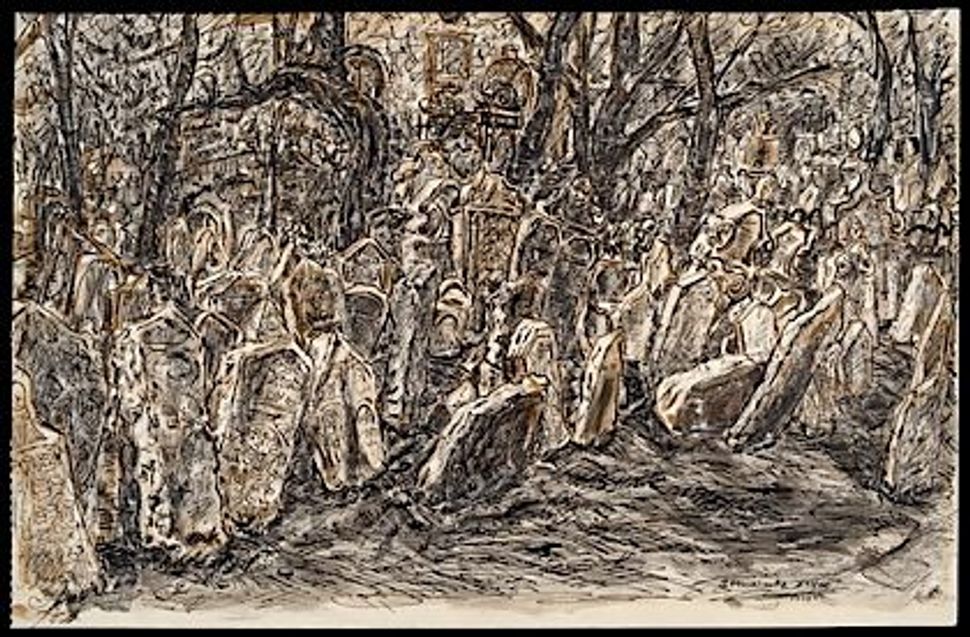 It is hard for me to accept that it has been four years this weekend since my mother, artist Shirley Moskowitz, died in Santa Monica, Calif., at the age of 86.

I’ve written about some of her art before, and though Jewish themes were not a major preoccupation in her work, I thought I would remember her by posting a few of her explicitly Jewish works, many of which will be unknown to her friends and even family members. Several of Shirley’s earliest works — or at least those that survive — are of Jewish subjects, reflecting a strong Jewish presence in her life, especially through the Susnitskys, her mother’s extended Texan-Jewish family. Her first published drawing is of her Hebrew teacher, submitted to the Jewish youth magazine Young Israel when she was fifteen.

View a slideshow of artworks by Shirley Moskowitz:

Later, in the early 1960s, she carved a series of Jewish figures that are essentially nostalgic, and these look back to her childhood memories of attending religious services at her grandfather’s synagogue in Brenham, Texas, and perhaps again to her Hebrew teacher. Three works — “Der Chazin,” “The Rabbi” and “Olenu” were carved during a period when she was most involved with a Jewish community, but in a thoroughly modern way. My family moved into its second suburban home in 1959, a new split-level house in a new housing development outside of Philadelphia. We three children were soon all attending afternoon Hebrew school twice a week and “Junior Congregation” on Saturdays at the Norristown Jewish Community Center, in nearby Norristown, Pa.

These three sculptures were carved during her Wednesday night carving group that met at the studio of Hans Huneke in Norristown, and they reflect Shirley’s acute awareness of Jewish tradition, but seen through a nostalgic lens. Though I never heard her talk about it, these works might also be as much about a lost Jewish Europe as about a lost Jewish Texas. All her carving companions at Hans’s studio were acutely aware of what had happened in Europe. Artist Steffi Greenbaum was a refugee from Berlin. Hans was a non-Jewish anti-Nazi Socialist from Germany and his wife Dini was Jewish. Bernard and Ruth Petlock were also sometime part of the group, and Bernie was born in Bialystok. Another good friend of this group was local artist and Holocaust scholar Mary Costanza.

After 1963, however, Shirley moved away from these themes and subsequently most of her carving centered on groups of figures, usually with children, representing families. This theme more clearly reflected the suburban world around her, where streets, sidewalks and backyards always seemed full of us babyboom kids.

About the same time Shirley was making her “Jewish” carving she also made a few collages and several lino-block prints based on Jewish holidays and celebrations. I think the prints were primarily made to have a ready source of gifts for the seemingly never ending births, weddings and bar and bat mitzvahs of the 1960s.

Most of Shirley’s work during these years was based on her travels, especially long family trips to Europe in 1959, 1962, 1966 and then a three-year stay in Italy from 1970 to 1973. She tended to sketch and paint landscape and city scenes outside but often work these into collages and, especially after 1970, prints. Though we often visited Jewish sites on our travels, she only sketched a few. One of her favorite pen and ink works is a beautiful view of the Old Jewish Cemetery in Prague done when we spent the summer in Czechoslovakia in 1966. She later made fine print from this. She also turned a little sketch of the Western Wall in Jerusalem made on a visit to Israel with her mother and aunt in 1971 into a lino-block print, shown here. Later, when two of her three children were involved in the world of Jewish monuments and travel, she made a few more works, as I have previously shown.

In sum, my mother was more an “artist who was Jewish” than a “Jewish artist.” She would not reject the title but would insist — correctly — that while her Jewish work was important to her, it is not representative in quantity or quality of her artistic output as whole. She was, however, as Rabbi Laura Geller stated in her eulogy four years ago, a woman of valor in the Jewish tradition.