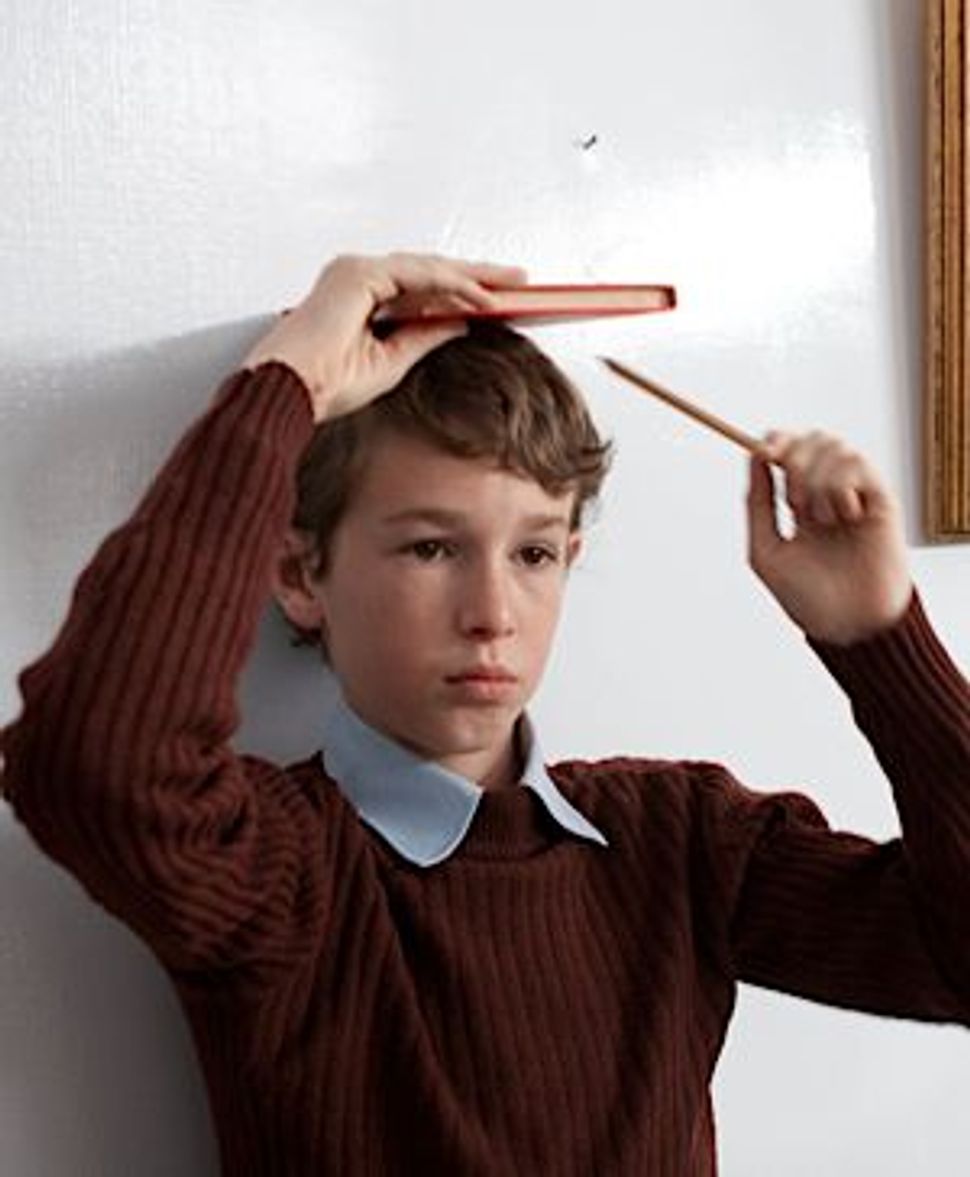 “Intimate Grammar,” which opened the New York Israel Film Festival on May 5, takes this gloomy heart of the Peter Pan story and sets it in 1960s Israel, in the years leading up to the Six Day War. Based on the critically lauded novel “The Book of Intimate Grammar” by David Grossman, the film chronicles the arrested adolescence of Aharon, played by a wistfully adorable Roee Elsberg. A whip-smart, artistic child, Aharon is stuck in an ill-fitting blue-collar family that, because of the too-recent Holocaust, fears and scorns Aharon’s sensitivity and formidable intellect (“The in’electuals and the artists were the first to die there,” his father cautions).

More serious, his body is developmentally stuck, just on the cusp of adolescence. Small for his age at 11, Aharon begins to notice certain changes in his peers, like armpit hair, which he marks worriedly in a notebook. Two years later, when everyone around him has been thrust headlong into the awkward business of puberty, Aharon remains a child against his will, left behind by his growing friends. He can’t join the Israeli Youth Guard; a doctor mistakes him at 15 for a 10-year-old. He competes with his best friend, Gidon, for the affections of a girl, knowing that he will inevitably lose. “Maybe I’ll stay like this forever, with only my thoughts growing up,” he worries in voiceover. Aaron’s rough, overbearing mother blames him, hypersensitive (especially in an uneasy, post-Holocaust Israel) to the perception that she is underfeeding him.

This central story, of a gifted young mind watching helplessly as his world passes him by, is where the film is at its strongest and most coherent. Elsberg’s performance, too, is achingly mature, a heartbreaking portrayal of Aharon’s steadily escalating anxiety and eventual breakdown. “They’re starting off on their road to death, and I haven’t yet,” he muses.

Unfortunately, the rest of “Intimate Grammar” is bit of a mess. I have not read Grossman’s book, but I got the impression that director and screenwriter Nir Bergman tried to cram too many of its plot elements into an hour and 45 minutes, failing to flesh out most of them. There’s Aharon’s parents’ crumbling marriage; his dying, neglected grandmother; a brief glossing-over of the great capers Aharon and his friends used to enjoy in their youth (like Peter Pan, he is their ringleader before everyone grows up, a shifting and interesting dynamic that is barely acknowledged). Despite all of these competing narratives, the film drags to a near halt somewhere in the middle, spending loads of time on a lonely, beautiful neighbor (Evelyn Kaplun) who nearly goes broke paying Aharon’s father to do odd jobs around her house and keep her company. I suspect that very complicated factors motivate both the continuation of a frayed marriage and the excruciatingly slow, visible affair between the father and the neighbor, but I have no clue what they are.

Even so, “Intimate Grammar” is lovely and haunting, and the final few minutes, in which Aharon descends into a madness worthy of the most tragic opera heroines, will be seared into my memory for a while. I should add here that the film looks absolutely beautiful, capturing the softness of fading daylight better than almost anything I’ve ever seen.

Watch the trailer for ‘Intimate Grammar’: