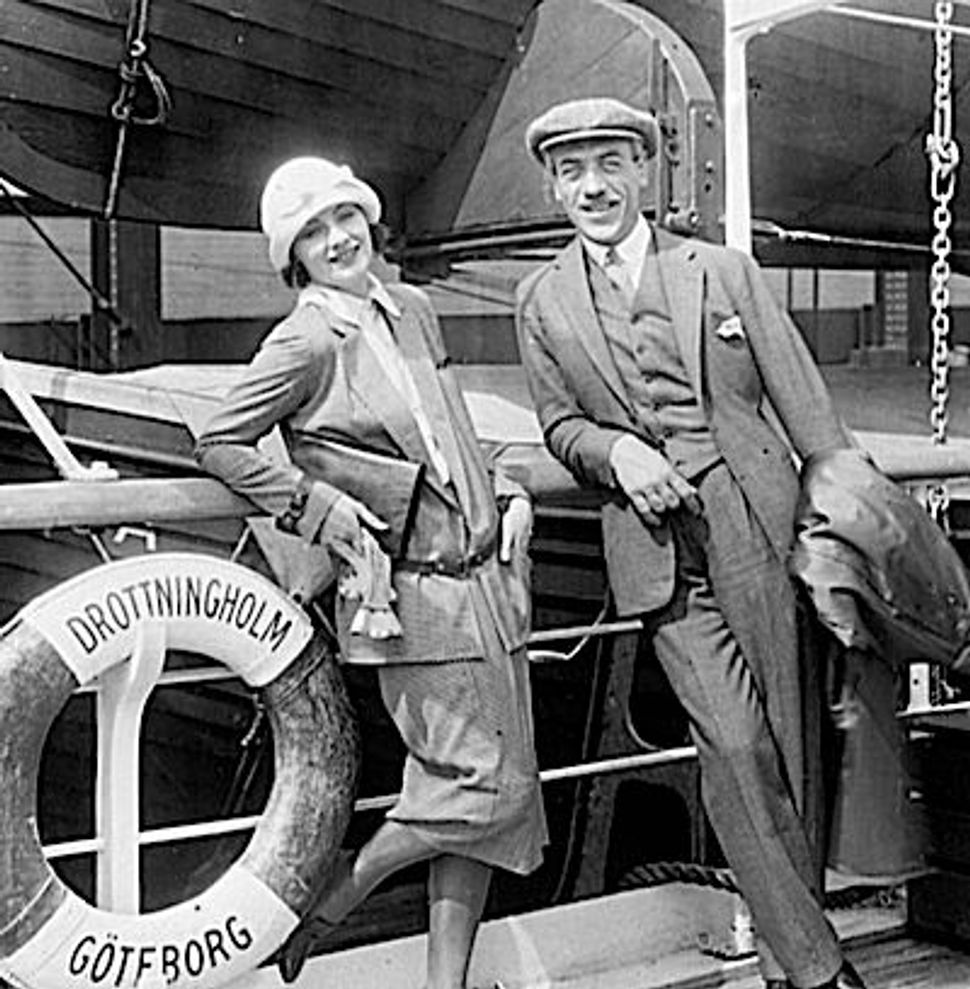 Greta Garbo, who died 21 years ago on April 15, is a permanent screen legend, as last year’s lavishly illustrated “Greta Garbo: The Mystery of Style” by Stefania Ricci from Skira Publishers, reminds us. Yet director Mauritz Stiller, who discovered Garbo and made her a star, remains an enigmatic figure, as “Nordic Exposures: Scandinavian Identities in Classical Hollywood Cinema,” out in October, 2010 from The University of Washington Press establishes.

Its author, Arne Lunde, teaches Scandinavian literature at UCLA. Lunde explains that Stiller, although he made a career in Sweden before moving to America, was born Moshe Stiller in Helsinki, Finland, to a Jewish family of Russian and Polish origins. Stiller fled his homeland to Sweden to avoid serving in the Russian army during World War I.

Stiller’s Judaism was commented upon in a 1933 Screen Pictorial account published in Britain, written by a former Swedish interpreter who worked with Garbo. The article describes Stiller as a Svengali-like figure — a familiar coded anti-Semitic stereotype — whose “hypnotic power… transformed the ordinary, obscure Swedish girl into the exotic star.”

Stiller is further characterized as “ugly, almost hideous in physical appearances. His body was ungainly, his features heavy, lined, gnome-like… In his veins flowed a mixture of Nordic-Slav-Jewish-Magvar blood — a chemical mixture sufficient to create almost any sort of explosion.

[Austrian Jewish director Josef] Von Sternberg [who discovered Marlene Dietrich] is also a strange racial mixture.” Unlike Sternberg, however, Stiller was gay, which placed him in yet another minority group. Stiller’s Hollywood films such as “Hotel Imperial,” Lunde intriguingly suggests, reflect “these multiple, ambivalent selves.” Tyrannical and with a poor grasp of the English language, Stiller squabbled with producers and alienated stars (he ordered one leading man to wear huge boots to make Garbo’s notoriously large feet look smaller by comparison).

Fired from MGM, Stiller died in 1928 at the age of 45, apparently of tuberculosis. Yet his influence continued through the German Jewish director Ernst Lubitsch, a fan of Stiller’s racy 1920 Swedish film “Erotikon,” and Lubitsch’s disciple, the Galician-born Jewish director Billy Wilder, who remade “Hotel Imperial” in 1943 as “Five Graves to Cairo.” Stiller’s legend lives on through historians such as Lunde and the British film critic Alexander Jacoby, as well as through a star on Hollywood Boulevard which, continuing the theme of Stiller’s confusingly complex identities, in 1960 first paid homage to a nonexistent Maurice Diller, until in 1988 this was finally corrected to Mauritz Stiller.