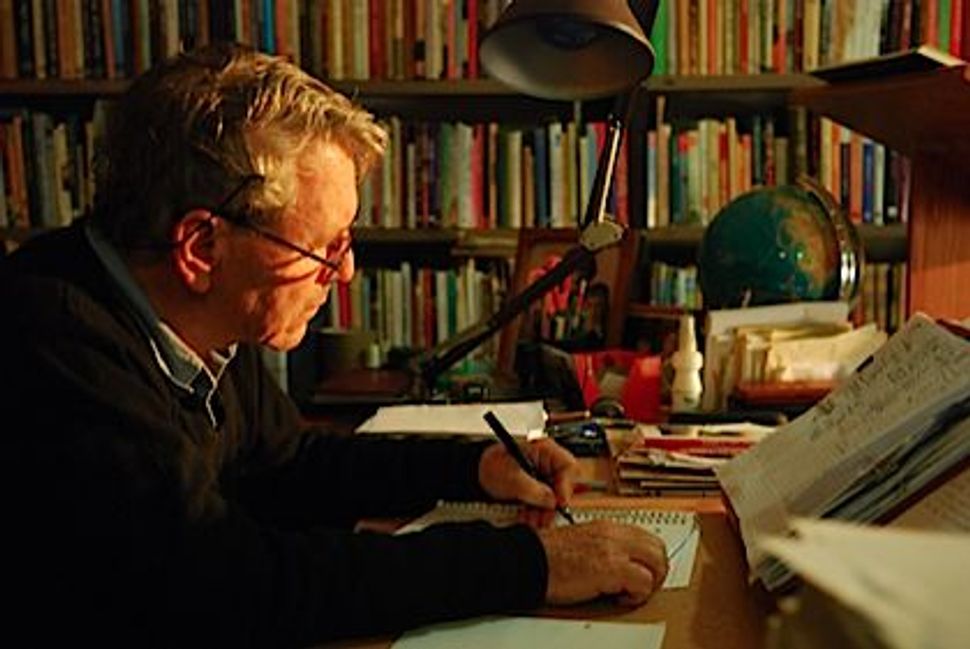 Yonathan and Masha Zur’s recent documentary “Amos Oz: The Nature of Dreams,” screening May 17 at the New York Israel Film Festival, expertly circles around the question: What is the place of politics in literature, and vice versa? For Oz, the two cannot be disentangled. “To write what they call ‘universally’… how is it possible?” Oz asks at the opening of the film. For him, the writer is inextricably tied to the time and place in which he writes; like it or not, he is as attached to the sounds, smells, and sights of the world that surrounds him as he is to the language he uses to express his thoughts — its syntax and vibrations, its sound, its history. These details seep into his literature whether he is conscious of it or not. In telling his own story, as Oz has done in his 2002 memoir, “A Tale of Love and Darkness,” he inevitably also tells the story of a particular place and time (in the case of the memoir, it is the story of Jerusalem in the 1940s).

Oz’s persistent desire to voice his opinions about Israel’s politics — specifically, his support, among other things, for a two state solution — has made him a target of the political right and left, as he acknowledges. Yet it is his ability to speak and write about life, love, and politics in a way that is both accessible and poetic that has made Oz’s voice so difficult to ignore. “Israel is a dream come true and as such it is disappointing,” he tells an audience at Columbia University. “The taste of disappointment is in the nature of dreams.” During this same visit to New York, at a gathering at the Israeli Consulate, Oz runs into Salman Rushdie, who asks him what he is lecturing about at Columbia. He says he is giving one lecture on literature and two on current affairs, and he will be saying what people (specifically, he says, New York Jews) don’t want to hear. “You are the person to say these things,” Rushdie tells him. “I’m sorry, but this is your fate.”

“The Nature of Dreams” is a moving and beautiful film that captures this literary and intellectual giant in a variety of locations over time. It includes footage of Oz offering his advice to Shimon Peres, walking in Jerusalem in conversation with Palestinian intellectual Sari Nusseibeh, lecturing and giving interviews around the world, scribbling in his notebook, and strolling on the streets of Dusseldorf, Germany, after he has received the Heinrich Heine Prize. The film also contains snippets of Oz reading aloud from his memoir and discussing his childhood and family history. “I had no idea when I wrote the book that it would capture this period of time. It was a family history,” he says. Indeed, Oz’s ability to zero in so astutely on the details of his life and surroundings — on those memories and experiences that most move him — is what has paradoxically led him to become Israel’s most translated author. His most particular memories and descriptions have a sound and texture familiar to anyone who has ever paused and groped to locate a lost moment in time. “The hardest part,” Oz says, “is being precise. My work is the work of precision.”

Watch the trailer for ‘Amos Oz: The Nature of Dreams’: