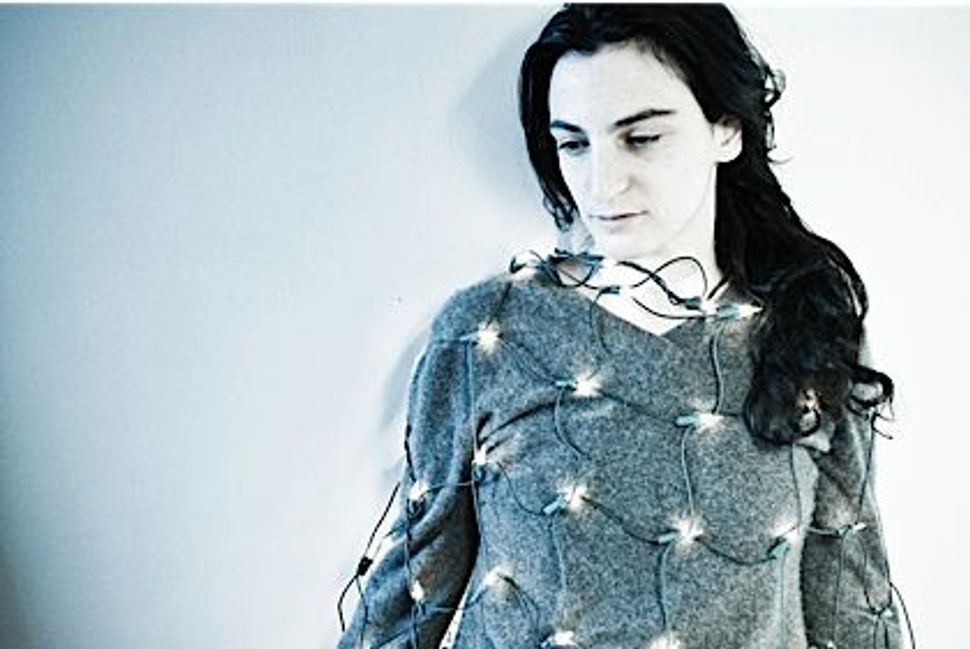 Orit Shimoni is a singer-songwriter in perpetual motion, with little slowing her down as she travels from city to city, gig to gig. But it was a 2008 first-time visit to Berlin that gave her uncharacteristic pause. She had gone to the German capital to check out the music scene, where, she said, “you can show up and let things happen… Berlin is a hot spot for people who are just hovering.” Yet she couldn’t ignore the fact that she was a Jewish person in Germany and consequently grappling with being both “comfortable and uncomfortable” there.

From this tension emerged an album’s worth of songs, which Shimoni recorded live and has just released as “Sadder Music: Live in Berlin” under her performing alias, Little Birdie. The 10 tracks on this, her third independently produced album, are fine examples of her intimate and direct style, regardless of whether you label the album folk or country. Her sound, which is hard to pin down, is actually a bit of both. Shimoni herself likes to refer to it as “dark country.” She sings lead vocals, plays acoustic guitar and is backed up by a band that includes violin, electric guitar, bass and percussion.

Of her approach to singing, the angular, dark-haired Shimoni said, “I don’t hold back, and I don’t censor myself. Things just happen on their own and then I analyze them later.” The same applies to her songwriting, which she describes as “in response to my personal experience, but done in a way that is as universal as possible.”

Indeed, there is no mistaking that the 32-year-old Shimoni is singing as a Jewish woman and writing from a liberal Jewish ethical stance, but not many of her songs are explicitly Jewish. The one exception on “Sadder Music” is the fifth track, titled “Old Synagogue.” She told The Arty Semite that this was the one song on the album that she did not write in Berlin, but when she returned home to Canada. It is about her re-evaluating her religious identity in light of her experiences in Berlin as she celebrated Shabbat at an old declining congregation (recognizable to locals as Anshei Minsk Synagogue, or the “The Minsker”) in downtown Toronto’s Kensington Market.

Other songs on the album, some ballads, some up-tempo numbers, deal with issues and people that Shimoni encountered while in Berlin. “The River Banks” is about urban gentrification and displacement. In “Old Woman,” Shimoni tells of her uncomfortable interactions with an elderly woman with dementia who roamed the streets of her neighborhood. “Walls” recounts a conversation the singer had with a woman she met in a bar who told her about her memories of when the Berlin Wall came down, which, in turn, made Shimoni think about the separation wall between Israel and the Palestinian Territories that had recently gone up.

The song titled “Survivors” seems fitting on an album about a Jew’s experience of Berlin. But this song is not about Jewish Holocaust survivors; instead it is “more about them than about us,” Shimoni explained. “It’s about young Germans. I had never before realized how they are dealing with the guilt.”

The worldly and emotionally intelligent lyrics of these songs reflect Shimoni’s rich life experience and accomplished academic background. Born in England to an Israeli father and a Canadian mother, she grew up with two older sisters in Jerusalem and later Calgary, Alberta. She moved back to Israel after high school, where she earned an undergraduate degree in English at the Hebrew University in Jerusalem. Later, she relocated to Montreal and taught in Jewish schools while pursuing a master’s degree in theology at Concordia University.

A self-taught musician, Shimoni had always played and written songs, but for many years she did it only on the side. “It took a long time to clue in to my wanting this to be my career,” she said. Fortunately for us, she has decided to go where her heart and talents lead her, be it to gigs across Canada or on tour in Europe, where she is performing this spring. Once you have heard “Sadder Music,” you’ll want to know what will follow.