Ladies’ Night at the O.K. Corral 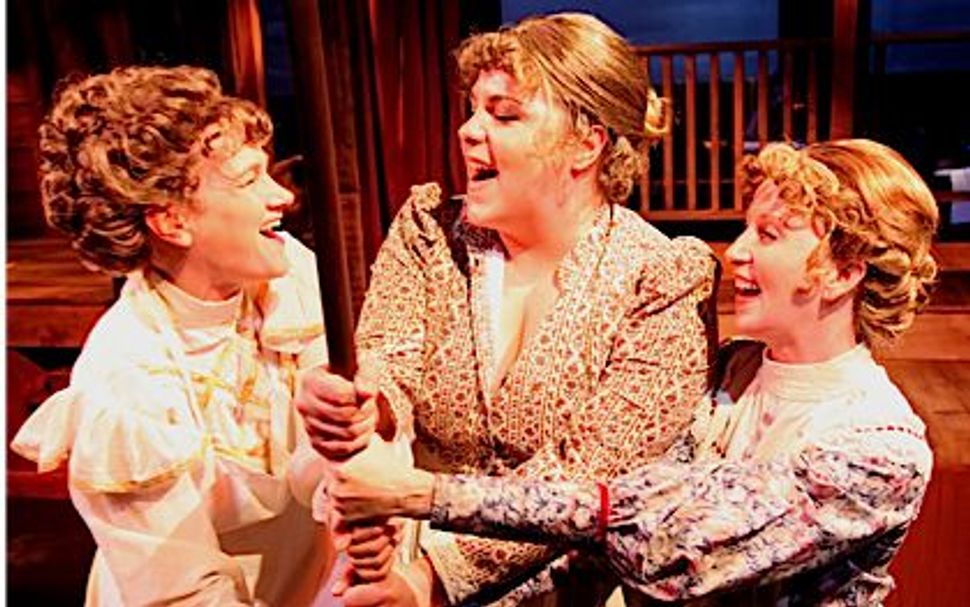 Wyatt Earp is buried in a Jewish cemetery outside of San Francisco. Who knew? The hero of the Gunfight at the O.K. Corral was married to a naughty-but-nice Jewish girl. Born in Brooklyn to German-Jewish émigrés and raised in San Francisco, Josephine Sarah Marcus ran away at 18 from her middle class folks to Tombstone, Arizona, to take a job as a chorus girl.

Josie is the subject of a new musical, “I Married Wyatt Earp,” making its New York debut at 59E59 Theaters on May 26, and running through June 12. That is also the title of Josie’s own book, “I Married Wyatt Earp: The Recollections of Josephine Sarah Marcus Earp,” published by the University of Arizona Press in 1976. The play’s cast of 11 is made up entirely of women, with music by Johnny Mercer Award-winner Michele Brourman, who has written for Olivia Newton-John and Michael Feinstein.The book is co-written by Thomas Edward West and Sheilah Rae, and the show is directed by Cara Reichel and choreographed by Joe Barros.

It was Rae who first discovered the story, in a book about pioneer Jews. She was struck by a photograph of a woman, presumed to be Josie, in sheer chiffon — racy for her day, and kind of “va-va-va-voom” even now. Rae says that Josie ran away to follow a crush she barely knew — John Behan, the sheriff of Tombstone. She auditioned for a traveling production of “H.M.S. Pinafore” because the Arizona city was on the itinerary.

Her parents weren’t thrilled about that, but, said Rae, “there were a few Jews in the Arizona territory at that time, and her parents actually called on friends who owned Meyer’s General Store to look out for her.”

The play focuses on the women in Tombstone and their impact on the Earp family. Josie harbored guilt about Earp’s first wife, a laudanum addict who eventually overdosed and died. In the play, the story is told in two time frames — one at the end of Josie’s life, and one in flashback. The older Josie is played by Carolyn Mignini, while Josie aged 18 to 20 (she and Earp were only in Tombstone for two years) is played by Mishaela Faucher, who hails from Phoenix herself.

“The show talks about how beautiful Tombstone is, how the skies are the color of amethyst. I’m very familiar with that,” Faucher said. “I know how lonely you can feel, like you’re the only person in this gorgeous mountain area. Josie wants room to breathe, and I understand that when it comes to Arizona.”

Her own grandfather was a bullfighter and a cowboy in the rodeo, and he’s told her about that life. But when in the play someone says “we’ve never seen a Jewess before,” Faucher can’t relate to that. Her mother’s side of the family is Jewish, including her bullfighting grandpa.

Wyatt Earp, Bat Masterson and the other famous names from the O.K. Corral are not in the play because, said Rae, “the minute you put them into the story, it becomes their story. There have been 53 movies about Wyatt Earp.” Instead, she wanted to focus on these women and their influence, as they lived with the fear that their loved ones might never return. Rae and composer Brourman also ran away from Jewish families to be in show business. “I’m sure my father thought I’d be back in six months, and I wasn’t,” Chicago-born Rae laughed. “I just got an e-mail from a young actress in California who said, ‘I just so identify with Josie Marcus, but I haven’t found my Wyatt.’”

Faucher loves that that Josie was a bad girl. “When she came to Tombstone, she stirred everything up. She’s part of the reason the shootout happens; when she breaks up with Behan he becomes very jealous. She was a mistress.”

Other Woman, yes, but she was also the Final Woman, living with Earp for 40 years. Although the title of the play may not be true: Josie claimed she and Earp were married, but historians think that she was a common-law wife, like the first one. Nobody has found a piece of paper (let alone a ketubah). She outlived her husband by 15 years (dying in 1944), and held court in Hollywood, with Gary Cooper at her feet.

Ladies’ Night at the O.K. Corral