Yiddish Songs and Workers’ Rights: Notes From the PJA Dinner 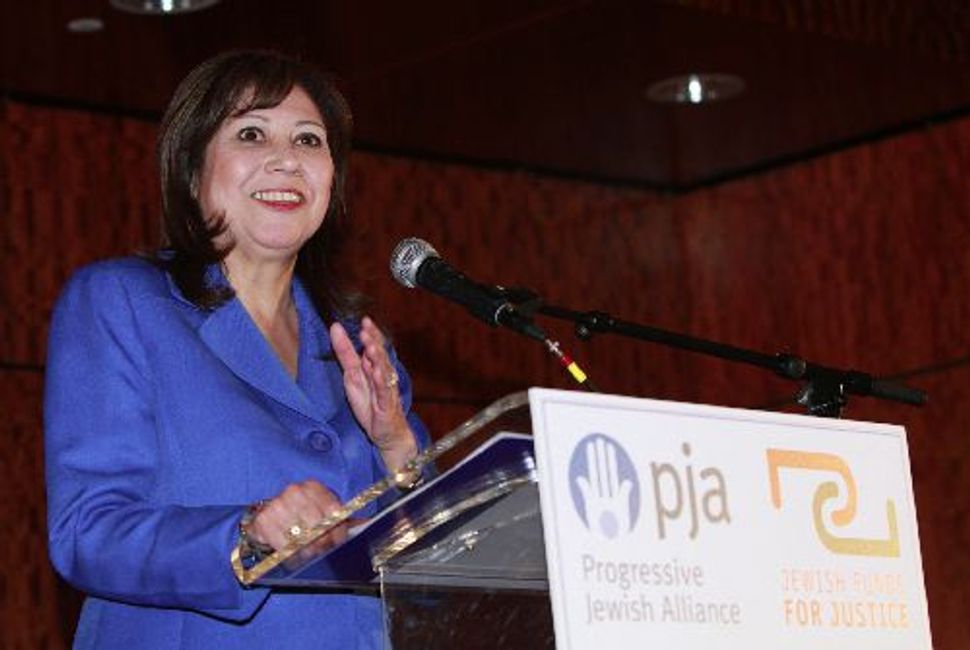 Image by Courtesy of Jewish Funds for Justice

A couple of things became apparent during the Progressive Jewish Alliance’s annual gala in Los Angeles last week, factors which will surely shape the run-up to the 2012 election. These factors did not include the “Yiddish songs of the labor movement,” which were performed entertainingly enough by singer Cindy Paley as guests shmoozed pre-dinner, but are unlikely to be adopted as campaign anthems unless David Dubinsky rises from the grave and runs for office.

The fund-raising dinner held at Temple Sinai in Westwood, where the merger between the PJA and — what’s that other org? many of the evening’s speakers joked — ah yes, the Jewish Funds for Justice was officially announced, also featured as guest of honor U.S. Secretary of Labor Hilda Solis. A Latina and an L.A. native, Solis extolled the virtues of the country in which she rose from humble origins to a cabinet post. She received warm applause for praising the community organizer’s vocation, to which many in the packed banquet room, including Freedom Rider and PJA-founding member Ralph Fertig, had been called.

The warmest applause, however, came at the point in Solis’s speech when she hailed her boss, the President (another community organizer), saying she would be happy to serve Obama for another four years. And from the room’s unanimous reaction it was clear that the White House is wasting no time mobilizing its potent force of surrogates who are already on the campaign trail, firing up the Democratic base.

The second factor was the newly announced first campaign by the Merged Entities (a committee is deliberating on a new name for the org) championing the Domestic Workers Bill of Rights. The push for “ethical employment practices” urges employers to provide a living wage, overtime pay, insurance and contractual guarantees to household help. Two bills are currently moving through the legislative process — one in New York and the other in California, where last week PJA/JFJ activists lobbied lawmakers in Sacramento, and helped move AB 889 a few steps closer to passage, making the Merged Entities a political force as well as a force for change.

For as the Merged Entities continue to raise the labor issue in the coming months, more perilous looms the political pitfall for any candidates with an illegal nanny, undocumented yard worker, or repairman who might feel ill-used or underpaid. Squads of journalists are undoubtedly at this moment staking out playgrounds, eying those Spanish-speaking stroller-pushers and their blue-eyed charges, and chatting up the day-laborers outside Home Depot, the Domestic Workers Bill of Rights in hand, to catch unwary politicos.

Stay tuned for the next Nanny-gate, as well as the Merged Entities’ new name.

Yiddish Songs and Workers’ Rights: Notes From the PJA Dinner