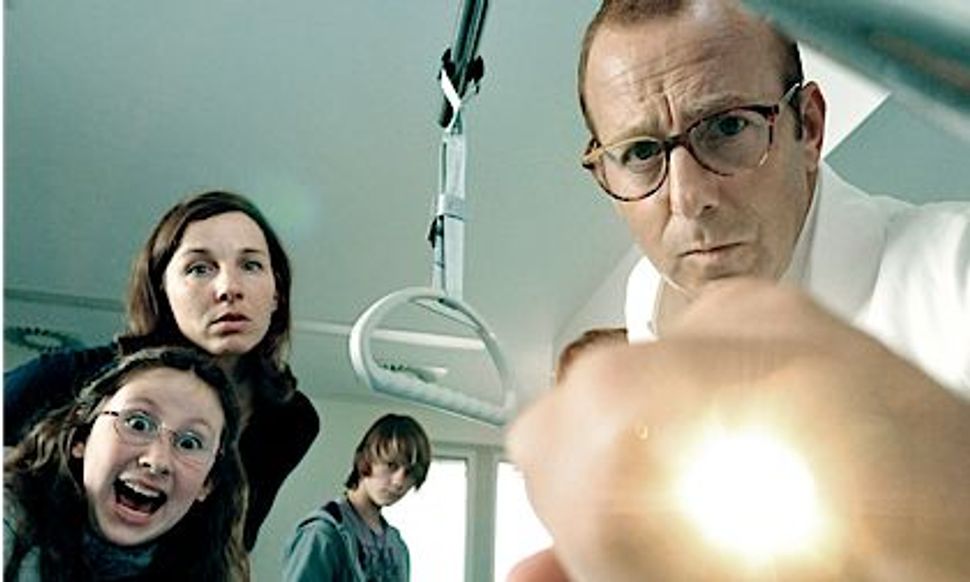 Talk about baring all for your art. German-Jewish director Dani Levy does Woody Allen one better in “Life Is Too Long,” which made its North American premiere at the Toronto Jewish Film Festival in May. A dyspeptic “Stardust Memories,” “Life Is Too Long” both exposes Levy’s fragile psyche and skewers family and friends with gleeful abandon. But Levy goes even further, literally revealing himself in a dream-sequence pickle shot that raises the stakes for self-disclosure.

With the production of a new film as the story’s binding thread, Levy takes us through several breakdowns — his marriage, his nerves, his work — via alter ego Alfi Seliger, played by the director himself. A has-been director whose film “Your Blue Miracle” was the hit of 1995, Seliger’s now flogging a disastrous-sounding screenplay — inspired by the Danish cartoon controversy — called “Moha-ha-med.” Colleagues dismiss him, his kids ignore him, and his voiceover-artist wife’s cheating on him with her boss; even worse, his bank’s tanking and he may have a fatal illness. Major Existential Crisis ensues.

Like “Stardust Memories,” “Life Is Too Long” eschews conventional narrative for a series of surreal set-pieces which may or may not be taking place in Seliger’s mind. As in his previous films, Levy displays a keen eye for farce; Seliger’s medical exam may be the funniest colonoscopy you’ll ever watch, and a suicide attempt becomes more embarrassing than tragic. In a Charlie Kaufman-esque flourish, Seliger also confronts Levy himself, raging against his creator and insisting to anyone who’ll listen that they’re all characters in a movie (“Jewish paranoia,” notes a doctor. “I’m familiar with it”).

Levy rose to prominence with the sentimental 2004 comedy “Go for Zucker,” which the Forward deemed “the first film about Jews in postwar Germany that isn’t about the Holocaust.” His controversial 2007 followup, “My Fuehrer: The Truly Truest Truth About Adolf Hitler,” depicted the mastermind of the Final Solution “as wetting his bed and barking like a dog.” Compared to those films, “Life Is Too Long” consigns Jewish identity to the margins. But it bristles and stings much more. You may not love Alfi Seliger, but you most certainly feel his pain.