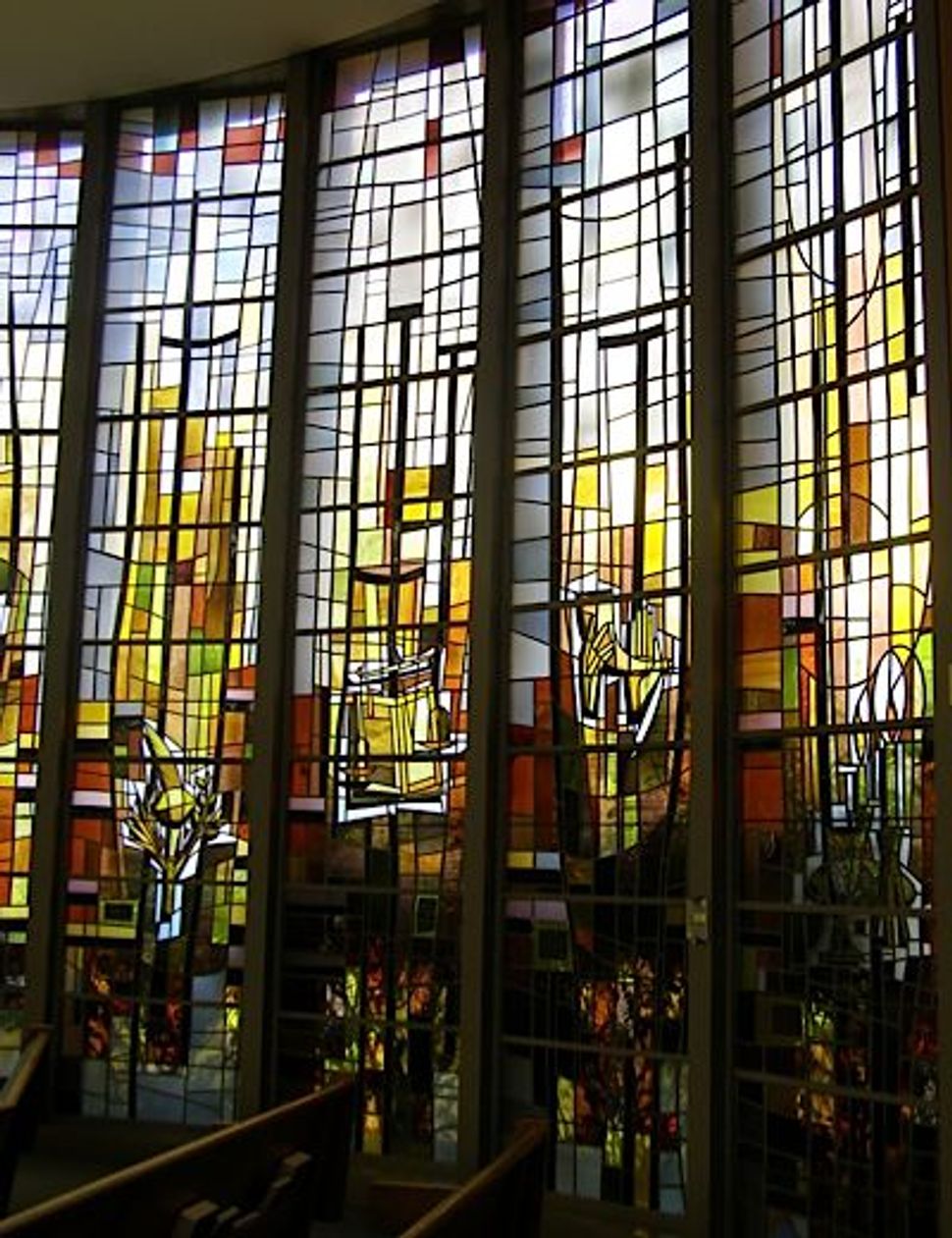 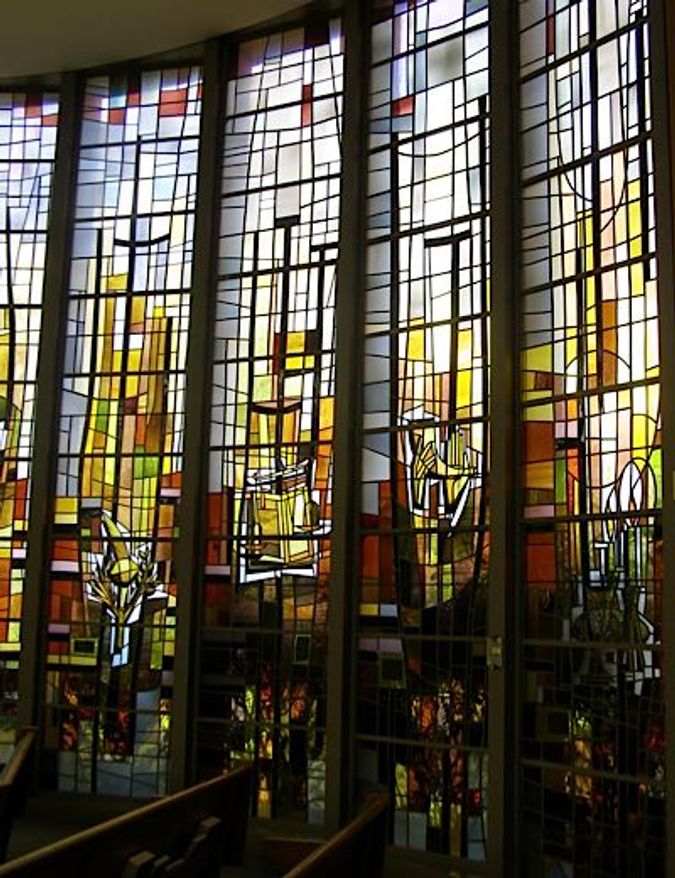 In 2009 I wrote an article for Tablet Magazine about Abstract Expressionist artist Adolph Gottlieb’s stained glass windows in the Kingsway Jewish Center in Brooklyn (this article has just been republished, without slide show, in a special Shavuot synagogue issue of The New York Jewish Week). I was already long interested in synagogue stained glass, but Gottlieb’s work made me more attentive to the innovative techniques, colors and symbols employed by synagogue stained glass artists in the 1950s and 1960s, the heyday of American abstract art. Gottlieb was able to successfully transform the traditional Jewish use of a limited number of religious and cultural symbols to a larger abstract artistic aesthetic. Gottlieb’s program also suggested a nearly-attainable grasp of archetypal highly charged symbols of both personal and cosmic significance, in the tradition of Jewish mysticism.

I was therefore delighted when visiting Connecticut earlier this spring to encounter two exemplary stained glass programs by artist Jean-Jacques Duval (b. 1930) in synagogues I was visiting for their architecture. Both Congregation Mishkan Israel in Hamden and Congregation B’nai Jacob in Woodbridge were designed by Fritz Nathan and Bertram Bassuk (1918-1996), and both include chapels with stained glass by Duval, and Duval did the sanctuary work at B’nai Jacob, too. According to Duval, who remains active as an artist today with more 450 major commissions completed, he and fellow artist Robert Pinart were brought in by the architects for Mishkan Israel.

These synagogues were truly international efforts. Nathan (1891-1960) had been a prominent modernist in Germany before World War II and arrived in the United States as a refugee in 1940. Duval was born in Strasbourg, France in 1930. After the War he studied at Ecole des Arts Decoratif in Strasbourg, and then in 1950, he accepted an offer to design stained glass in United States. In 1957 he opened his own studio in New York City. Pinart was born in Paris in 1926 and came to America in 1951. Both Duval and Pinart have achieved great success in their long careers. Today Duval lives and maintains Duval Design Studio in the Adirondack Mountians near Saranac, N.Y.

Pinart made windows for the Mishkan Israel sanctuary, and Duval for the chapel. According to Mishkan Israel Rabbi Herbert Brockman, his predecessor Rabbi Robert E. Goldburg disagreed with architect Nathan over the ark design, and brought in artist Ben Shahn to create a more monumental arrangement (flanked by Pinart’s ark-wall windows). When the nearby Conservative Congregation B’nai Jacob adapted the recent Mishkan Israel design for their new suburban synagogue, Duval was engaged for all the stained glass work.

One of Duval’s windows at Mishkan Israel has a similar feel to Gottlieb’s — and it immediately drew my attention. But Duval’s fractured symbols are much more recognizable than Gottlieb’s, (more akin to those Robert Motherwell used in his painted panel in Millburn, New Jersey), and firmly within the Jewish symbolic “canon.” One reads the long strip window on one side of the Mishkan Israel chapel as a unrolled scroll, with each “sheet” illustrated by one symbol. There are tablets, a book, kiddish cups, etc. and a domed form that may be a tent, or a priest’s hat, or something else (in fact, it look remarkably like the Beth Shalom synagogue designed by Percival Goodman in Miami).

Duval’s greatest success, however, in both chapels, was his ability to create full walls of stained glass that actually helped emphasize and strengthen the shape of the space instead of distracting from it. Duval has demonstrated this talent for making architectural walls that complement the architecture design in many synagogue and church commissions. Most of his stained glass windows are not to be seen through, or even to be looked at as pictures. Rather, they enclose the viewer to create a container of worship space. Betram Bassuk, writing of Duval in Faith & Form, The Interfaith The Journal on Religion, Art and Architecture, said, “I regard his empathy toward the architectural enclosure of which his work is to be an integral part, to be as fundamental a factor in his creative imagination as is his composing of its symbolic content.”

At Mishkan Israel duval created a mosaic like affect of colored glass panels, roughly rectangular in shape, out of which appear across the entire composition — but only a certain angles — large nine-branched menorahs. A similar effect is achieved over the Ark in the main sanctuary at Congregation B’nai Jacob, though there the form of the seven-branch Temple Menorah is used. in the B’nai Jacob Chapel the use of symbols is more overt and I think, therefore, less successful artistically.

Jean-Jacques Duval has provided me with a list of the synagogues for which he and his studio designed stained glass. Both Duval and I encourage readers familiar with these windows — or those who wish to discover them — to send us photos of heir current descriptions. In some cases synagogues have moved and buildings have been sold, and the fate of the Duval stained glass windows is unknown.