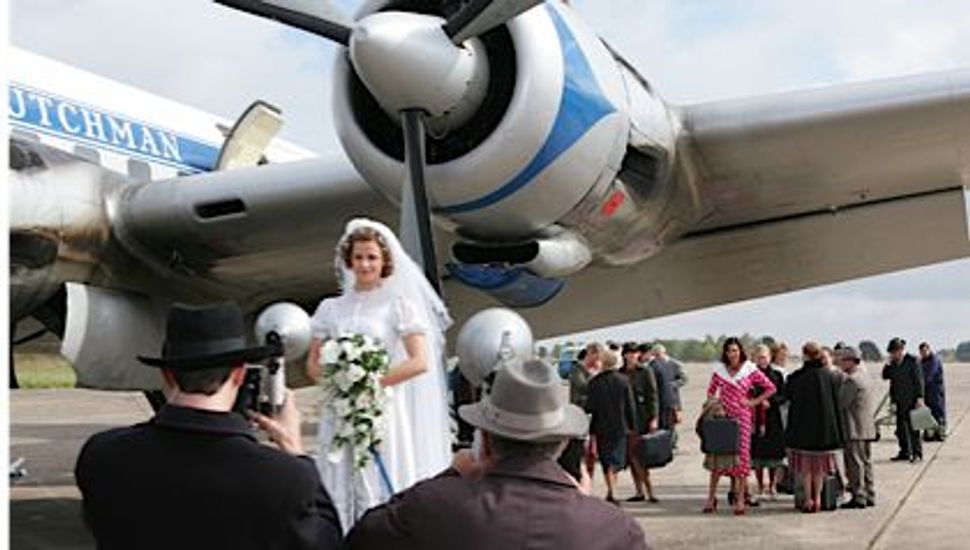 Reputed to be the most expensive Dutch-language film ever made, “Bride Flight,” a sensual melodrama with something of a Jewish theme thrown in, debuts commercially in the United States on June 10.

The film recounts the experiences of four Dutch expatriates who meet on a KLM airliner in 1953, wending their way to New Zealand on a flight that wins a trans-continental race with several other airlines. Over the ensuing 50 years, these passengers’ lives continue to intersect in unexpected ways.

Three of them are young brides planning to settle in their new country with proper Dutch husbands. The fourth is Frank, who is immigrating to New Zealand to become a wine maker. The actor who plays him as a young man, Waldemar Torenstra, is physically reminiscent of the 1950s movie icon James Dean, but even better looking (in old age the character is portrayed by Rutger Hauer). As you might imagine, Frank gets romantically entangled with no fewer than two of the women.

It turns out that one of these women, (the one with dark features, of course) is Jewish. Esther, played by Anna Drijver, is her family’s sole survivor of the Holocaust. As a result, she is profoundly conflicted about her Jewish identity.

Given the chance to settle down with a rather colorless Dutch Jew who insists on maintaining a religiously observant and fervently Jewish home, she angrily objects. Instead, she invests her energy in working her way up from a seamstress to become a highly successful designer of women’s clothes. Not even the fact that she becomes pregnant after a brief encounter with Frank deters her from this all-consuming ambition.

Later, Esther tries desperately to maintain a connection with her biological son, whom she had given up to be raised by one of the other women. And it’s through her Jewishness that she attempts, rather pathetically, to reach out to him.

Esther’s story is an important subplot, but the dramatic center of the film is the enduring passion between Frank and Ada, whom he sat next to on the plane, when she was already married to a stern Dutch Calvinist.

Esther is a beauty, albeit hard-boiled. Not surprisingly, the sweet, wide-eyed blond Ada (Karina Smulders) wins our hearts. Both suffer decades of longing and loss, but “Bride Flight” is more of a romantic epic, which ties up loose ends, than a tale of woe.

Watch the trailer for ‘Bride Flight’: