Using Videos, Jerusalem’s Arabs and Jews To Shoot the Inside Scoop 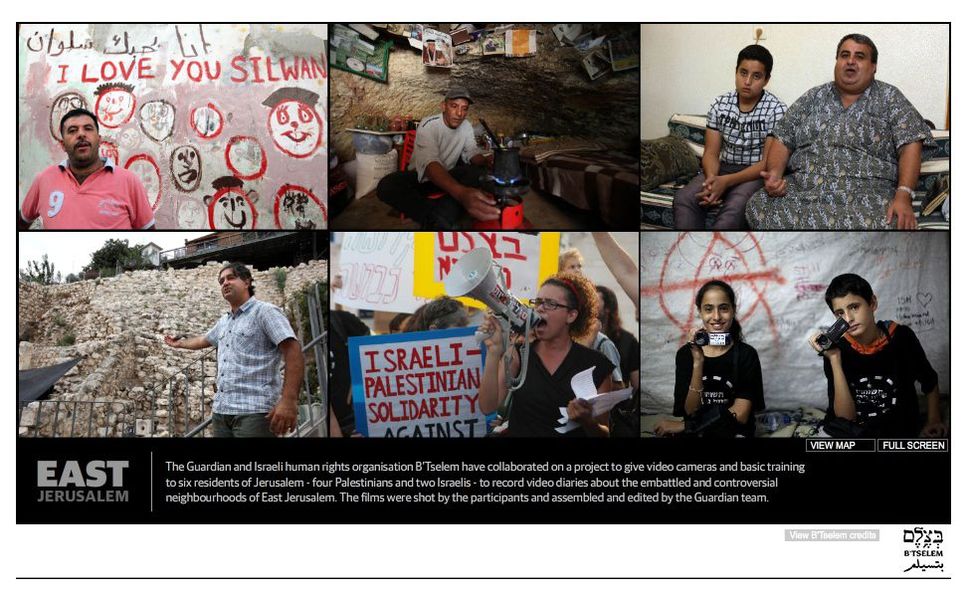 As intractable as the Palestinian-Israeli conflict is in general, it is at its most contentious and high profile in the East Jerusalem neighborhoods of Silwan and Sheikh Jarrah, where small enclaves of diehard religious Jewish settlers live in overwhelmingly Palestinian neighborhoods.

Last week, “60 Minutes” aired a report on the tensions between the developers of the City of David archaeological site just outside the southeast corner of the Old City walls (the developers also fund the expenses of Jewish settlers) and the Palestinian residents of Silwan, which is the area’s Arabic name.

But “60 Minutes” could provide only the perspective of an American journalist looking in on the situation. Now, the British newspaper the Guardian, in partnership with B’Tselem, has provided us with a different viewpoint — that of everyday Palestinians living in the contested area.

B’Tselem — The Israeli Information Center for Human Rights in the Occupied Territories — provided cameras and basic filmmaking training to six people (four Palestinians from East Jerusalem and two Jews from West Jerusalem) who could get the inside view on potentially the most explosive point on the Israeli map.

Zuheir put up six CCTV cameras around his house to document IDF and Israeli police activity in the streets of Silwan, following the fatal shooting by Israeli forces of a local resident. His self-made video documents how the Israeli government confiscated his camera and computer equipment.

Abd al-Fatah is a simple farmer caught up in bureaucratic red tape in an attempt to save the shack and basic farming structures he has set up illegally. He documents his trips into Jerusalem to appear in court and says into the camera that he is too attached to the land where he grew up to move into a West Bank refugee camp to be with his family.

Yoni, an archeologist, and Sara, a political activist, are left-wing Israelis who document their (admittedly) perhaps futile respective attempts to counter the mainstream public relations line on the City of David and to protest evictions of Palestinians from homes in Sheik Jarrah.

Most moving among the videos are two that were made by Palestinian children who document from their perspective their uncomfortable lives among Jewish settlers. The videos — obviously filmed at a child’s eye height — are not at all childlike, and therein lies their power.

This is not the first time B’Tselem has enabled regular Palestinians to produce these kinds of videos. In early 2010, the organization gave journalism and communications students in Gaza cameras and basic instruction so that they could shed light on the life of children and teens there one year after Operation Cast Lead. The most powerful among those short films was one called “Tunnel Youth” about boys who lived in and smuggled materials through the illicit underground passageways linking Gaza and Egypt.

There is no need to even argue the point that B’Tselem and the Guardian’s left leaning agenda comes through clearly in these films, because it can’t be denied. But that should not stop anyone from watching them, because they do the courageous and necessary work of showing how an insider sees a place so covered by outsiders.

Watch the Guardian and B’Tselem videos.

Using Videos, Jerusalem’s Arabs and Jews To Shoot the Inside Scoop