For ‘Royal Pains’ Star Mark Feuerstein, the Next Best Thing to Being a Doctor Is Playing One on TV 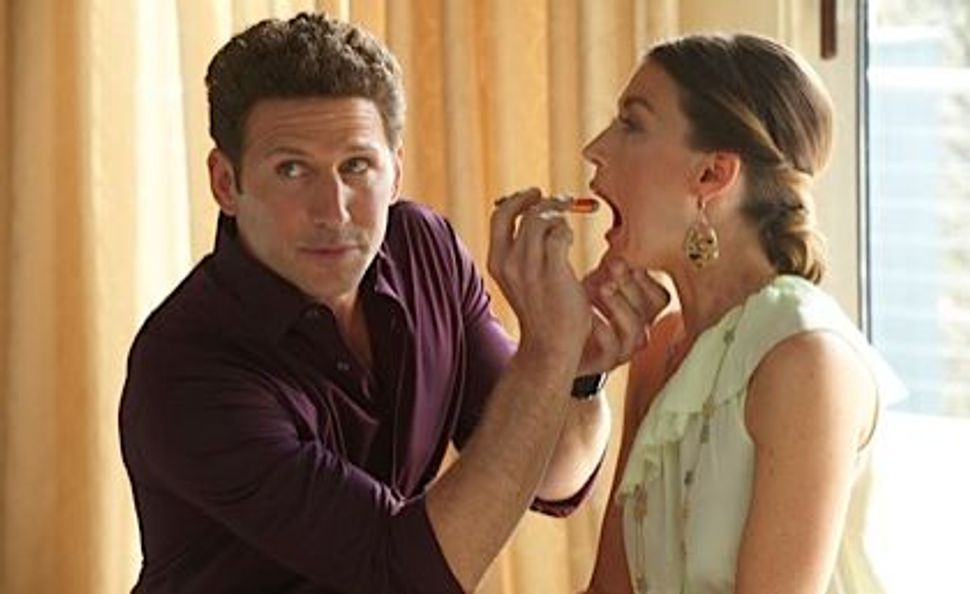 Mark Feuerstein did something he knew would thrill his, and every other, Jewish mother. Though lacking any aptitude for biology, Feuerstein became a doctor.

“The only way I could find a way to a respectable profession was to come to an unrespectable one,” he said.

By “unrespectable” he means, of course, acting. He was Dr. Steven Levine on “Guiding Light” in 1997. A few years ago, Feuerstein starred as a neurosurgeon on a short-lived series, “3 Lbs.” More famously and happily, he appears as Hank Lawson, concierge doctor, on “Royal Pains,” the number one series broadcast by the USA cable network, which begins its third season June 29.

Feuerstein has played a number of roles over the course of his career: Eddie Sullivan, the shady wrestling promoter in the film “Knucklehead”; Joe DeStefano in eight episodes of “Caroline in the City”; and Clifford Calley, “a Republican of all things,” in “The West Wing.”

But it all keeps coming back to the Jewish doctor thing. “There’s something about me,” he joked. “Perhaps it’s the way I talk, my proboscis, the thickness of my hair, the swarthy quality of my skin. But something has led people to believe I’d be convincing as a doctor. Maybe it has something to do with the preponderance of Semites in my profession.”

Feurerstein was on the phone from Brooklyn, on his way to a local coffee shop during a break from filming. It was a journey interrupted by admirers who wanted to have their photo taken with the Hamptons physician.

Hank Lawson was a respected emergency room doctor in New York City, when he treated an indigent patient in serious condition before treating a large contributor to the hospital’s coffers. Unfortunately, rich guy died and Lawson is canned and blackballed. His brother, Evan (Paulo Costanzo), convinces Hank to get away from it all at the fabled Hamptons beach resort.

While there, he saves a woman’s life, impressing an uber-rich resident who invites him to stay at his chateau and become a concierge doctor for him and the Hamptons elite (though he continues to treat those who can’t afford to pay).

It is the latest role in what has been a successful career that includes movies (“What Women Want,” “Practical Magic,” “Defiance”), guest spots on TV series (“Law & Order,” “The Closer,” “Sex and the City”) as well as series of his own (“Fired Up,” “Conrad Bloom” and “Good Morning, Miami”).

Feuerstein likes the words “successful career” — a conclusion not everyone reaches. “It’s amazing how some reporters see reality differently,” he said, referring to some who put a negative spin on the quick cancellation of a couple of his shows. He’s been called “sitcom kryptonite.”

“I prefer your reality about some shows that didn’t work as well as they might — a nice, positive optimistic approach,” he told me. “Yes, I have been very lucky to work consistently.”

That isn’t the only beef he has with some reporters. “They’ll take an actor who is open and willing to communicate about their lives and then turn around and stab them in the back and make snide comments.” One in particular made him seem self-involved, much to the consternation of his dad. “My father said, ‘Mark, you said you were Mr. High School? Who are you to think you are Mr. High School?’”

“It was my father’s way of letting me know in a beautiful way — as he’s done in synagogue — that we are just this big in the universe.”

Feuerstein clearly is not just an I’m-being-interviewed-by-the-Forward Jew. Growing up in New York City, he attended services regularly with his dad — at least until sports interfered. He talks with authority about the synagogue he attended (Park East), the one his brother goes to now (Park Avenue) and the one he and his wife, Dana Klein, and their three children attend in Los Angeles (Ikar).

He speaks knowledgeably about Torah readings and even spells the names of his rabbis correctly (respectively, Schneier, Cosgrove and Brous).

Like a good Jewish boy, he was headed for a professional job. He was going to be a lawyer like his father. After graduating from Dalton, he attended Princeton on a pre-law track when he decided to audition for a campus production of “Burn This.”

The audition was terrible. He read a sensitive part as though he was Andrew Dice Clay, and did not get the role. But an assistant director felt he had talent and cast him in subsequent productions. Feuerstein wound up with a Fulbright scholarship to study acting in England and France. He’s worked regularly since, and is expanding his range. This year he’s directing an episode of “Royal Pains,” writing a screenplay, and working on an idea for a series.

Not bad for kryptonite.

For ‘Royal Pains’ Star Mark Feuerstein, the Next Best Thing to Being a Doctor Is Playing One on TV