Whatever You Think About ‘Go the F**k to Sleep,’ Leave the Jews Out of It 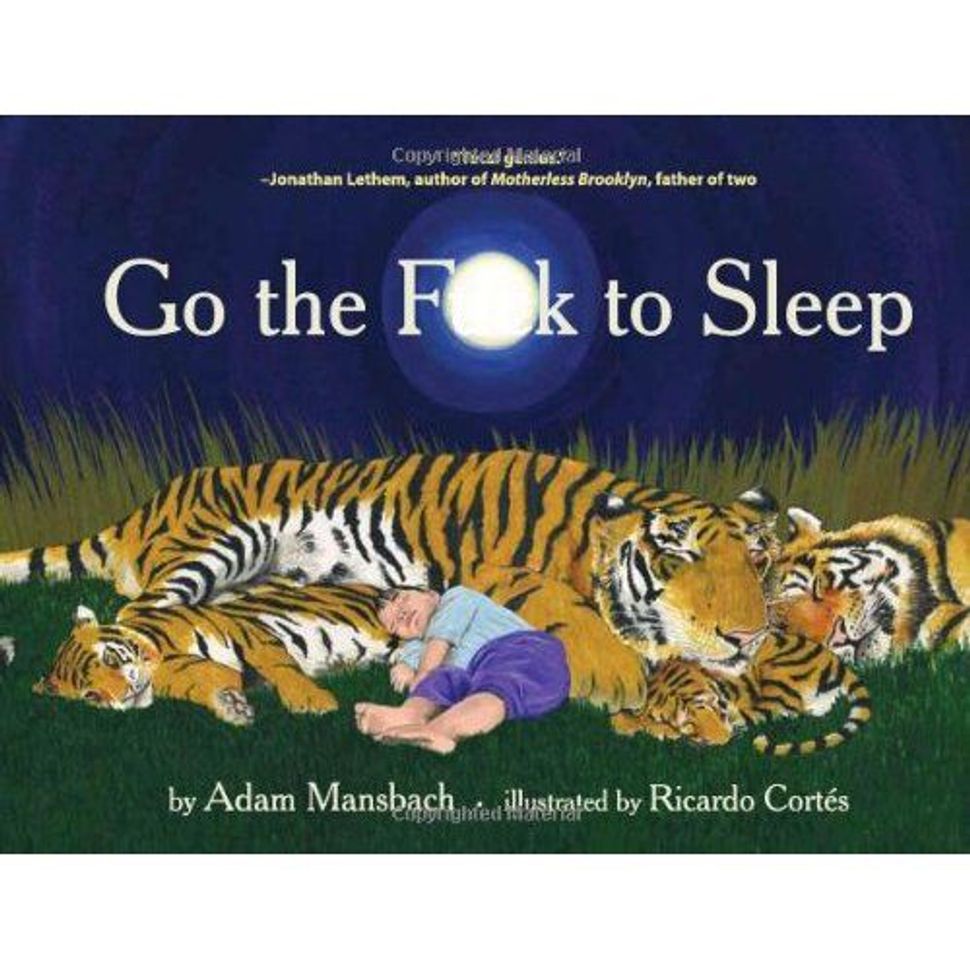 Now — following coverage of the pages leaked pre-publication, the book’s actual launch and the subsequent release of the audio version by Samuel L. Jackson — comes a flurry of commentary and analysis.

Late last week, we were treated to Deborah Kolben’s takedown of Katie Roiphe’s essay on the book for Slate. Kolben, editor of the Jewish parenting website Kveller.com, took aim at Roiphe’s assertion that the real takeaway from the book is that parents today devote themselves too much to their children, denying their need for adult time and activities together, including — yes — lots more sex. “But if those sweet-faced children, so gorgeously drawn by Ricardo Cortés, could talk back would they say: ‘Put on a fucking dress. Have a fucking drink. Stop hovering over us. Live your own goddamned life,’” Roiphe wrote.

Kolben, in response, told Roiphe to get off her life-of-privilege high horse. She said that Mansbach reflects the feelings of many new parents who must work all day and who feel conflicted about not spending as much time with their children as they’d like. Making our parenthood the center of our lives is just fine, Kolben says, as is an exhausted couple flopping down on the couch to watch TV together. She writes:

So, yes. Go the F to Sleep is really funny because it expresses that drudgery and frustration of parenthood — that very thing that is supposed to be so precious and beautiful, but is also filled with snot and poop and crushing fear. … Parenthood is really hard. But as with most things that are difficult, it’s also pretty awesome and rewarding. And it’s so much better when you can commiserate.

Then, yesterday, the online community rose up almost in unison to tell CNN columnist Karen Spears Zacharias to get a sense of humor. Zacharias basically accused the author of “Go the F**k to Sleep,” which has risen meteorically to the number one spot on Amazon and is a New York Times best seller, of being grossly insensitive to the fact that in real life, many children are subject to violent language from their parents and other adults. It’s not a laughing matter, according to Zacharias. Comments began pouring into CNN’s website pointing out to the columnist that the book is not meant to be read aloud to kids. It’s an adults-only gag book best kept on the hard-to-reach bookshelves with the other material not appropriate for children. Come on: Has Zacharias never seen a picture book for adults before?

Over at Gawker, Maureen O’Connor tackled Zacharias’s reference to comments by a development expert named Dr. David Arredondo. “‘Imagine if this were written about Jews, blacks, Muslims or Latinos,’” Arredondo said. “It is hard to imagine this kind of humor being tolerated by any of the marginalized groups Arredondo cited,” Zacharias added.

O’Connor, on the other hand, thinks Zacharias and Arredondo are out of line. Since when do we equate little children with grown-up Jews? O’Connor offers this rebuttal:

Noooo, not the ‘Imagine if you said this about the Jews’ trap! This is a false equivalency. Children are not a race or religion, they are just small people with weak bladder control and minimal literacy. Swapping ‘Jew’ into random sentences about children doesn’t mean the aforementioned sentence is offensive. It means that one does not speak to a Jewish adult the way one speaks to a child.

It’s not clear yet when the debate over this provocative picture book will be put to bed. But it seems we can rest assured that whatever the different takes on it, for some people it’s still — as always — about the Jews.

Whatever You Think About ‘Go the F**k to Sleep,’ Leave the Jews Out of It