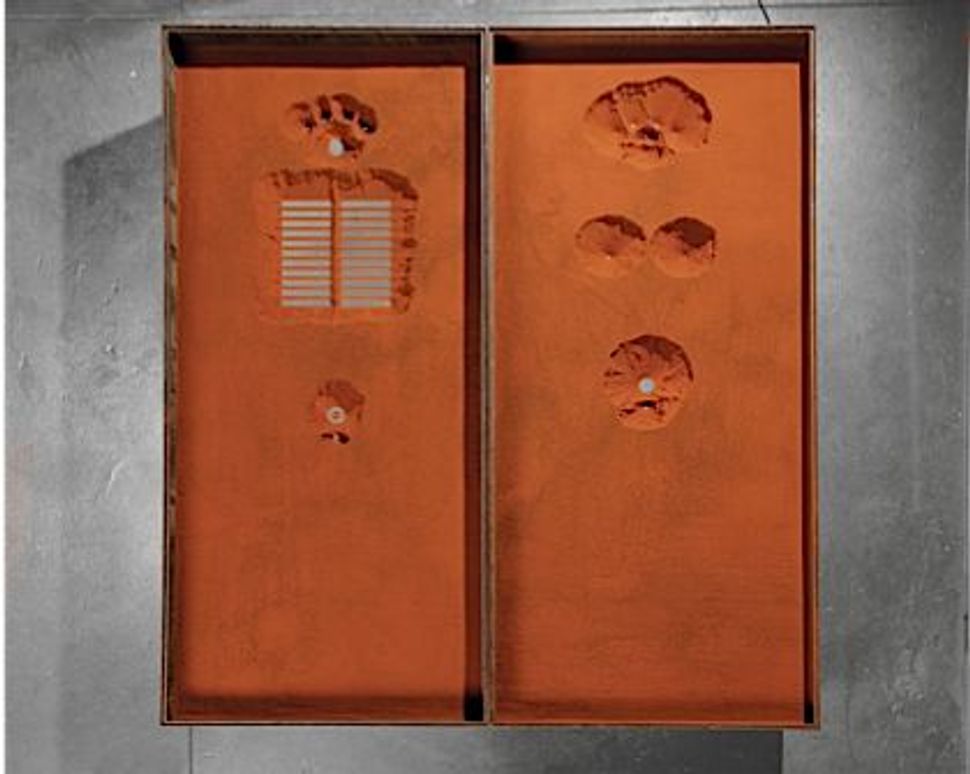 Despite an almost clinical spareness immediately evident at The Israel Museum’s new Micha Ullman exhibition, one quickly comes to appreciate that the works — individually and as a whole — hint at something more than the stark minimalism they first suggest. Chairs appear consumed by the solid ground; plain display boxes contain red earth, coaxed into abstract yet recognizable forms. There is something of the primeval about the exhibit, a sense of complexity stripped to its most basic elements.

“Sands of Time: The Work of Micha Ullman” is, perhaps surprisingly, the first major retrospective of the artist’s extensive output, spanning the better part of half a century and incorporating sculpture, drawing, etching and installations. The exhibit, running until November 12, is divided into four sections: sculpture, sand, drawings and videos of installations. The main room is dominated by iron sculptures and creations in sand; one might think of the solidity of the one and the fluidity of the other as a study in contrasts. Rather, what surprises is the compatibility between the two.

At a press preview that took place the morning after a lunar eclipse cast the full moon over Jerusalem in a rich red hue, Ullman, who won the Israel Prize for Sculpture in 2009, explained that his work is preoccupied with contrasts, and with establishing harmony between competing forces.

Natural processes permeate his work. “Fish Sandtable” (1999) and “Who, What” (2009) both incorporate the effect of gravity on sand formations. The connection to nature runs, in different ways, through Ullman’s career; his first major work, “Messer/Metzer” (1972) — a symbolic exchange of earth between a Jewish kibbutz and an Arab village — reduces political complexity to a simple, universal statement: We are all of the same earth.

Many of the pieces in the exhibit explore the space that exists between contradictions and, somewhat paradoxically, the “presence” of absence. His most noted work, the underground “Bibliotek” memorial in Berlin (represented in the exhibition by a video), is located at the spot where the Nazi Party burned 20,000 volumes by “degenerate” writers. A small window in the ground looks into a subterranean library, empty shelves representing the books destroyed by enemies of culture and co-existence. A plaque bears a prophetic quote by Heinrich Heine: “Where books are burned in the end people will burn.”

Also included in the exhibit is a site specific installation, the 200-square-meter “Wedding,” created at the museum with the help of 100 volunteers who participated in the eponymous, fictitious wedding. Using his signature sand scattering technique, Ullman captures the event complete with chupa, tables, chairs and guests, frozen in time. The sense of absence/presence creates a ghostly juxtaposition and a comment on the transience-yet-permanence of the event thus captured. As James Snyder, Director of The Israel Museum comments: “‘Wedding,’ along with the rest of the works on display, illustrates the dualities that infuse the artist’s works, simultaneously conveying a sense of the intangible and celestial, as well as the tactile and earthbound.”