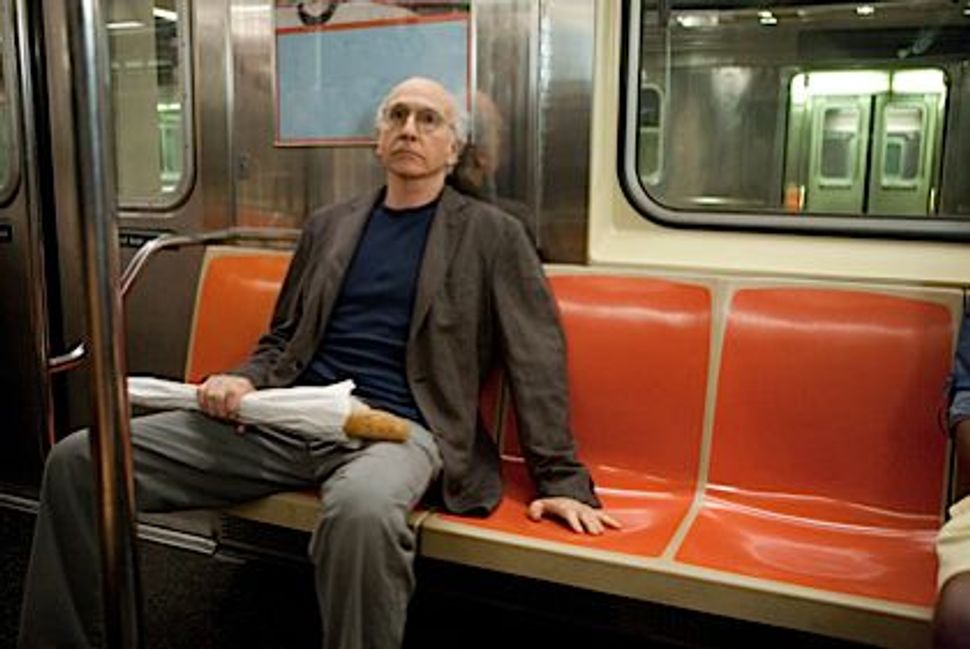 Larry David is a clown. Or the last schlemiel who found a way to make Jews the uncomfortable outsiders again. Or a man whose “imbricated” sense of humor “challenges essentialist categories of comic performance,” as well as the tenets of Judaism and Christianity. (By the way, I agree with that take.) And the series’ new season again finds the character Larry David (played by Larry David) as the unlikely vehicle for pursuing moral questions, such as, “Is it ever appropriate for a man to help a young girl getting her period for the first time?” Or, “Is it ever acceptable to hire a gentile attorney?”

But the eighth season premiere, “The Divorce,” which aired July 10 on HBO, highlights what many fans have known all along: The show works because of the richness of its secondary characters. While these characters, from Larry’s manager Jeff (Jeff Garlin) to the environmentalist do-gooder Ted Danson (Ted Danson), have individually received praise for their performances over the years, the series itself is remarkable for the sheer number of memorable figures and standout cameos its creative staff has devised. No character given the power of speech on “Curb” ever wastes that speech. An Asian-American cleaning woman doesn’t just get to shoo Larry away from her boss’s front door — she’s given the opportunity to dismantle both his logical reasoning and his class-blind understanding of contemporary society.

What started as a show about one man’s struggle to find post-success success has evolved into something much larger. “Curb” is not an ensemble piece; it’s still Larry’s show, and the action still centers on Larry’s quixotic adventures. We never leave his perspective for more than a moment and it would be disorienting to watch an episode that focuses on Jeff or even Cheryl (Cheryl Hines), Larry’s ex-wife. Instead, the creative staff of “Curb Your Enthusiasm” have turned Larry into a guide to one of the strongest fictional universes in television — or even literary — history. Larry’s Los Angeles is the comedic version of Baltimore in “The Wire” or even a televisual equivalent of Faulkner’s Yoknapatawpha County: a discrete geographic universe filled with a rich human tapestry and a well-developed sense of history.

Unlike these other universes, Larry’s Los Angeles (and, in the new season, New York) is defiantly Jewish. The sex offender who moves into the neighborhood is likely to be a Jew in need of a Seder; the flirtatious dry cleaner will turn out to be Hasidic; and, as we saw in the latest episode, even non-Jewish lawyers call you a “macher,” wish you “mazel tov” on your birthday, and have mezuzot on their doors. In a classic moment, Larry briefly has to pretend to be a gentile in order to become a member of a country club. He wears a navy blazer with gold buttons, blue shirt and red tie, and claims to drive a hummer because he’s not concerned about global warming. “People like it a little warmer, don’t they?” Larry ironically muses. The absurdity of his costume and the performance of passing shows that in “Curb,” it is WASP, and not Jewish identity that is marked as impossibly foreign and strange.

The appearance of Jerry Seinfeld during the series’ seventh season briefly threatened to re-make “Curb” as an ensemble piece. Jerry Seinfeld’s “Jerry Seinfeld” — a more caustic version of “Jerry Seinfeld” from “Seinfeld” — proved to be too-good of a foil for Larry. We could imagine the show leaving Larry’s perspective to focus on Seinfeld’s exploits. But “Curb” kept us centered on Larry by highlighting the Larry-ness of “Seinfeld.” Larry tried to step in for Jason Alexander and play George Costanza, with predictably disastrous results. Instead of Jerry usurping Larry’s show, Larry visually re-asserted his creative presence on Jerry’s show. In the end, while the TV audience in Larry’s Los Angeles got to see a “Seinfeld” reunion show, we got to see something arguably better: a master comedian riffing on the process of creating art, whose greatest skill is finding the humor in everyone surrounding him.

Watch a behind-the-scenes featurette for ‘Curb Your Enthusiasm, Season 8’: