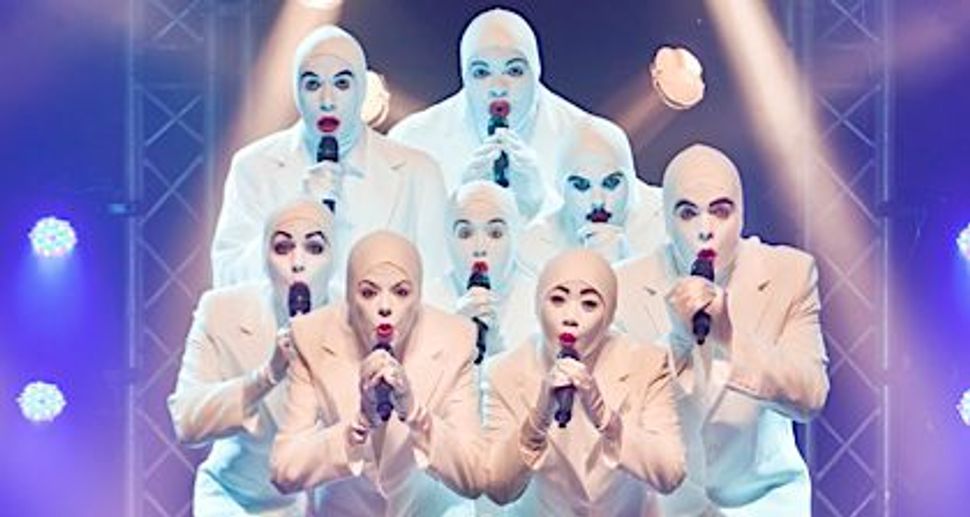 A crash is heard at the Westside Theatre. Something unidentified, something flying, lands with a thud on the stage, and from the wreckage emerge eight figures. Bright white from head to toe except for ruby red lips, these creatures are from the planet Voca, a strange and exotic land where “life is music and music is life.”

Created and directed by Lior Kalfo (writer and star of Israel’s popular TV series, “The Comedy Store”), the a capella musical “Voca People” opened July 12 off-Broadway. Since 2009, the YouTube sensation with over 20 million hits has played sold-out tours throughout Europe, South America, the Middle East and the far reaches of the Milky Way.

The octet consists of three women and five men spanning all six major voice parts, with two more known as “Captain Beat On” and “Scratcher” taking care of rhythm through beat-boxing and amazingly bizarre vocalizations. Together, they perform tightly sung, clever, and fantastically fun a capella medleys of some of earth’s most beloved tunes. Paired with delightful choreography and, of course, audience participation, this whitewashed ensemble is truly out-of-this-world (pun very much intended).

Kalfo and arranger/composer Shai Fishman have managed to create tourist fodder that can also captivate the savvy New Yorker. Even in a nation inundated by televised singing competitions, pop superstars, and high caliber musical theater performers, there is something truly unique and awe-inspiring about these top-notch, high-energy vocalists. YouTube doesn’t do them justice.

Credit must go to the singers themselves, notably Tiago Grade as the aforementioned Scratcher, the emcee and chief translator between the Vocas and us earthlings; Laura Dadap as the pint-sized Alta, whose small frame belies her tough-girl attitude, and Mercer Boffey as the skillful Captain Beat On.

The Vocas are hoping to refuel their ship, they tell us, and to do so they must use the energy from our music. Through Gregorian chants, Top 40 hits, heavy metal, and an incredible classical mash-up, the lyrical, hysterical, and fun-loving extraterrestrials can’t help but impart a bit of their other-worldly energy to us mere mortals.

Watch a preview for ‘Voca People’: