Amid Polish Anti-Semitism, a Magical Australia of the Mind 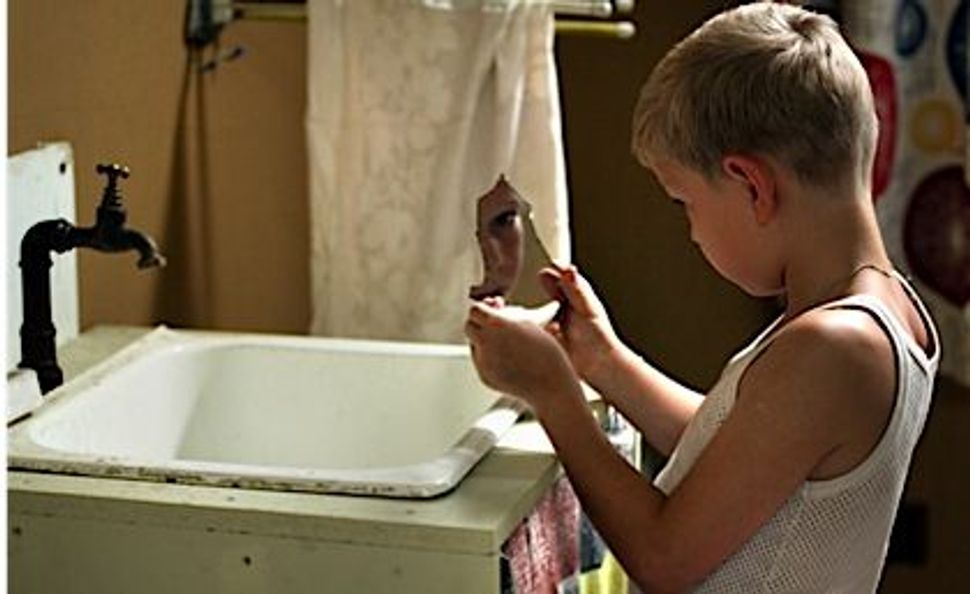 The upper floor of an apartment building hides a secret world tied to a rope, waiting to be animated by the voice and imagination of a boy, Tadek (Jakub Wróblewski). Yet soon after he pulls that world — a model of Australia — out of its niche, a whistle calls him to join his older brother Andrzej (Lukasz Sikora) and the neighborhood gang to beat up Jews. Although the animals in Tadek’s Australia are also busy beating up on one another, there is a childlike innocence to the opening scene, soon shattered by the brutal violence that follows.

“My Australia” by director Ami Drozd, which premiered July 12 at the Jerusalem International Film Festival where it won the Van Leer Group Foundation Audience Choice Award, is a powerful and immensely appealing film that not only engages with difficult topics — Polish anti-Semitism, neo-Nazism, and Jews who hid their origins in postwar Poland — but also gives voice to characters not usually heard in Israeli cultural discourse.

Living in a poor neighborhood in Poland in the 1960s, Tadek is torn between worlds: childhood and adolescence; a creative inner emotional life and the external world of harsh necessity; Pole and Jew. Tadek is street-smart and achingly sensitive, creative, determined, cheerful and mercurial. The film follows him closely, presenting these conflicts from his perspective of boundless curiosity and intelligence, portraying his efforts to cope with incomplete and often misleading information.

Tadek knows what it takes to survive in his environment. When he and Andrzej are arrested along with the other gang members, he listens in on his mother’s (Aleksandra Popławska) conversation with the police officer, admiring her invention of a war hero husband to get the boys out of trouble. It’s a world where you do whatever has to be done — lie, cheat, steal, fight — and Tadek does it well. Collecting bottles to redeem for cash, he agrees to “trade” his bill for an older boy’s coins, then runs off with all the money. It’s not a pretty picture, but Tadek is so appealing, energetic, joyous and, despite his streetwise actions, innocent, that one cannot help but sympathize with the aspiring hooligan. After coming home from jail, when his mother asks incredulously, “You went to beat up Jews?” Tadek looks up at her and nods, shining with excitement, happily unaware that there might be anything wrong with his actions.

Yet everything that Tadek knows is about to be undermined. His inventive mother, having survived the Holocaust, decided that it would be better to hide her Jewish origins and live as a Catholic. Seeing the outcome of this decision, she decides to change course, yet still tries to smooth the way with a good story. Taking Andrzej into her confidence, she delegates the job of informing Tadek to the 15-year-old.

Once the mother realizes that she needs to get her sons away from their current environment, Tadek’s compliance is enlisted by telling him that the family will be moving to the land of his dreams — Australia. On the boat however, it turns out “there’s a slight change of plans… but it’s exactly like Australia.” Tadek is outraged: “It’s not enough that we’re sort of Jews, now we’re going to live in their country!”

The film explores the concepts of family, home and identity with sensitivity and humor. Tadek’s childlike perspective takes the edge off the movie’s harsher elements, yet these are presented in a simple, direct manner, whether it’s the hostility of Israeli children toward Tadek, or his own beliefs about these “weird people not ashamed to be Jewish.” Once in Israel, Tadek runs headlong into his new life, helping his mother with Hebrew pronunciation and doing everything he can to fit in with the group after his mother sends the boys to live on a kibbutz.

While Tadek desperately wants to be accepted, Andrzej remains resolutely an outsider, and the boys’ stories raise questions of identity, loyalty, and the place of the individual in relation to the group. Drozd explores this important and often neglected chapter in Jewish and Israeli history with sensitivity and a wonderful sense of fun, creating memorable characters and a strong sense of place. When Andrzej tries to tiptoe towards the truth by telling Tadek that their Uncle Felix is a Jew, Tadek’s reaction is immediate and direct: “How did that happen to him? F**k…”

This story is one that has not often been told in Israeli cinema — that of the postwar generation born in Europe, and their relationship to Jewish and Israeli identity. In Tadek’s case, the desire to belong involves literally and symbolically letting go, not only of the past and the outward aspects of a former life, but of the essence, the most private core of his being. What has been a convenient cover story for the mother has serious meaning for her sons; it is their entire world, their life, their identity. Raised as a Catholic Pole, influenced by the norms of an anti-Semitic environment, Tadek’s every thought and emotion comes from that set of beliefs. Yet Tadek’s carefully constructed “Australia” suggests that there was always a desire to be elsewhere, to find refuge in an imaginary world, somewhere far away, different, exotic — a place with the freedom to create, to be different, to be someone other than the Tadek of the streets.

Amid Polish Anti-Semitism, a Magical Australia of the Mind