Monday Music: Do You Know Where the Party’s At? 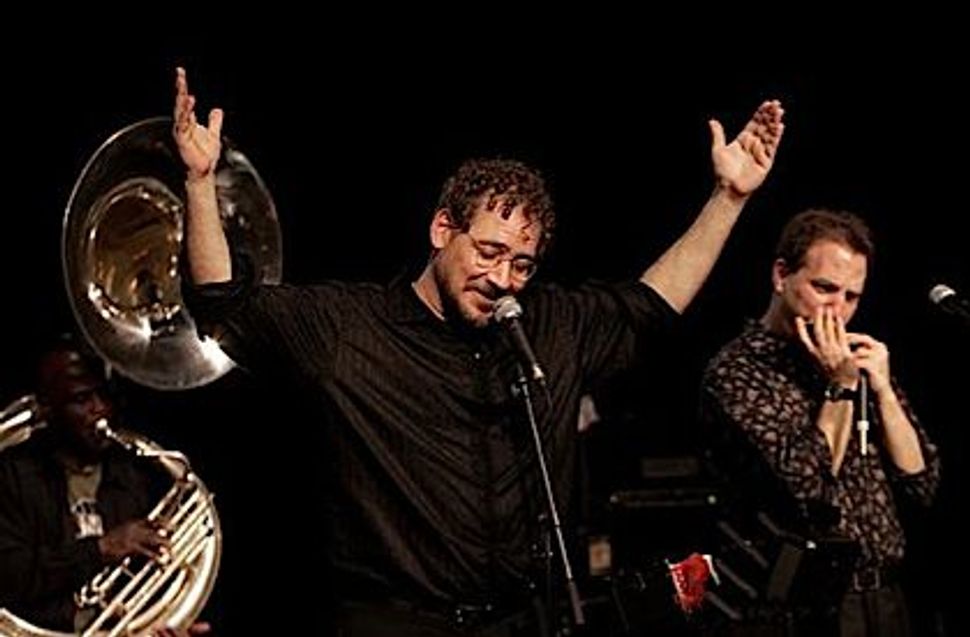 It would not be hard to make a party game of picking out the global influences in the New York-based band Hazmat Modine’s new album, “Cicada.” There’s a Latin groove here; a klezmer-ish flourish there; a hint of Jamaican rocksteady; an intermittent country twang; whole tracks featuring a West African brass band. Music by lesser groups would seem to demand an academic treatment, entreating us to catalogue — and to congratulate the musicians for — each eclectic scrap and esoteric musical reference.

The difference between those bands and this one is that Hazmat Modine’s music really works. This is potent stuff that, rather than stirring that old impulse to dissect and label, produces a tickly feeling behind the solar plexus. The thought isn’t “What is this?” let alone, “Is that balalaika that I hear?” Rather, it’s “Where’s the party?”

Am I gushing? Maybe, but only because it’s so rare to find newfangled, not-quite-this, not-quite-that music that appeals on such a visceral level. Still, for any stubborn musical taxonomists who may be reading this, I’ll acknowledge that the Hazmat Modine approach is deeply rooted in the blues — that versatile platform on which so much great American music rests. If you’re foolish enough to be anti-blues (and you particularly dislike the kind from New Orleans), you won’t like “Cicada,” which features dueling harmonicas, lap steel guitar and regular old electric guitar wailing away in rapturous solos. Perhaps most striking is the simultaneously resonant and raspy voice of band leader Wade Schuman. This man, it seems, was born to sing the blues.

The album’s infectious first track, “Mocking Bird,” begins as a call-and-response work song that evokes the stale heat of the rural American South. A wordless vocal riff in the minor mode, punctuated with handclaps, is sung in unison with a growing collection of instruments (first shamisen, then trombone, tuba and trumpet). This becomes the refrain to answer each line that Schuman sings in an original parable about the mockingbird (“The mockingbird he has his pride, the song he sings: full of lies”). Then the harmonica bursts in and kicks off an energetic, up-tempo blues section: The brass instruments blast that original vocal riff, the harmonicas and guitar noodle around it, and Joe Daley’s tuba bounces nimbly underneath, often playing the quickest notes of the piece.

Part of Hazmat Modine’s genius lies in replacing the everyday bass guitar with the round tones of the tuba, making even the humblest bass lines sound grand — an effect that’s particularly noticeable in the group’s deliciously funky cover of “I’ve Been Lonely for So Long.” And throughout the album, Daley’s tuba and Reut Regev’s trombone have the satisfying effect of making the band sound bigger than it is. So many of the tracks call to mind a couple of unsuspecting folk musicians trading blues songs or harmonica ditties on the street, only to find themselves suddenly backed by an entire marching brass band.

Aside from the album’s title track, a highly unusual (and pseudo-scientific) blues-funk ode to teeming creatures “born in multitude and eaten by many,” my favorite piece on “Cicada” is probably “The Tide.” The first section of the piece, with its rich vocal harmonies and straight-forward blues-rock groove, calls to mind the best of Crosby Stills & Nash (plus brass). After about two minutes, the group abruptly transitions into a more relaxed, syncopated instrumental section that is no doubt a reflection of the Jamaican rocksteady they list as an influence. It’s one of those musical shifts that feels both surprising and inevitable — like the ending to a well-crafted short story, or the momentary sensation of weightlessness that comes from driving too quickly over a bump in the road. I’m not a good dancer, but I’d very much like to find myself caught up in a jostling throng during a live performance of this piece. That change in meter is the kind that would surely make any nightclub crowd pause, whoop, and then resume its collective gyrations with renewed vigor.

Listen to ‘The Tide’:

To suggest that this album is “genre-busting” — a limp cliché — is to understate the sophistication of Hazmat Modine’s project. Their brand of stylistic diversity might be better described as “genre-blind” or even “genre-agnostic,” though I’m not sure either of those quite gets at it, either. These musicians are aware of, and well-versed in, a great number of musical traditions, both domestic and global, and they borrow freely from dozens of them without losing themselves, chameleon-like, in imitation of specific styles. Though there is ample mixing of musical elements, it isn’t mixing for mixing’s sake, but rather a strategy for producing music that does what music is supposed to do: cause us to sing, shout, dance, cry, imagine, reminisce, or some combination of those all at once. With “Cicada” they prove that they’re not too proud to bring in ringers, either, doubling brass forces with the Gangbé Brass Band, from Benin, in West Africa, in “Child of a Blind Man,” and featuring the renowned Kronos Quartet in “Dead Crow.”

Hazmat Modine will perform August 4 in the last of the Summer Nights concerts at the Jewish Museum, and it will be interesting to see whether, for that performance, they choose to emphasize the few recognizably “Jewish” — that is, klezmer-inspired or middle Eastern — sounds that can be heard in their work. They might also talk about the ways in which Jewish musical elements, arguably as important as the African influences that are more regularly acknowledged, have played an essential role in the development of American popular music, jazz, and blues. (The band’s cover of Irving Berlin’s “Walking Stick” sounds like a classic Jewish-American tango, if there is such a thing.) In any case, the best approach is probably to let the music — irresistible, whatever its provenance — speak for itself.

Monday Music: Do You Know Where the Party’s At?