Struggling To Be Gay and Orthodox, Without Hypocrisy 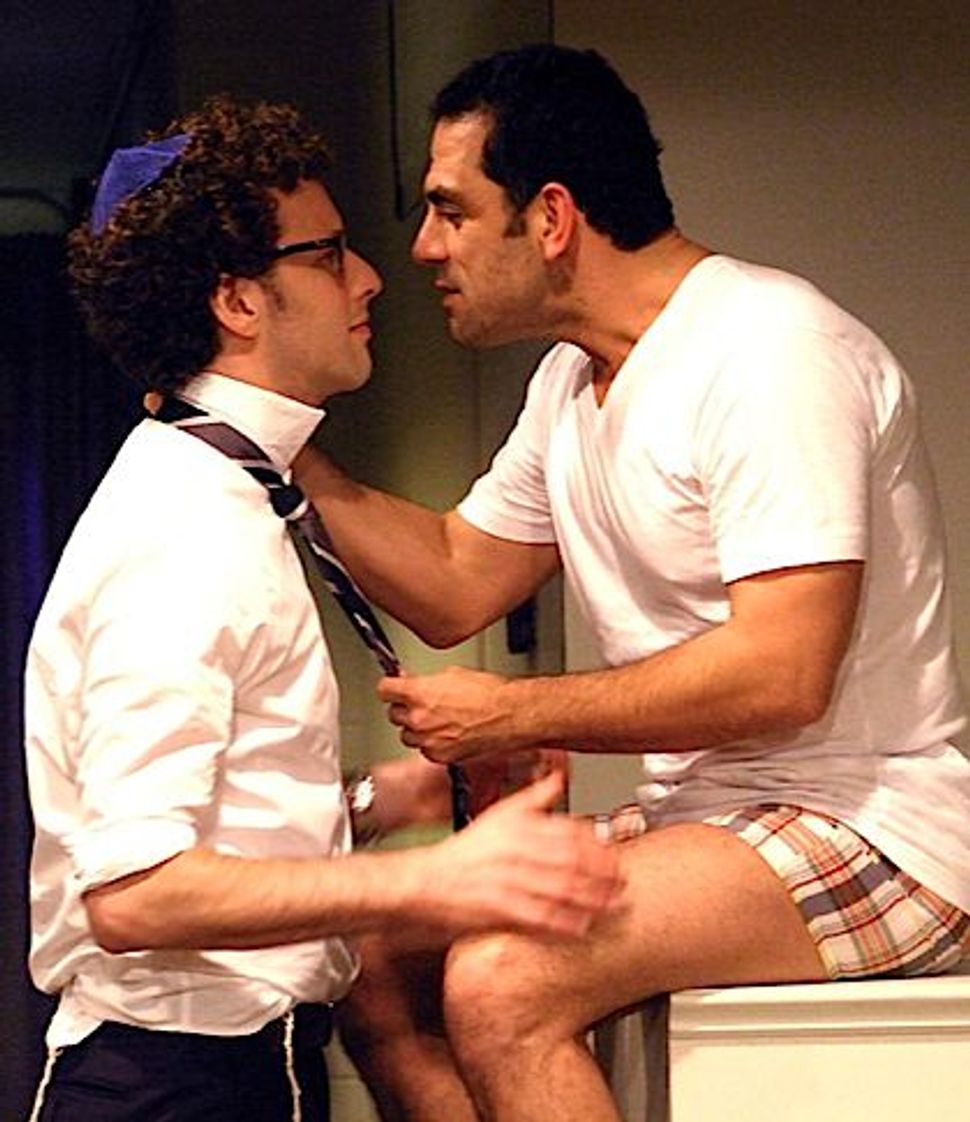 Noah Weisberg and Jonathan Hammond in ?A Strange and Separate People.? Image by Michael Portantiere

One of the first prayers at the start of the Shabbes meal is not the traditional Hamotzi on the bread, but the blessing over the wine. As one of the characters in “A Strange and Separate People” explains it, that’s why the challah is covered by a cloth:

“We don’t want the bread to feel hurt — that it’s not first… It shows if we care that much about bread, how much more should we care about people.”

It is a central moment in Jon Marans’s brilliant and insightful play about the intersection of God’s law and man’s love. The play, which opened July 19 at New York’s Theater Row Studio Theatre, asks an important question: Can someone be a tzadik, a righteous person, if he keeps all the mitzvot but one?

Phyllis (Tricia Paoluccio) and Jay Berman (Jonthan Hammond) are an observant Upper West Side couple. She has a small kosher catering business. He’s a psychologist. They have an autistic son. On the surface, it appears that they are happy, but it slowly becomes clear that their lives are frayed at the edges.

The catalyst for change is Stuart Weinstein (Noah Weisberg), a handsome young doctor supposedly looking for a caterer. He’s a baal teshuva — newly religious — and gay, something that surprises and displeases Phyllis. But he is also handsome, attentive and helpful with her son, diagnosing and curing an ailment that has made him violent of late. Phyllis and Stuart become friends, and inevitably he gets invited to a Shabbes meal.

Phyllis throws Jay out of the house and he goes to live with Stuart, but that is only the beginning of this powerful drama. Stuart is by his own admission a binger, someone who devours things and moves on “to newer passions.” It happened with his study of art, with drinking, perhaps with his newfound love of religion and even with Jay.

Jay, meanwhile has been living a lie, counseling gay patients on how to cure their “sickness.” Unlike Stuart, he comes out and is immediately ostracized by members of a congregation he has attended for more than 15 years.

It is Phyllis, however, who is the most complex character. She feels twice betrayed by Jay — with Stuart, of course, but also with their son. Jay is able to love him unconditionally, whereas Phyllis is defensive about him and needs to make him better. It is a Quixotic quest, much like her husband’s efforts to cure his patients’ homosexuality.

This plot summary makes the play his appear drier than it really is. In fact, the details are all revealed slowly and with suspense. The staging works particularly well in this small theater, where every physical nuance is clearly visible in the back row. Paoluccio is particularly effective and moving in her role as a woman twice scorned, her eyes tearing and her lips quivering as she works through what has become her life. And the denouement is dead-on perfect.

“A Strange and Separate People” is rich in drama and Jewish tradition. The title comes from comments supposedly made by the late Queen Mother, who said she liked the Jews “very much, but they were a separate people and a strange people” — perhaps in more ways than she ever expected.

Struggling To Be Gay and Orthodox, Without Hypocrisy