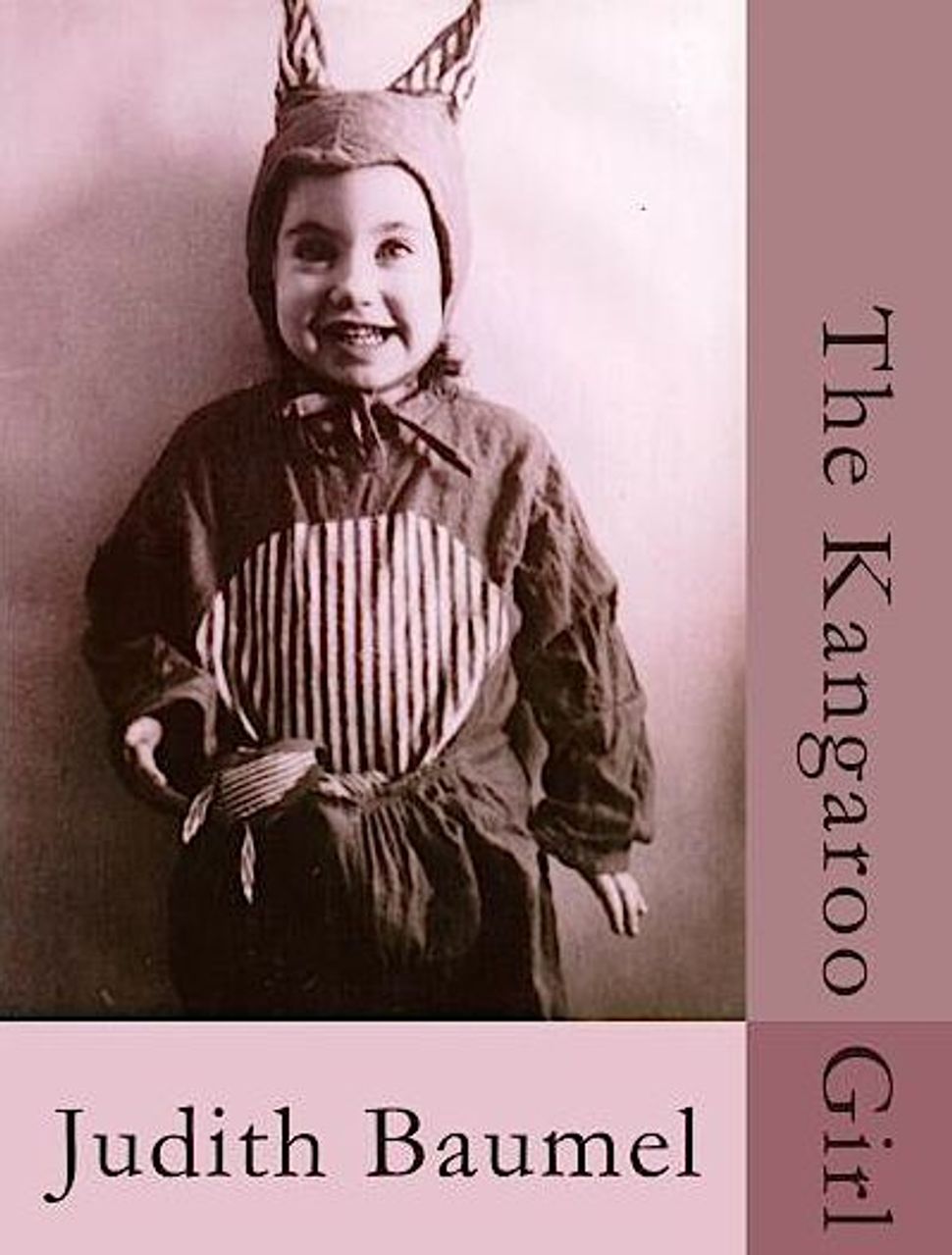 Motherhood and growing up in the Bronx are the two main threads running through Judith Baumel’s recent poetry collection “The Kangaroo Girl” (GenPop Books, 2011). Gaining force with each new poem, these themes grow into personal mythologies that lend themselves to mirth, nostalgia and philosophy.

The collection, of course, is not limited to these two subjects. In fact, the variety of ideas and forms filling the book makes it seem that Baumel is capable of doing anything, and of doing it with virtuosity and wit. The poem “Hem Stitch Hemi Stichs” uses a knitting pattern for its form (the title puns on the word “stich,” which is Greek for a verse or line of poetry), while “Winchester” consists of a sequence of “dialogs” with the medieval chronicler of King Richard I, who was known for his violence against the Jews, and whose words and actions serve as a basis for author’s exploration of her own identity.

Three poems from Baumel’s collection are featured on The Arty Semite today. The first piece, “Blue Vitriol,” is dedicated to Rabbi Manny Viñas, leader of a Spanish-speaking congregation who has been involved in the rediscovery of Conversos — people of Spanish descent with Jewish ancestors who were forcefully converted to Christianity. The piece opens with a phrase reminiscent of the Torah scribe’s blessing before beginning work on a scroll.

The second poem, “The Influence of Peers,” is a light-hearted, funny piece about a child’s undesirable vocabulary, and it creates an ironic juxtaposition of the child’s tornado-like handling of words and the poet-mother’s treatment of language as fragile, all-powerful matter. The last poem hearkens back to the poet’s Bronx childhood, the lives of Jewish and Italian communities, and the personal, literary, and mystical encounters within them. Misericordia, the name of the Bronx Hospital the poem is centered around, is Latin for “loving kindness,” though the poet takes full advantage of the overtones of “misery” lurking in that name.

for Rabbi Manny Viñas
“I am hereby writing this…for the sake of proclaiming the sanctity
of the Torah.”

Do not tell me it is written
I have no right of return. It is not.
Not with a virgule
Not by a virago
Not through a viremia
Is it written. It is written
Sometimes with a virgule
Often by a vav-of-reversal
Always through a mordant
Of gall and vitriol: oak apple, flower
Of copper, lamp black, acacia senegal.

You draw from a dampness that consumes
All, where black birch straddles the air
Over long gone nurse logs, where the sign
Of the Name is ever cycling decomposition
Generation to generation, where the new
Wasp leaves the marble pocked and round shelter
To drift on the wind. And you record with a turkey feather
The voice of the unspeakable Name eternal.

The Influence Of Peers

I don’t want to hear that kind of language in this house
Try shoot shucks sugar
sheleileigh Shalala,
anything but the vowel
which hits the iffy one
and comes too close.
I’m an idiot has taken over,
though not for long.
I’ve ceded ground on butt,
the lost tuchas, tush, tushy
having had the double virtues of ethnic
reminder and gentle enjoyment
of the soft yielding place
from which I wiped with care
that which I wish to hear
called only by cuteness, or evoked.
Well, what could he do,
my muscular ball of opposition,
that whirl of destruction,
wielding Hrunting,
tossing chairs and books
and punching out the wind
behind him screaming
beep you beep you beep you beep.

When the Sinatra brothers blew off

a bunch of fingers, two thumbs, and one

eyeball among them one July 3
mishandling fireworks it seemed good—

of their house on our block) for the two
bicycles, one sled, and one watch they’d taken
from my brother over the years. I don’t
want to talk about revenge or the compact
feeling of goodness that is the consolation

of the meek daily facing small tortures but that
they’d been brought to Misericordia
Hospital where all the Catholics went. The Jews
went to Jacobi or Montefiore, and we lived,
these two threads, amid each other
in a great childish confusion, unable to beat
the weft to the warp. I can imagine the informal
lectures the Catholic kids received, as I recall

mine about heartless popes and the persistent mimicry
of the New Testament. In fact, I’d heard the echoes
of what they heard when Charles Cutaia, who “liked” me,
said he felt sorry for me one lunch period and followed
that with an afternoon in which he pointed, Ruth-like,
to the far wall of the school yard and said “for Judy!”
so that when, at the next pitch, he actually hit
the home run, I had to run home in at least three
states of embarrassment. The Sinatra brothers
went to a hospital I imagined would culture
more misery for them. From the building’s tower the word
hung over the Bronx River Parkway, and driving past
I never hesitated to consider the misery within.

When did the Catholic kids learn the meaning
of the word? During “Released Time,” those leisurely
Wednesday afternoons when they went to catechism
and the Jewish kids wandered the half empty classroom
a little happy, a little lonely?
Did they know that misery develops with one
in need of mercy? Or somehow through
indulgences of food, or a small bench grinning
at your knees with the cynical knowledge of sin
embedded in a gargoyle’s smirk along the pew?
Or that what is at the heart of the word is the heart
and its ability, with its up and down, in and out,
to grant mercy and then remove it, endlessly?
So I later learned reading Benito Pérez Galdós’s Misericordia,
the last of his novelas contemporáneas
where the moral rightness of the Madrid street
embroiders profusions of misericordia,
where the “moor” Almadena/Mordejai teaches the Sh’ma
to the saintly Benina, his Amri, as a magical formula
to achieve the riches neither can extract from their stern
patrons, casual donors and willing victims

who weave pity, compassion, and mercy for these beggars,
these petty thieves, embezzlers, happily optimistic
in their logic as they argue about who has and who doesn’t,
about secret forms of loyalty and faith.
Ah, the bitter loss of the sled. That it was so easy. That
they approached us at the top of the hill, a Snow-Day,
the closed school downhill beyond us. Joey simply said “it’s ours”
and it was. The hospital has shed the vestment
of its old, evocative name, and is now “Our Lady
of Mercy. ” Joey and Bobby and Tony Sinatra
have undoubtedly gone on from the 600 schools,
those garbage containers for the incorrigible
in which they first found themselves judged,
heroes and villains at once, to the sort of ageless
tricks that enlivened Calle Cabeza, to the heroin
that was traded and used far out of my sight,
to the local carting or construction business
where misery is doled out in each paper-less
contract. Every Christmas we watched them set a creche,
some diminished thing along the lines of a presepe
Mrs. Sinatra must have known in her paese.
And though now, certainly, I’m sure that the Mary
they carefully placed inside the straw pitied them, I hated
her face then, hated the license it gave them, the license
it gave us to be squeamish with blood, to shirk
from those images of Mary’s son, his wounds
daily displayed. My self-pity is lately transformed
as I recreate the tableau of all of us complicitous
in that old exchange—
Mrs. Sinatra lamenting her ragazzi, porca miseria,
my father who would not stoop to recover the property,
my brother ever stunned in the release of the property,
and me screaming, screaming my polite curses after
the fact—and for all of us I am now furiously without compassion.