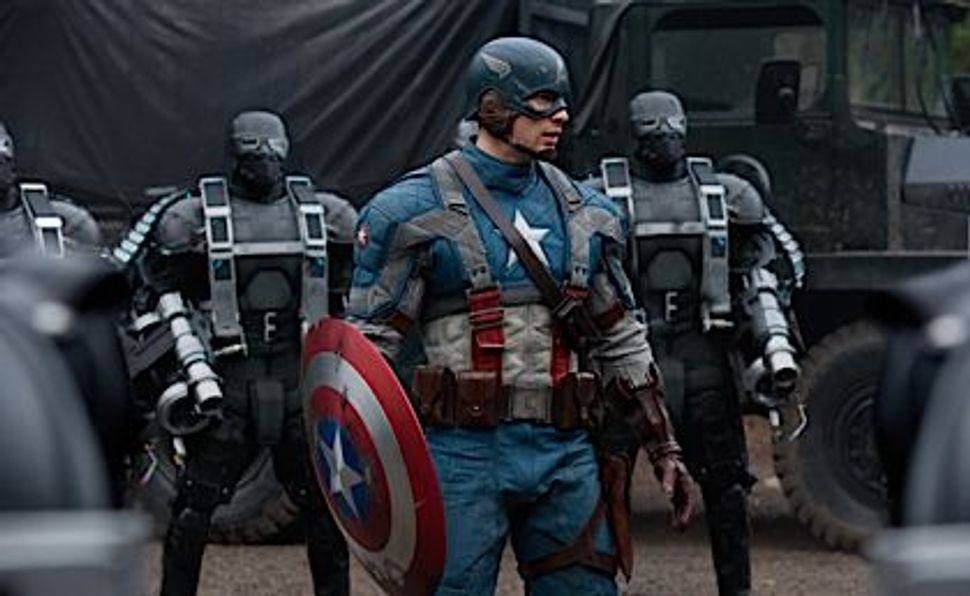 “Don’t win the war without me,” the scrawny Steve Rogers (Chris Evans) pleads to his pal, James Buchanan “Bucky” Barnes (Sebastian Stan), in the first sepia-toned reel of Joe Johnston’s excellent “Captain America: The First Avenger.” Anyone who has a passing familiarity with the 70-year publication history of the Captain America comics knows that Rogers, a runty kid from Brooklyn with a singular desire to serve his country, emerges from a secret military experiment as Captain America, the so-called “Sentinel of Liberty”: a bastion of American will, military might and do-goodery more formidable than Uncle Sam himself.

In 1940, when Captain America was brought to life in the pages of Timely Comics by two Jewish kids from Manhattan, writer Joe Simon and artist Jack Kirby, he was deliberately crafted as an allegory for American interventionism. As if his red, white and blue getup wasn’t obvious enough, Cap carried a shield that bore a canny resemblance to the logo of the anti-war America First Committee, robbing the isolationists of their own iconography. The first issue of “Captain America,” released a year before the attack on Pearl Harbor, featured the image of its hero socking Adolf Hitler on the jaw. It moved more than 1 million copies, outselling such news publications as Time magazine. The message was vital: The United States was a global super-soldier, and it was its duty to intervene. In short, “Don’t win the war without me.”

In Johnston’s “Captain America,” which opened in the United States and elsewhere July 22, the allegorical weight is pleasingly eased. The film is bound to come under fire as a propagandistic recruitment poster, but “Captain America” is, apart from a first-rate adventure picture, a self-consciously nostalgic paean to patriotism — a sly, flag-waving caricature. Like “Indiana Jones” or “Inglourious Basterds,” it’s not sinister historical revisionism (unlike Michael Bay’s “Pearl Harbor,” which falsely blamed the “date that will live in infamy” on liberal military brass too busy golfing to phone in a warning), but historical fantasia. And because it is not the duty of pulp comic books or their big-screen adaptations to grapple with the facts of history, “Captain America: The First Avenger” approaches these thorny problems in the most elegant way it can: by eliding them altogether.

Take, for example, the film’s central villain, the mutated German scientist Johan Schmidt, aka the Red Skull (Hugo Weaving). Schmidt leads Hydra, a splinter faction of the Third Reich whose military salute resembles the Nazi’s stiff, one-armed salutation, but with both arms extended and fists closed, the suggestion being that Hydra is doubly threatening. But the Red Skull’s scheme to use an ancient power to single-handedly win the war — not for the Axis, but for Hydra (Berlin, too, is on his chopping block) — smacks of cartoony super-villainy, not the out-and-out evils of the Reich. And Hydra’s advanced weaponry eviscerates enemies in a sizzle of bluish computer-generated flame, leaving none of the Reich’s material traces. What Hydra represents, under the maniacal boot heel of the Red Skull, is a streamlined, more perfect Nazi regime: one unburdened by the nastiness of prejudice, anti-Semitism and genocide. Hydra is the equal-opportunity oppressor.

Of course, it’s tempting to balk at the way “Captain America” systematically sidesteps the Holocaust and trades the real gravity of World War II for the levity of a Saturday morning serial. But would it be better, or less flippant, to have Cap and his commandos ride their souped-up motorcycles through Nazi territory, liberating the persecuted with a wave of his stars-’n’-stripes shield? Consider the uneasy, emotionally incoherent tones of Marvel’s X-Men films when they attempt to reconcile the fictional character history of Shoah survivor Magneto, with imagery of the camps themselves. This is ugly business. In wholly displacing the historical war — the on-screen adventures of Captain America and his elite team see them gate-crashing and zip-lining through such European locales as Switzerland, peripheral to World War II’s central conflicts in France or Italy — Johnston and screenwriters Christopher Markus and Stephen McFeely do not deny anything. What they do is reinterpret the spirit of the wartime serial and the bullying “I Want You” conscription placard as a series of giddy, swashbuckling exploits in a way that is, in the most productive sense of the word, ironic. Even that iconic image of Captain America clobbering the Fuhrer is presented here as a piece of caricatured vaudeville stagecraft, performed as Rogers tours the country, selling war bonds, with the punch itself connecting only from the perspective of a slack-jawed audience.

As far as Simon and Kirby’s earnest allegorical imagining of Cap as a liberating force of American interventionism, well, that’s a bit harder to swallow in 2011. Throughout his 70-year life in the funny pages of Timely and Marvel Comics, Captain America has evolved from a stand-in for screaming eagle jingoism and kowtowing government bagman to an incarnation of an apolitical idea of America — of life, liberty and the pursuit of happiness unfettered from partisanship and agendas. If it’s not the duty of military service and self-sacrifice that this First Avenger epitomises, it’s a no less sentimental American ideal: the pleasures of a wide-eyed afternoon spent munching popcorn and sipping soda in the cool of the local movie house.

Watch the trailer for ‘Captain America: The First Avenger’: