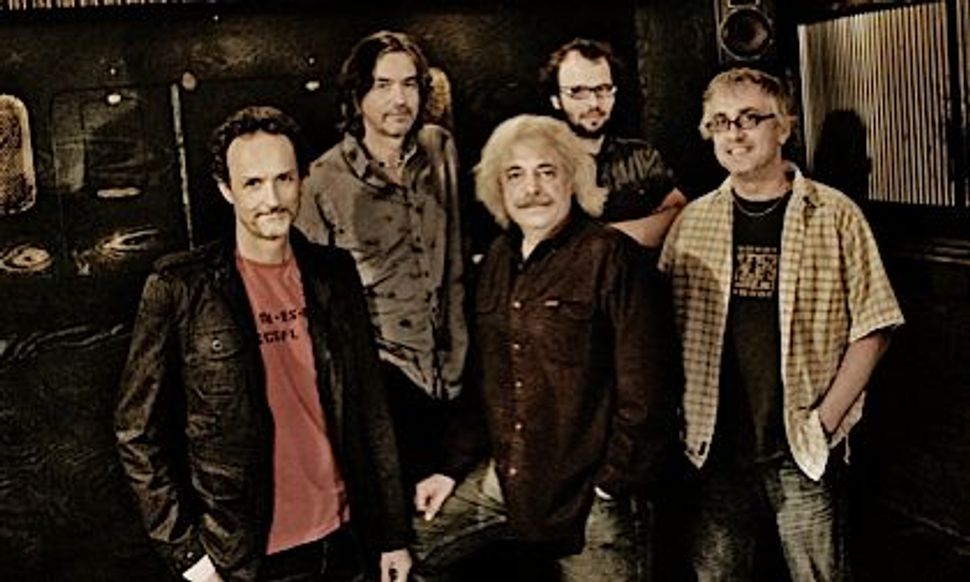 I’ve just spent two days in a Prague studio helping record the vocal tracks for a new CD by the Czech country/bluegrass/fusion group Druha Trava. Founded 20 years ago, DT has brought out more than a dozen albums, including several in English. The new CD is the first that will primarily feature English-language versions of singer-songwriter Robert Krestan’s distinctive original songs. I made the translations, and the studio session was the culmination of a collaborative project that had taken more than five years to come to fruition.

Most people know me for my writing and other work on Jewish issues, but for much of the past decade I’ve also been exploring Europe’s “imaginary Wild West,” spending time at Wild West theme parks, swinging door saloons, and American-style country music events.

I first heard Druha Trava — the name means “Second Grass” — back in 2004, when I was bouncing around the Czech Republic, following the summer bluegrass festival circuit. I don’t speak Czech, but the group has been my favorite band ever since.

The flourishing Czech bluegrass scene dates back decades and has its roots in the so-called Tramp Movement, a Czech outdoors and music subculture that originated after World War I and embraced American-style campfire singing and the romance of the West.

But Druha Trava uses American roots music as just a starting point for its own synthesis of bluegrass, rock, country music, folk and even classical motifs. American banjo great Tony Trischka, who has toured with DT, was one of the first to call the sound “Czechgrass.”

All the musicians are virtuosos. But it’s Krestan’s songs and raw, gritty vocals that make DT’s music particularly compelling. American reviewer David Royko once said his voice embodied the “power and beauty of a thick slice of unvarnished oak.”

Krestan is an iconic performance figure, famous among Czech fans for his poetic and often enigmatic lyrics. He has also rendered many English songs into Czech — DTs’s 2007 CD “Dylanovky” features Czech versions of Bob Dylan songs. Aside from music he is the Czech translator of books by Norman Mailer and other American writers.

I started translating Krestan’s songs into English in 2006. My first goal was basic: I loved the Czech originals, but I wanted to know what they meant. As I started working, though, it seemed much more logical — and in fact, even easier — to put them in a rhyming form that could be sung. The process was surprisingly straightforward.

A young student in Prague, David Kraus, supplied me with word-for-word equivalents. David’s father Tomas is an old friend, the secretary of the Federation of Czech Jewish Communities, but he also knows a lot about the Czech country music scene. In Communist times Tomas’s late brother produced, wrote and translated songs for several key Czech tramp and country-style groups.

I took the words that David gave me, compared them to the rhythm of the original Czech lyrics, and listened over and over to the original songs in order to capture their meaning and rhyme structure as well as to fit them to the melodies.

Czech is a more bristly language than English, with quite different sounds and cadences, and Krestan uses words for their tonality as well as meaning. But remarkably, my lyrics got to a point where they seemed to click into place. Later, Krestan and I spent a couple of sessions together tweaking the English to improve both nuance and “singability.”

In the studio, as Krestan sang into the microphone, I stood in the sound booth with DT’s banjo player Lubos Malina, who is co-producing the CD with Nashville-based Steve Walsh. Five years on, it was the first time I heard the songs sung in their final form. (Walsh oversaw the recording of the instrumentals in Nashville last spring.) They sounded, well, right. I focused on recording levels and intonation, but I couldn’t keep a goofy smile off my face. If all goes as planned the CD, called “Shuttle to Bethlehem” will be out in September. Druha Trava begins a tour of the US on October 13 in Park Rapids, Minnesota.