Larry David on How to Solve the Israeli-Palestinian Conflict 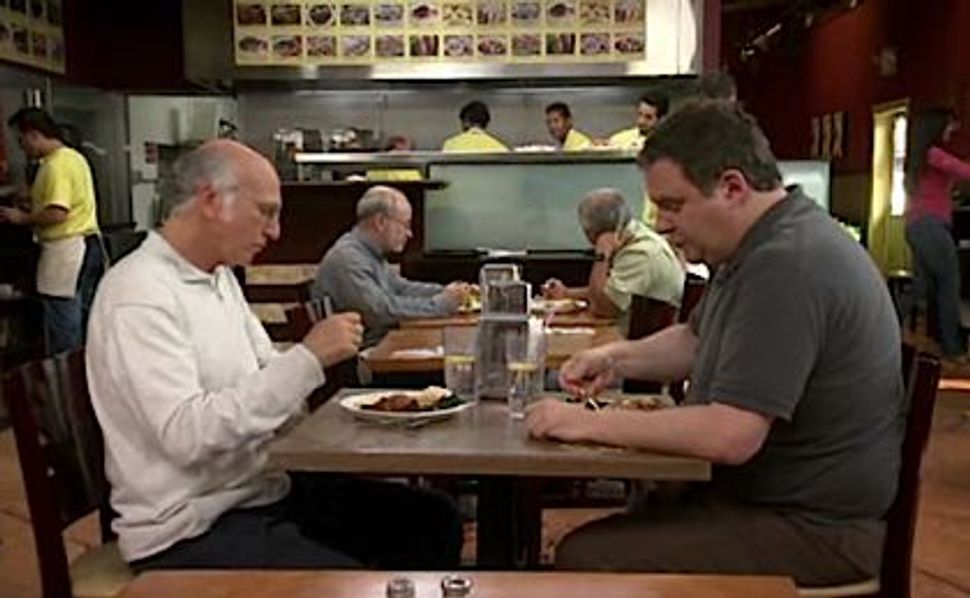 The more Larry David pushes the envelope, the more his fans love him — and the more fans he seems to attract. That could help to explain the ratings bump for the July 24 installment of “Curb Your Enthusiasm,” in which David mines the Israeli-Palestinian conflict for laughs.

The episode, the highest-rated of the season so far, is called “Palestinian Chicken,” and focuses on the relationship between Larry and Shara, the owner of a Palestinian eatery called Al Abbas.

In keeping with his persona, David turns out to be less than an ardent Zionist, and finds Shara’s hostility toward Israel appealing. “You’re always attracted to someone who doesn’t want you,” he remarks. “Well, here you have someone who not only doesn’t want you, but doesn’t even acknowledge your right to exist, who wants your destruction. That’s a turn-on.”

The episode continues with a turf war between Goldblatt’s Deli and a second Al Abbas location opening nearby. David observes — correctly, it turns out — that a Palestinian eatery could be a good date spot for a Jewish adulterer, since other Jews are unlikely to see him there.

Some Israel lovers will find “Palestinian Chicken” distasteful, but it’s a hit among David’s fans. Whether it lives on like his survivor/”Survivor” episode remains to be seen.

Watch a scene from ‘Palestinian Chicken’:

Larry David on How to Solve the Israeli-Palestinian Conflict