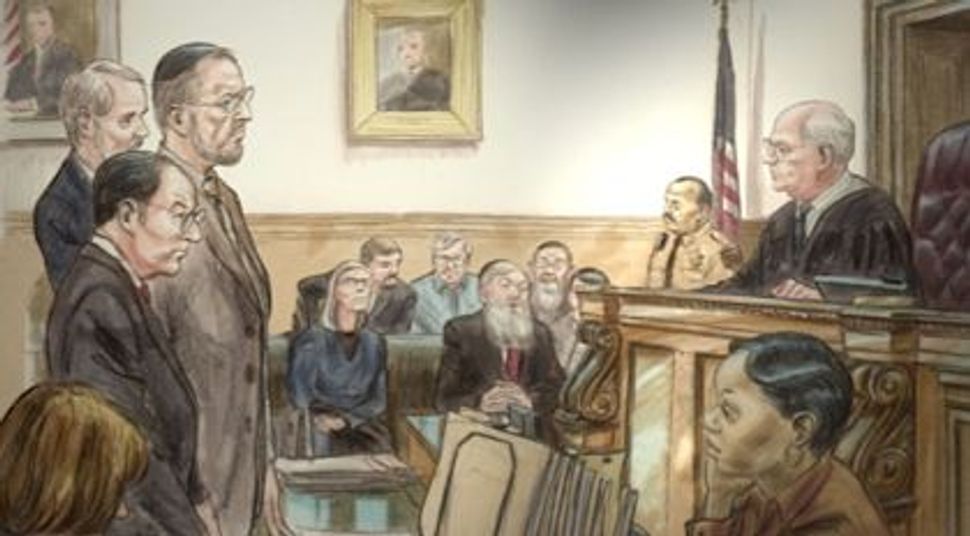 A courtroom sketch from Yisroel Shapiro’s trial on charges of sexual molestation. Courtesy of Bennett-Robbins Productions.

A handshake was all it took to set Scott Rosenfelt, an accomplished filmmaker, on a journey to break the wall of secrecy protecting child sex abusers in the Orthodox Jewish community.

The way Rosenfelt tells it, a friend, Phil Jacobs, then executive editor of the Baltimore Jewish Times, was interviewing a sex abuse survivor in a coffee shop, when Jacobs introduced Rosenfelt to the survivor.

“Some new energy passed to me. I felt like I was shaking the hand of a shattered person,” Rosenfelt said June 29 at a screening of his film, “Standing Silent,” at the American Jewish Press Association conference in Dallas. From that moment on, Rosenfelt said, he had to make the film.

The 81-minute documentary, screening July 31 at the San Francisco Jewish Film Festival, is told mainly through the eyes of Jacobs, who has been on a years-long campaign to print the stories of those who allege they have been molested by rabbis in the Orthodox community. Jacobs, who was recently named the editor of the Washington Jewish Week, is hell bent on breaking the silence of an insular world that protects the molesters and shuns those who tell secular authorities. Recently, Agudath Israel of America reiterated its policy that one must consult a rabbi before reporting cases of sexual abuse to the police.

At one point in the film, the camera captures Jacobs picking up the phone and telling a rabbi he knows that two victims have come forward to claim he had molested them, and that his name was going to be in the paper. For a journalist, that’s about as difficult a phone call as there is to make.

It takes even more courage for those who have been abused to face the cameras, as several men and women do, and to tell how their lives were forever changed by someone they had been taught to trust.

The film is intense and surprising, and Rosenfelt’s talent in unspooling a story is evident. The film received a Sundance Documentary Filmmaker Grant and now has a distributor. Rosenfelt said he’s hoping to get it screened at film festivals around the country.

It could be that this film, like “Trembling Before G-d,” a documentary about homosexuality in the Orthodox world, is a game changer — that it will prompt more survivors to come forward and focus unblinking public scrutiny on the hypocrisy that protects criminal behavior at the expense of those who suffer.

Watch a trailer for ‘Standing Silent’: