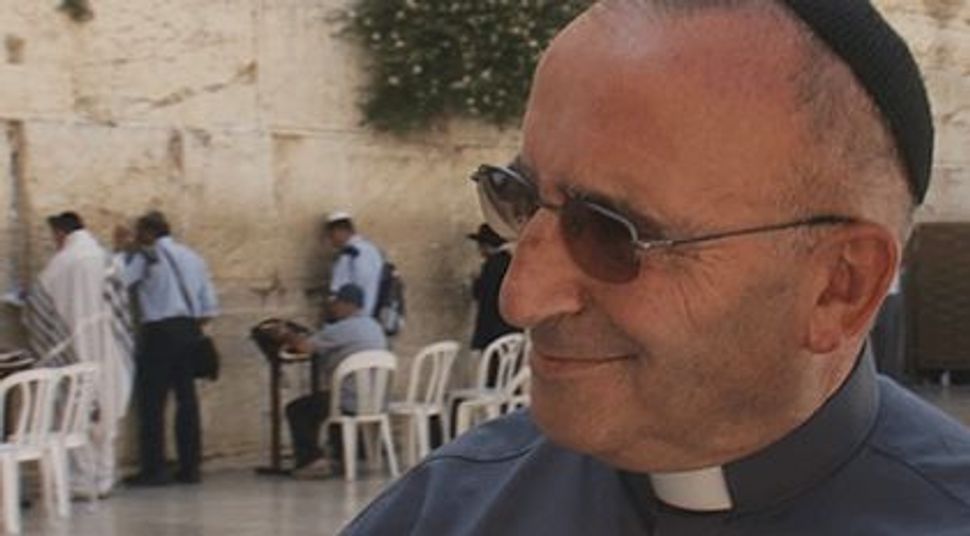 One is tempted to declare that “Torn,” the documentary by Israeli filmmaker Ronit Kertsner making its American debut at the San Francisco Jewish Film Festival, is about the “Who is a Jew?” question. It is. But it is also about more than that.

The film tells the story of Romuald Jakub Weksler-Waszkinel, a Polish Catholic priest and philosophy professor in his late-60s who decides he wants to immigrate to Israel. In what is likely the last case of a European priest learning that he was born to Jewish parents killed in the Holocaust, Weksler-Waszkinel decides to embrace his Jewish identity and make aliyah based on the Law of Return.

As it did with the Brother Daniel in his precedent-setting case in 1962, the Israeli government refused to grant Weksler-Waszkinel citizenship, arguing that a Jew who practices another religion does not qualify under the Law of Return. Instead, it granted Weksler-Waszkinel, whose adoptive Polish parents were named Righteous Gentiles by Yad Vashem, temporary residency on a religious worker’s visa.

Weksler-Waszkinel, who continues to devote himself to learning Hebrew and to Jewish religious practices, has decided to remain in Israel despite his disappointment in the government’s decision. Yaakov, as he is now known, is not, in fact, a priest any more. After studying in an ulpan on a religious kibbutz, he now lives in Jerusalem and works in the archives of Yad Vashem.

No one dies and no one falls gravely ill in this film, yet it is heartbreaking. A disaster, indeed, befalls the protagonist. In his old age he denies and abandons a lifelong identity to assume another, which will never truly be recognized and accepted. Not in Israel, and not in most Jewish communities around the world.

Weksler-Waszkinel has agreed to renounce Catholicism, but he will not give up his belief in Jesus. Therein lies the reason why he is not recognized as a Jew by his fellow Jews. What he labels fanaticism, others view as following the Rabbinic injunction to maintain a fence around the Torah. The fear of religious syncretism is still so strong that it can drown out humanitarian exceptions.

It would be difficult to watch a story about any Jewish-born convert returning to Judaism. It is even more difficult to see an elderly Man of God undergo such a difficult, unfulfilled journey.

Israel’s Interior Ministry may not be ready to bend in Weksler-Waszkinel’s favor, but his calm presence and unshakeable belief have made an impression not only on Kertsner, but also on some of the religious kibbutzniks with whom the former priest lived and prayed for the good part of a year. The filmmaker recounted: “One of them spoke at the Jerusalem screening of the film and said what he learned from Yaakov was the power of faith — and although he knew this was not the place to say this he felt that he learned from Yaakov that it doesn’t matter which God you believe in, as long as you believe.”

Watch the trailer for ‘Torn’: