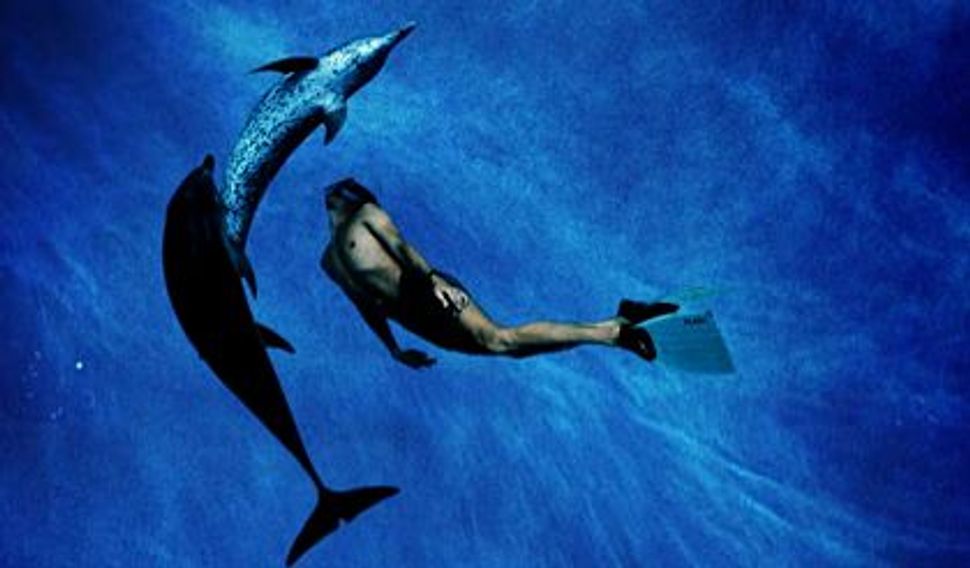 An adventure of the heart, mind and sea, “Dolphin Boy,” screening August 1 to 15 at the Tel Aviv Cinematheque, dives into the blue mystery of the ocean and its redemptive powers with all the suspense of a thriller. Written and directed by Dani Menkin and Yonatan Nir, the film tells the story of a young man, Morad, who was savagely beaten in 2006 after sending an innocent text message to a girl in his class. Although he recovered from his physical injuries, he became detached from the world and unable to speak. Five years later, at the film’s Israeli premiere on July 14, 2011, Morad stood onstage in front of a full house, a contemporary hero and a living testimony to an amazing recovery.

Morad’s family, with their unswerving devotion and their willingness to do and try anything that might help him, is at the heart of this story. His father, Asad, leaves his job and home to take Morad to the Dolphin Reef in Eilat, while his mother and sister remain in their village of of Qalansua in northern Israel.

Yet the film does not attempt to mythologize the process of recovery or suggest that therapeutic interaction with dolphins is a miracle cure. It is as much a hymn to science, research, documentation, and the wonders of an open and tolerant mind as it is to the wonders of love and dolphins. Much of the magic of this film comes from the fact that we are with Morad all the way, from seeing a silent boy whose frightened eyes refuse any contact, to a man who faces the camera with warmth and confidence, talking about his experiences with honesty, intelligence and sensitivity. Composed entirely of real-time footage and interviews, the access granted to the filmmakers for this project was exceptional, and the story of making the documentary reflects the spirit of the film itself.

Nir, an underwater cameraman at the Dolphin Reef in Eilat who, first felt the healing effect of the dolphins after returning to the reef followng an an injury in the second Lebanon war. Morad arrived at the reef two months later, at the recommendation of his psychiatrist, Dr. Ilan Kutz. Unresponsive to traditional therapeutic methods, with hospitalization as the only other alternative, Morad came to Eilat with his father to try dolphin therapy.

Nir recalled in a telephone interview that when they first approached Kutz with the idea of telling Morad’s story, he “said that everything had to be done with Morad’s agreement. He warned us that we are entering a story that will take years and that we are taking a risk.”

The risk was twofold: not knowing what the conclusion of the story would be, and not knowing if Morad would eventually give his approval to screen the film. Yet in this way the process of creating the film became part of the treatment, as Morad became an active partner in making his story public, a decision that required openness and courage at a point when he was making his first tentative steps toward re-connecting with the world. Kutz also gave his full cooperation to the project, giving the filmmakers tapes he had made of his treatment of Morad, which, as Nir said, were “What Dani called documentary gold.”

On the first day at the reef Morad can be seen sitting on the dock with Omer, his guide on the journey with the dolphins. The dolphins at the reef live as they do in nature, in a school; contact with humans is their choice. When a dolphin swims up to the dock, Omer tells Morad, “She’s here for you.” Yet Morad turns away, and refuses to look at the dolphin. The next day, sitting on the dock once more with Omer, Morad reaches a hand into the water and touches the dolphin’s head. It is a moment of startling beauty and amazement. It is about as close as I have come to witnessing a miracle.

Menkin and Nir take the viewer into Morad’s underwater world: open, wide, flowing, blue as a vision of heaven.Yet the beauty of these scenes is enhanced by an understanding of nature as a system of interdependence. This is not a story of recovery as a single dramatic event, ascribed to one source. It is a story of the journey of an individual with an inner core of strength, resilience and love, among a community of supportive individuals including family, therapists, dolphins, friends, and even documentary filmmakers, each contributing in a different way. An ocean of love that prevails over an act of violence, “Dolphin Boy” celebrates the capacity of the human spirit to grow, change and heal, through a deep respect for individual differences, beliefs, love and life.

Watch the Trailer for ‘Dolphin Boy’: