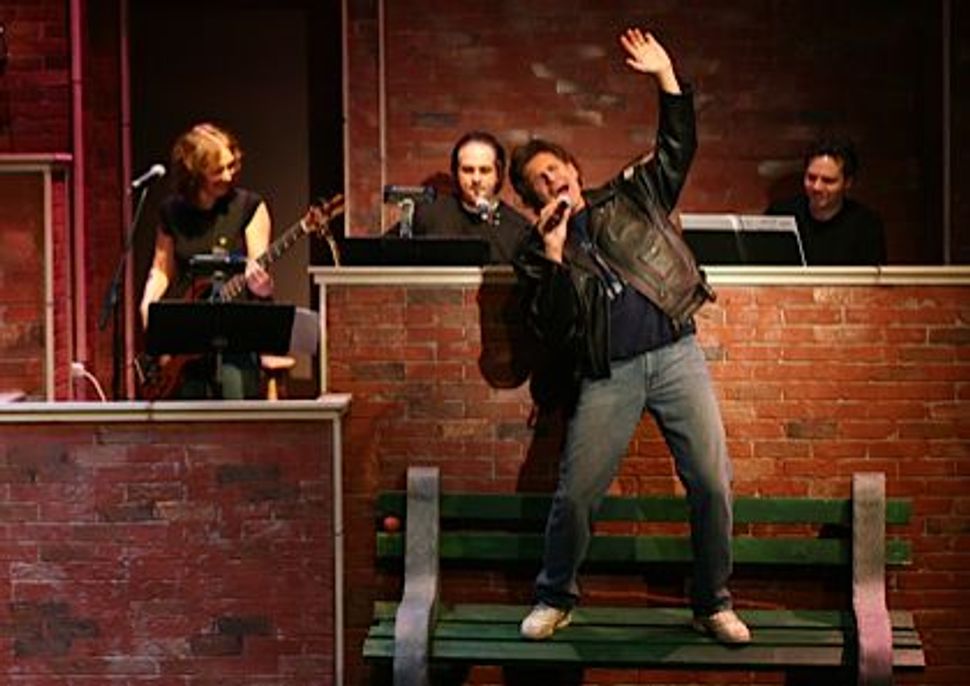 There is something to be said for knowing one’s audience. The people sitting in the cushioned, expensive seats all have expectations, wants and needs. Perhaps they want to forget; to laugh; to be touched, or to hear a really good story. Or maybe they want to remember.

Jake Ehrenreich’s one-man comedy musical, “A Jew Grows in Brooklyn,” playing until August 21 at the Queens Theatre, is a trip back in time to his childhood in Brownsville. The son of Polish Holocaust survivors, and the first of his siblings to be born in America, Ehrenreich tells of his struggles to maintain an all-American identity with a family so recently arrived from the Old Country.

I am not nearly old enough to be considered part of Ehrenreich’s target demographic for this production. He is my father’s contemporary, if anything. And though much of the performance is spent interacting with the audience, citing specific details of the outer boroughs of New York City in the 1950s and 60s, the message of this piece reaches beyond Baby Boomers.

Ehrenreich’s musings on his parents’ dark past and the re-building that took place on this side of the Atlantic, speak of hope, renewal, and the need to tell our stories. With the aide of photographs, some Yiddish lullabies and footage from his father’s interview with the USC Shoah Foundation Institute, the journey is illustrated powerfully, but lightly. Ehrenreich does a deft and creative job of not dwelling too much on tragedy, but using it to show the joy that could be found among the ruins.

Perhaps the greatest example of this is the section highlighting his summers in the Catskill Mountains, watching his parents and their survivor friends laugh each night in the hotel nightclub at the multi-talented comedians who would sing and dance and tell suggestive jokes. Multi-talented himself, Ehrenreich assumes this role and works the crowd in his own cheeky, but historically accurate manner.

Being the youngest person in the crowd, I derived great joy from watching the audience who, hanging on every word of Ehrenreich’s story, felt comfortable enough to audibly assert their recognition and understanding of many of his anecdotes. He talks to them like friends, which is perhaps the best aspect of his performance. Even if things lag, or shift awkwardly, he has an audience wholly on his side, ready to share their next collective memory.

I even found myself taking part in the nodding and the “mm-hmm”-ing, seeing my own father in these stories. Just 10 miles north in Flushing, there was a similar boy playing baseball in the street, his mother yelling for him out the window, who now in his middle age can look back and, with all the potency of yesterday, remember.