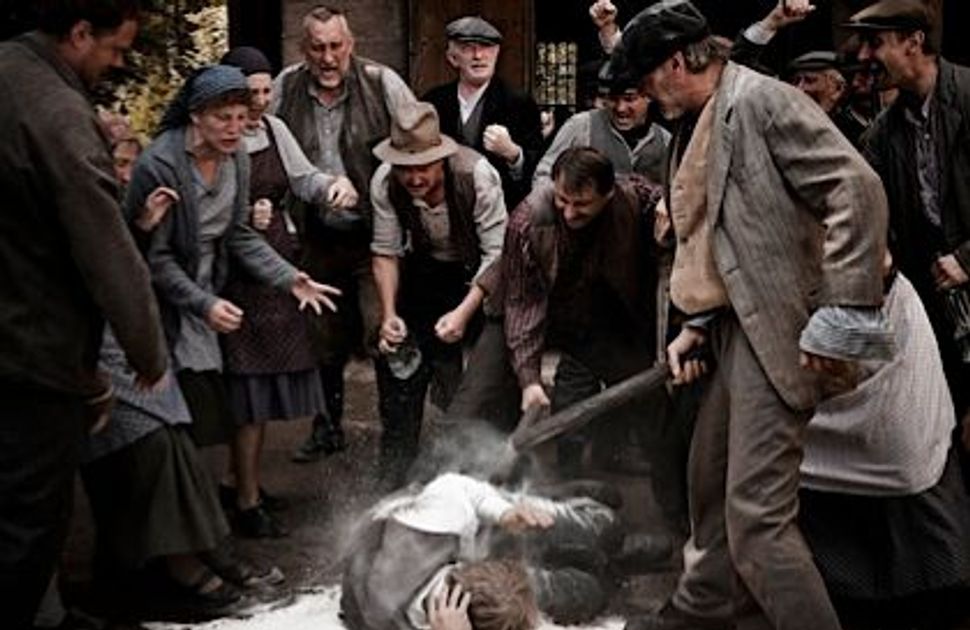 The Nazi occupation of Czechoslovakia began with the annexation of the largely German-speaking Sudetenland in October 1938. Most people are unaware of the aftermath of the occupation, in which Czech people took revenge on their German-speaking neighbors. This story is explored in a German-Czech-Austrian feature film titled “Habermann,” opening August 5 at New York’s Quad Cinema and being screened at the JCC in Manhattan from August 7 to 11.

The film tells the fact-based story of a wealthy mill owner and the scion of an old German family, August Habermann (Mark Waschke). He is apolitical and initially naïve about the Nazis, but he believes in dealing fairly with his neighbors and employees, whether they are Czech or German. The woman he marries in 1937 is a Czech, as is his best friend, a forester who is married in turn to a German.

Still, August’s orphaned young brother, Hans, enthusiastically supports the Nazis, as do many (if not most) Sudeten Germans. Hans is an exemplary member of the Hitler Youth movement and eagerly volunteers to join the Wehrmacht to fight the Soviet Union.

All the Habermanns are good Catholics, but a baptismal document reveals that August’s wife, Jana, an orphan brought up by nuns, was fathered out of wedlock by a Jew named Silberstein. Now, August must try to protect her and their young daughter from this dangerous fact.

It is of incidental interest that the Nazi villain, the SS officer Koslowski, is played by Ben Becker, a German actor who is Jewish on his mother’s side. Koslowski uses the truth of Jana’s origin to force August to appear to betray 10 of his Czech workers in retaliation for the killing of two German soldiers. August has actually saved 10 others by bribing Koslowski with family heirlooms, but the appearance of collaboration will go badly for him.

The opening and closing scenes of “Habermann” depict the brutalities inflicted upon defenseless German civilians. The film’s press packet points out that three million German-speaking Czech citizens were forced into Germany and Austria after the war; 10 million overall were expelled from Eastern Europe. The film’s poster quotes Czechoslovakia’s President Eduard Benes saying that they should get “rid of these Germans forever,” and Franklin D. Roosevelt’s concurrence.

As many as 270,000 Czechoslovakian Germans were murdered. Eye-witness testimony, photographic evidence and the physical fact of mass burial sites all testify to the savagery inflicted upon German civilians in the immediate aftermath of the Nazi defeat in 1945. These crimes have never been prosecuted.

Yet, since much of the film depicts instances of local German collaboration with the Nazis, “Habermann” is not an unseemly exercise in revisionist exculpation of these Germans. Rather, it treats most of its characters as morally complex individuals. Even if victimized, Czechs and Germans (like all people) were capable of behaving badly.

Watch the trailer for ‘Habermann’: