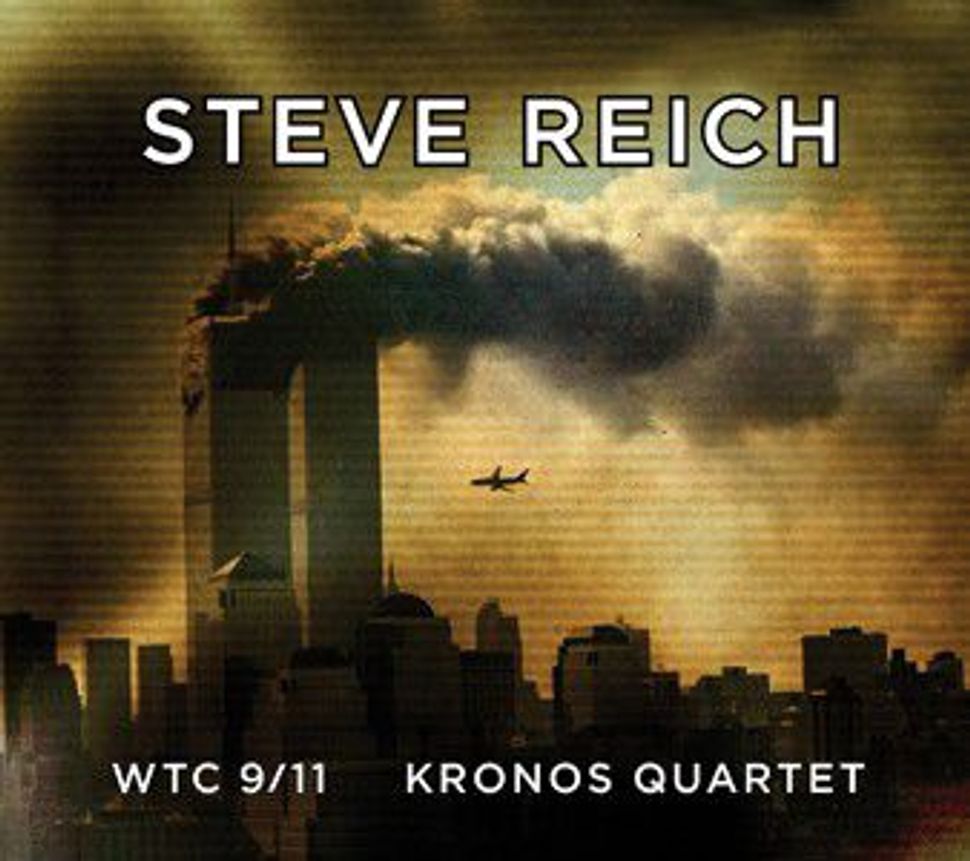 “[It] looks like something swiped from Rudy Giuliani’s presidential campaign press shop circa January 2008,” Seth Colter Walls wrote in a July 21 piece for Slate about the cover for Minimalist composer Steve Reich’s “WTC 9/11.”

Walls had no problem with “WTC 9/11” itself; he called Reich’s composition for three string quartets combined with recorded voices “a complex and intriguing achievement.” His beef was with the album cover art for the Kronos Quartet’s studio recording of the piece, which is set for release on September 1. The cover features a photograph of the second plane bearing down on the second tower of The World Trade Center as smoke billows out of the first tower. Walls noted that the image was darkened and dirtied, making the upsetting image even scarier.

As it turns out, Walls was not the only one displeased with the choice of album art. Many thought that the commercial use of this traumatic iconic image was insensitive and inappropriate. In response to an uproar over what was perceived as a lack of good taste, Reich’s prestigious Nonesuch label announced last week that it would pull the cover, according to a follow-up piece on Slate.

Replacement art has not yet been released, and Reich has not actually apologized for the original image choice. Here is what he had to say:

When the cover was being designed, I believed, as did all the staff at Nonesuch and the art director, that a piece of music with documentary material from an event would best be matched with a documentary photograph of that event. I felt that the photo suggested by our art director was very powerful, and Nonesuch backed me up. All of us felt that anyone seeing the cover would feel the same way.

When the cover was released on the Nonesuch site and elsewhere, there was, instead, an outpouring of controversy mostly by people who had never heard the music.

When “WTC 9/11” was performed by the Kronos Quartet …the reaction of the public and press was extremely thoughtful and moving. To have this reaction to the music usurped by the album cover seemed completely wrong. Accordingly, the cover is being changed.

Interestingly, the image of train tracks on Reich’s Holocaust-themed “Different Trains” album cover did not provoke such a response. Then again, one set of tracks looks the same as another, whereas there is no mistaking exactly which towers those were on the “WTC 9/11” album cover.