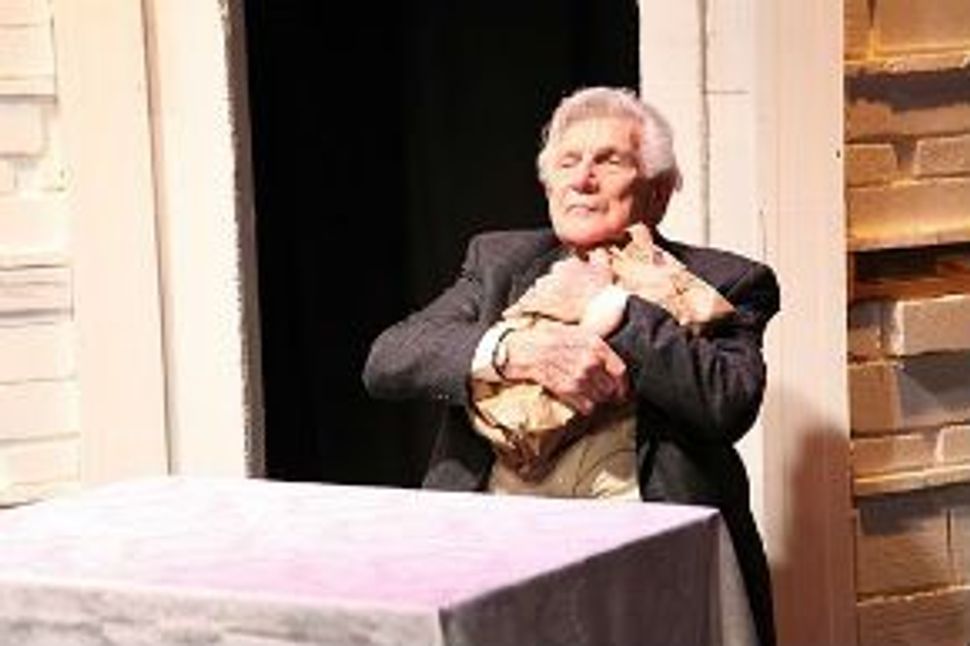 Noah Keene in Timothy Scott Harris?s ?A Walk in His Shoes? Image by Gerry Goodstein

The Workshop Theater Company provides a stage for many of these bourgeoning talents, through their various reading series, workshops and mainstage productions, some specifically focused on a particular culture or subculture. Their latest venture, “I Laughed, I Cried…5 Short Plays to Make You Ferklempt” explores the heart and hardships of the Jewish faith from different angles by different writers.

First up is “A Walk in His Shoes,” which is based on a true story from author Timothy Scott Harris’s own family history. Set in modern-day Poland, we see Gabriel (Noah Keen), an escapee from his small town prior to the Nazi occupation, return home for the first time to a festival honoring those who were forced out nearly 70 years ago. Gabriel is unsettled by the showy nature of this homecoming, and voices his regret of a culture gone and forgotten from the city it built. The basis of this piece is powerful — a new and interesting look at a post-war situation on the other side of the world. Yet while Keen’s performance is strong, the would-be reconciliation that eventually comes is rushed and not fully fleshed out, leaving him with an emotional journey that lacks a real payoff.

Next we have “Telephone Call for Francine Stein” by Laurie Graff, a family drama of infidelity and obligation set against the backdrop of the 1968 Catskill Mountains. The performers do a good job of injecting humor where possible, and overcoming awkward scene shifts as they move through the piece, but ultimately this is a story we have heard before. If anything, it has the potential to become a longer play, really exploring the flaws of each of its star-crossed characters. This version, however, feels truncated, and deprives us of much of a message.

In Michael Lazan’s “Synagoguery,” an affable and insightful Rabbi (played by Broadway veteran Joel Kramer) attempts to help a lost soul return to his faith in the wake of his parents’ death. Kramer is bubbly and fun to watch, but the abrasive shmuck he’s guiding (Joseph Franchini) is written as too one-note. A conversation that could have a real emotional journey is stifled.

“An Interesting Story” by Eddie Antar is a solo piece in which desperate Washington Heights housewife Ellenor (Emily Zacharias) talks to the audience about a recent, uncharacteristic indiscretion. Zacharias is commanding, and delivers her lengthy speech with clarity, variety and humor. She seems to be experiencing her tale — rather than simply relating it — and that allows the audience to feel a strong connection to her.

Finally, Linda Segal Crowley’s “The Good Dairy Land” takes us all the way to Iowa, where a family struggles to cope with the slow degeneration of its patriarch while revisiting old memories. This piece surely has its heart in the right place, but is too caught up in its bizarre structure to really shed light on a potentially powerful situation. None of the characters seem to feel the gravity of the circumstances; they breeze through with unnatural brevity, rendering the message of the story unclear.

The plays span a great many worthwhile topics, but they are clearly works in progress. Some of the stories are not explored deeply enough, others feature ideas that are not fully formed, and many showcase themes that have already been explored and turned over in our culture to the point of cliché. And while the actors are all experienced, many of them cannot overcome the stilted dialogue and unrealistically quick emotional journeys that the playwrights have wrought.

But there is something good here. There is poignancy, there is love; there are good stories to be mined. The purpose of this evening — to showcase emerging voices — was certainly achieved, and it cannot and will not stop here. The writers must keep writing; turning the world inside and out to see what can be created, and what there is still left to discover.