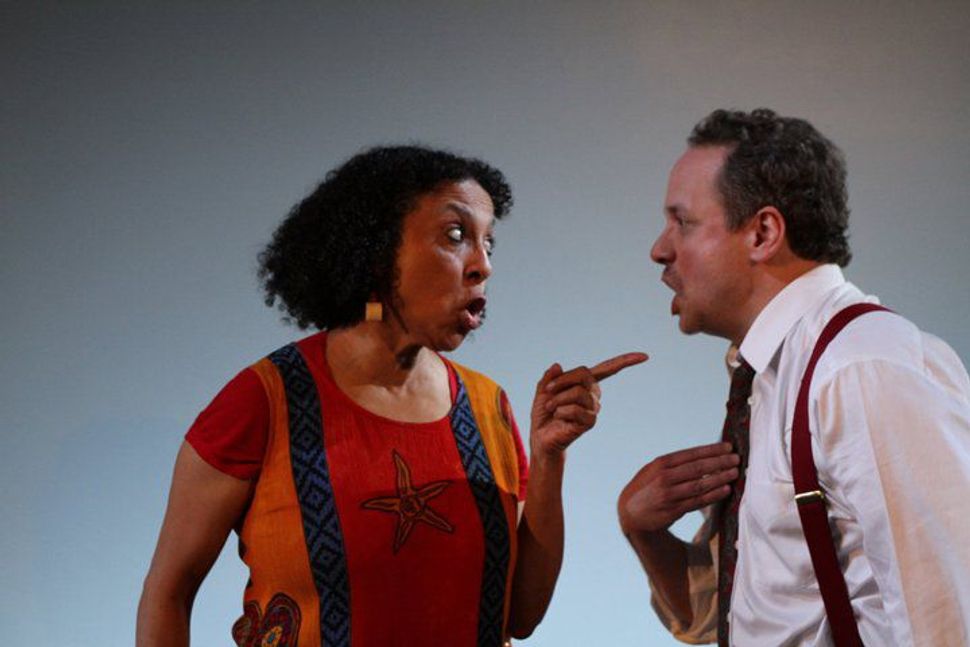 This line gets at the most basic tenet of live theater, and what should separate even the most cerebral, “issues”-minded work from a debate in a freshman “Race and Diversity” lecture: A play is, above all else, a story. It helps immensely if that play also has characters interesting enough to make an audience care about whatever story that is. This, unfortunately, is a concept that “Chasing Heaven” fails to grasp, making the bit about Trout Bait memorable only for making me desperately wish it were heeded.

The play chronicles the creative struggle of Kinshasa “Tree” Morton (Christine Campbell), a Pulitzer Prize-winning black novelist commissioned to rewrite “Chasing Heaven,” a broadly drawn, dialect-heavy black folk opera from the 1930s, and make it more palatable to modern audiences. Along the way, she is haunted by the ghost of show’s creator, famed Tin Pan Alley composer/lyricist Joshua Gerwitz (Greg Horton), who is ticked off by the way Morton is tampering with his most famous work. The timeline of the plot shifts between Gerwitz writing what he originally titled “Chasing Hebben” in 1935 and an artistically blocked Morton pacing around a skeletally furnished room of the Gerwitz estate in 2008. These chronological jumps couldn’t be more straightforward; nevertheless, an enthusiastic “curator” (Daniel Carlton) is on hand to announce each one, in case anyone gets confused.

It’s a premise that, with more care, might have been engaging, especially given the uncanny timing of “Chasing Heaven’s” Fringe run. Precisely the same drama unfolded in the pages of the New York Times last week, with Stephen Sondheim playing the part of the crotchety old ghost and Suzan-Lori Parks, who (along with Diedre Murray) wrote the book for American Repertory Theater’s dramatically reworked revival of George Gershwin’s “Porgy and Bess” (which begins previews August 17), as the award-winning black author overhauling a controversial yet well-loved part of the American musical canon. Going in, I hoped that “Chasing Heaven” would be a fun, thought-provoking warm-up to the A.R.T. production, shedding some light on what’s at stake in such a risky facelift of an indelible work.

There are germs of a few good ideas in playwright-director Leah Maddrie’s script, including a feeble lampooning of the political correctness in some black intellectual circles, a throwaway joke about Gershwin (Gerwitz complains of being often confused with that other, more famous composer descended from hardscrabble Jewish immigrants), and an almost-funny reenactment of Gerwitz’s TV biography.

However, the bulk of the play consists of Morton and Gerwitz yelling at each other about things like Authenticity and History and the Role of the Artist, to the tune of tinny piano music. His basic assertion is that, whatever its flaws, “Chasing Hebben” was from a specific place in time, and messing with it is a refutation of that history and authorial intent. She argues that he’s a Jewish white guy, with no right to any representation of the black experience in the South in the first place, so his deeply offensive product can only be improved.

These are worthy subjects of discussion that have plagued “Porgy and Bess” for most of its existence. But the treatment of those issues is infuriatingly simplistic, and it’s difficult to care when Morton and Gerwitz are so whiny and unlikable. There’s a tiny, brief amount of fun in matching the characters to their real-life historical counterparts: there’s Gershwin; there’s Alice Walker; you might spot Zora Neale Hurston skulking around. But this diversion ends shortly after one finishes reading the program. None of these characters, however lovingly researched, move the work along, nor do they get to sing any great stuff.