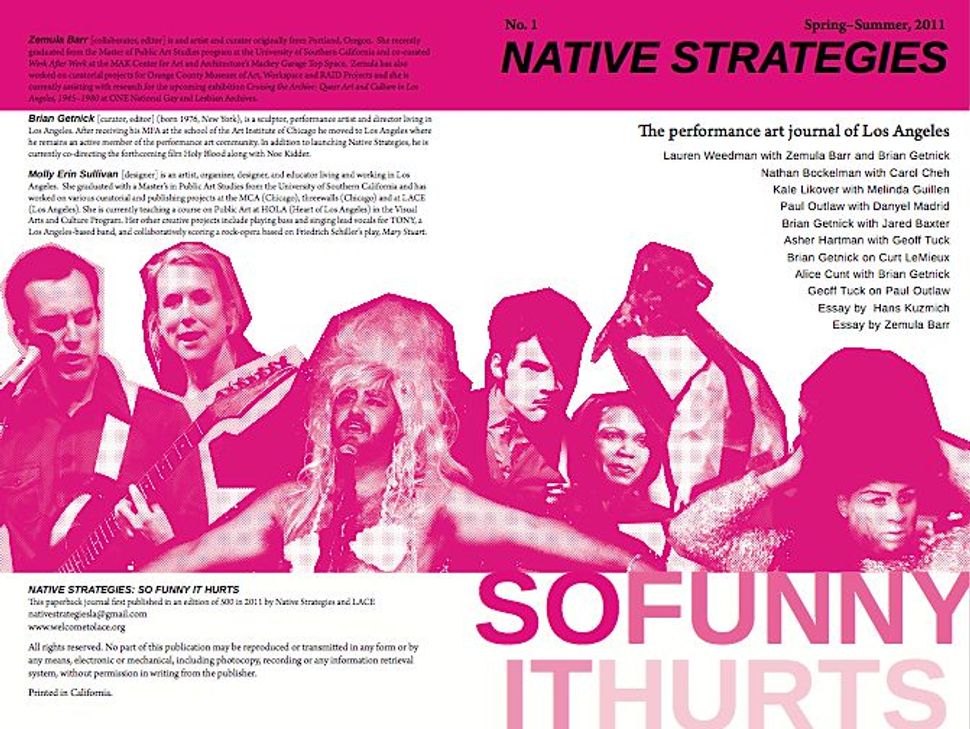 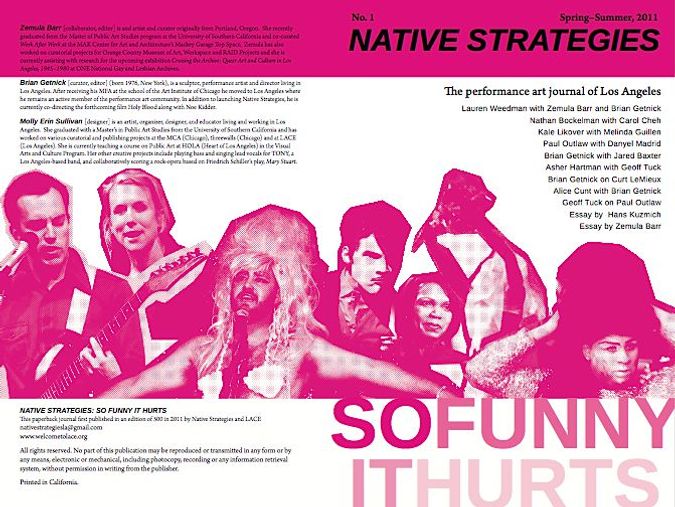 Now this decidedly avant-garde world is about to pried open. On August 11 Native Strategies was launched, a new publication wholly devoted to investigating this expanding genre in Los Angeles. Behind the journal is Jewish artist and emerging curator Brian Getnick.

“The magazine’s mantra is hyper inclusiveness,” explained Getnick. “So I wanted to include a wide variety of perspectives, especially ones from outside the academic community.”

Indeed, performance artists in LA are as diverse as the venues they perform in. Head to the galleries clustered around Chinatown and it is not uncommon to watch a noise band decked out in hotdogs, or observe an obese man wearing nothing but sneakers and a crown on his head.

Even major institutions regularly invite performance artists to create events. Last year, the Museum of Contemporary Art hosted a series of space-specific experiences on the museum’s premises. Likewise, once a month beside the rooftop pool of the trendy Standard Hotel, a rotating cast of performance artists shock, confront and entertain the glitterati. For his part, Getnick made a name for himself crafting garish costumes and then performing in them during dance parties and at nightclubs.

“What makes LA unique is that the traditional lines between genres are blurred,” Getnick said. “Actors, musicians, producers, dancers and artists cross-pollinate ideas and it gets termed performance art.”

While Getnick’s Native Strategies will be the only LA-based performance art magazine currently in print, it is not the only one to have ever existed. Between 1978 and 1997, High Performance, a quarterly, also examined performance art in LA, though it later broadened its editorial vision to include other mediums.

Though the magazines may have changed, many of the politics involved remain the same. Artists and critics still debate what constitutes a performance and whether or not a performance should be documented for posterity. Moreover, they argue over what differentiates performance art from traditional theater or a concert.

Getnick says he hopes Native Strategies will address those issues and more.

“LA’s performance art scene is gaining notoriety,” he said. “My hope is that Native Strategies will help the scene grow by acting as a critical sounding board and as an instigator for future performances.”