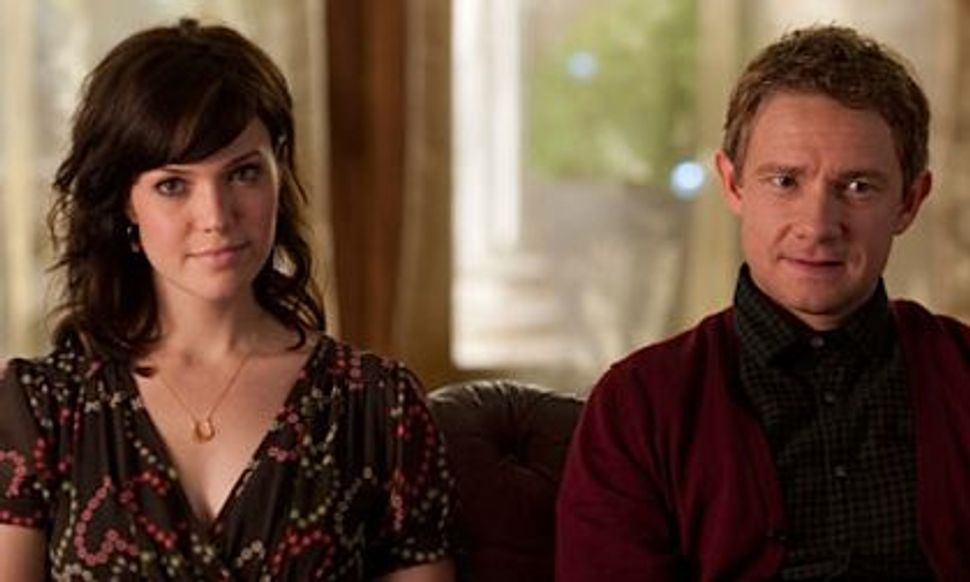 “Swinging With the Finkels,” a 2010 British comedy, opens August 26 in South Florida and Palm Springs. My guess is that the distributors had visions of West Palm Beach and Del Ray clubhouses emptying as busloads of Jewish senior citizens rushed to see the film.

After all, outside of the local playground, how often do we see a landsman swing?

But first, three words of advice: Not. So. Fast.

American Ellie (Mandy Moore) and Alvin (Martin Freeman) met at a British University. They’ve been married long enough that the spark is gone, something that bothers Ellie more than her spouse.

“We used to be all over each other,” she points out.

They turn for advice to married friends, Peter (Jonathan Silverman) and Janet (Melissa George), who, as it happens, are having ignition problems of their own. “Sometimes he finds me unattractive,” Janet says, two breast pumps dangling from the mother lodes.

The Finkels fail in their initial attempt to ignite their marriage — she with skimpy nightwear, he in a fireman’s outfit. Ellie’s Plan B is to follow suggestions she receives from a gaggle of women at the beauty salon: gratify yourself. In one of the film’s few humorous moments, an older woman sitting in the next chair overhears the conversation and volunteers:

The only other bright moment comes from another senior, the always-dependable Jerry Stiller; he plays Ellie’s grandfather visiting from the States. Unfortunately, he walks in as she is using a large cucumber to fulfill the salon advice, prompting Stiller to opine:

“I’ll never be able to look at a salad again.”

There are no characters, just caricatures. Ellie is a designer about to have her first show. Alvin doesn’t even feign interest, prompting me to wonder why there were ever sparks in the first place. She could do so much better.

Except when it comes to picking film projects. Singer-turned-cutie-pie-actress Moore has been in one disaster after another: “Licensed to Wed,” “Because I Said So” and “Love Wedding Marriage,” among many, many others. She’s photogenic and a competent enough actress who ought to hold out for better scripts — or go back to singing.

“Swinging With the Finkels” is like a sitcom, but in a school yard way. The jokes, such as they are, are the kind grade school boys snicker at. It’s not a film for the folks at Kings Point. Beyond the film’s quality (or lack thereof) it soon becomes clear that the Finkels are Jewish in name only. To give the family a Jewish name was hardly a marketing ploy, since it is a British film first released in the U.K. But it certainly seems that way in the U.S.

In any event, it appears that Alistair Foot and Anthony Marriott were right. They’re the playwrights who wrote, “No Sex Please, We’re British.” Sex comedies and Brits? They don’t mix.

Watch the trailer for ‘Swinging With the Finkels’: