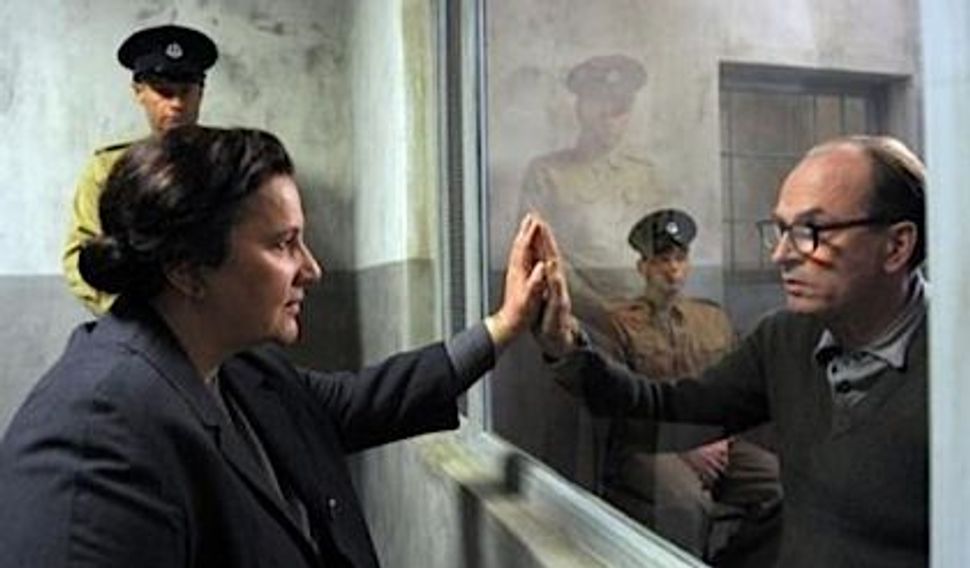 However, before being captured and brought to judgment, Eichmann spent a decade hiding out in Buenos Aires with his family, working a series of odd jobs under the name Ricardo Klement. In a turn of rather puzzling behavior for a fugitive trying to keep a low profile, he sat down for a series of taped interviews with Dutch journalist and Nazi sympathizer Willem Sassen.

Those conversations are the organizing force behind “Eichmann’s End” an occasionally frantic, somewhat disorganized, yet ultimately engaging hodgepodge of dramatic reenactment (some historically verified and some conjectural), present-day interviews, and a smattering of historical footage. The content of the film, originally produced for German television, proves better than its packaging: At first glance, “Eichmann’s End” appears to be not much more polished or considered than the average History Channel special.

But there’s a whole lot to like about it. The performances are top notch, particularly Herbert Knaup’s portrayal of Eichmann, an ultimately sad yet horrifying figure with a weak man’s delusions of grandeur. A self-described “cautious bureaucrat,” Eichmann wants the world to know he matters, and as a result makes damning assertions in the Sassen interviews that ultimately seal his demise at the hands of the Israeli prosecution. “I could cheapen everything by saying that I deeply regret, that I’m very sorry, that I play-act after a fashion, that Saul turned into Paul. No! I tell you quite honestly, if we had taken the 10.3 million Jews which we now know we had, and killed 10.3 million, I would have been satisfied,” he boasts. Knaup’s work in these scenes is fearless in its patheticness; it calls to mind a homely, awkward little boy jumping up and down, screaming for attention. I don’t think Ulrich Tukur, who plays Sessan, had to work very hard to muster his reactions of pitying disgust.

Aside from the interviews, which are chilling enough on their own, the story of Eichmann’s eventual capture, involving Lothar Hermann, a blinded Holocaust survivor hell-bent on revenge and the true-life romance between his daughter, Sylvia, and Eichmann’s son (called Nick in the film, but really named Klaus), is so rich it’s a wonder that there haven’t been several big-budget movies on the subject. Here, the TV roots of “Eichmann’s End” show a bit more prominently. The scenes in which Hermann helps skeptical Israeli Mossad agents track down Eichmann made the whole case feel as consequential as anything on a CBS Monday night lineup; the doe-eyed exchanges between Nick/Klaus and Sylvia wander deliberately into Lifetime movie territory. Such treatment lends a lightness to this chapter of the Eichmann story that will be welcomed by some viewers and thoroughly irritate (possibly offend) others. I didn’t mind it so much.

Watch the trailer for ‘Eichmann’s End’: