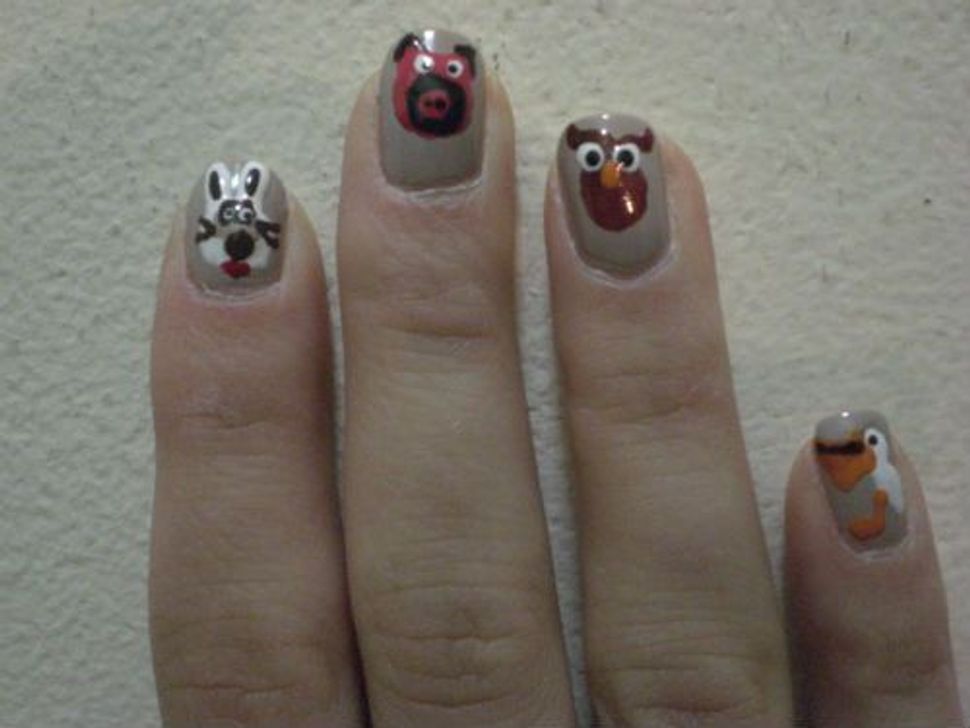 Now, a Westchester County, N,Y., rabbi is adding her own gloss on the notion of Jewish glamor.

Rabbi Yael Buechler has an unusual hobby: She paints her nails to correspond with a Torah portion, midrash, holiday or “lifecycle event,” according to her website, midrashmanicures.com.

For Passover, Buechler depicted the 10 plagues in miniature; for her own ordination, she spelled out “Yesh Li Rav Yael” [“I have a Rav (Rabbi), Yael”], a pun on the Hebrew phrase for “I have plenty” from her senior sermon on Parshat Toledot. For Parashat Re’eh — the Torah portion that includes a list of “clean” and “unclean” animals — Buechler illustrated her digits with a menagerie of legal and illegal beasts.

Buechler, a 25-year-old recent graduate of the Jewish Theological Seminary, “began doing her own weekly manicures back in 1996, and since then she has designed manicures anywhere from intricate scenes of Noah’s Ark, to The Ten Plagues for Passover, to famous biblical phrases,” her website states. “Her manicures have been discussed by celebrities including Jon Stewart and Barry Manilow.”

When not self-administering righteous manicures, Buechler serves as the middle school coordinator of student life at the Solomon Schechter School of Westchester, according to her website.

To ensure that Torah-manicure addicts have a forum to share their Judaic onychologic canvases, Buechler “is currently developing a platform for users to be able to upload their very own MidrashManicures,” her site proclaims.