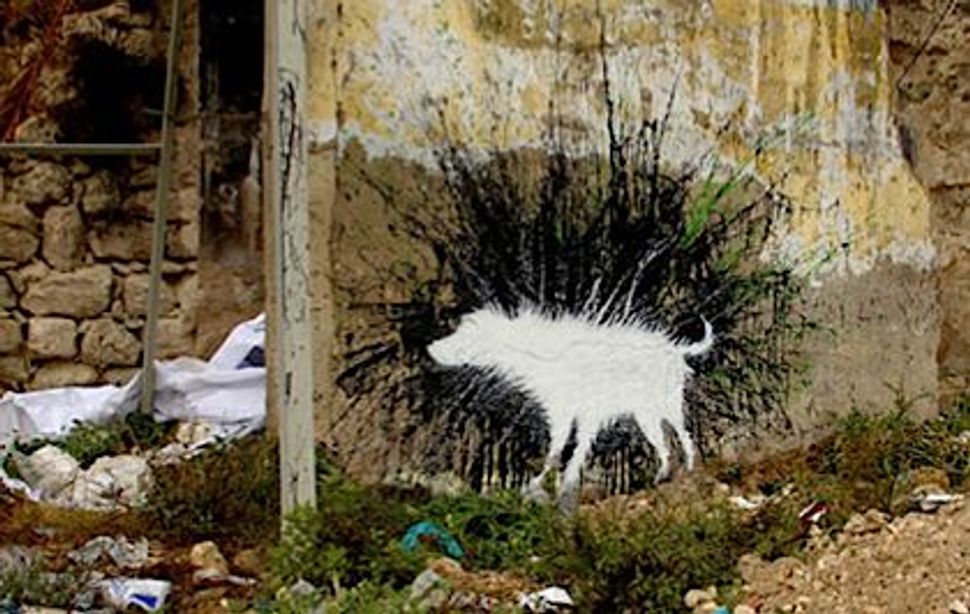 You know those images the street artist known as Banksy painted on walls in the West Bank in 2007, and displayed in his recent film “Exit Through the Gift Shop”? Well, they’re not there anymore. Instead, they are on display at an art gallery in the Hamptons, and on sale for very high prices.

The owner of the Keszler Gallery, Stephan Keszler, claimed that he bought the artworks from Palestinian entrepreneurs who removed them — huge chunks of wall and all — from the Bethlehem structures on which they were painted. Keszler reportedly said this was all done legally, and that the excevators paid the owners of the structures Banksy had decorated. They had then planned to sell the art on eBay, but got cold feet when they realized how difficult it would be to move such massive pieces of concrete over international borders.

Keszler teamed up with Bankrobber Gallery in London to find the pieces (by then dumped in an abandoned lot), pay for them, and arrange for them to be trucked into Israel, shipped to England (where they were cleaned up by an art restorer), and then transported to New York.

The elusive Banksy’s representative, Pest Control, said that the Keszler Gallery show was not sanctioned, and that the artworks have not been authenticated by either Banksy or anyone who officially represents him. “We did warn Mr. Keszler of the consequences of selling expensive artworks without authentication but he didn’t seem to care. It’s like selling a car without the pink slip,” Pest Control told Gawker.

Hearing about this, I couldn’t help but think about Banksy’s film commentary on the absurdities that have accompanied the crossover of street art into the over-hyped and over-priced world of contemporary art collecting. It’s not hard to imagine that these pieces of street art would have been infinitely more valuable had they remained on the wall of a butcher shop and on the side of a bus shelter, where they were in the first place.