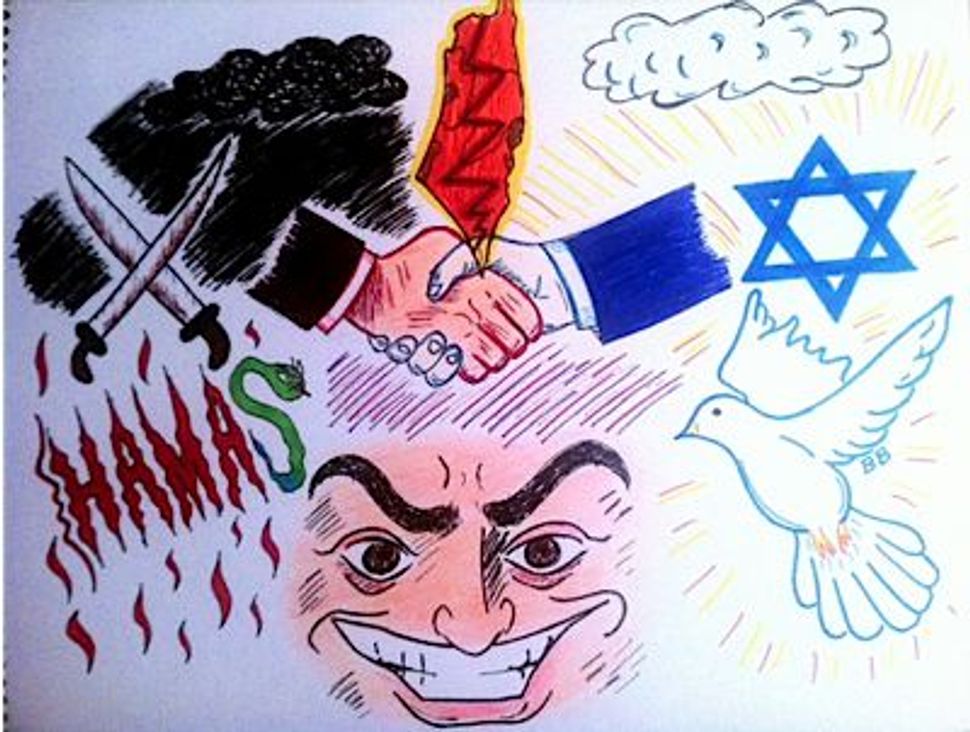 ?Piece no 1? by Bill Bassman

According to its publicity materials, “Response Art: An Experiment in Politics, Power, and Pop-Culture,” the exhibit currently running at the Dershowitz Center for Pro-Israel Art, deep in Brooklyn’s South Slope neighborhood, promises to show what happens when artists and intellectuals “struggle together towards a new understanding of Israel and the Middle East — aided by the vision of artists inspired by the tremendous burst of cultural creativity unleashed during the ‘Arab Spring’ and ‘Israeli Summer.’” 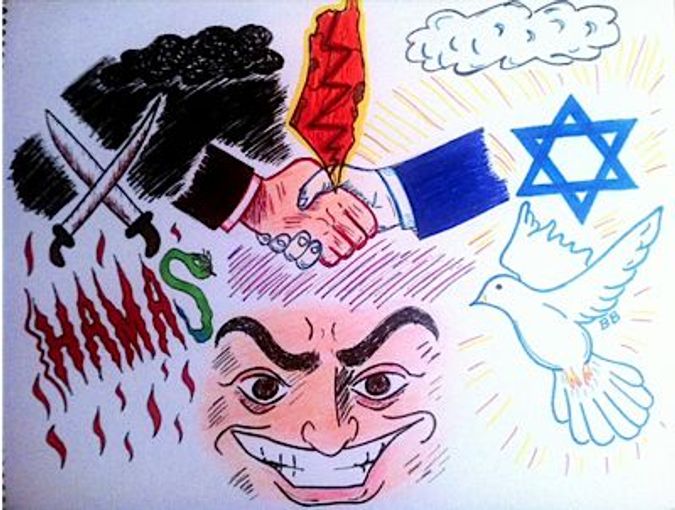 ?Piece no 1? by Bill Bassman

Over the past few months, the artists involved attended a series of lectures and panel discussions exploring the current situation in Israel. They were then asked to “transform the themes, arguments, and emotions they observed into art.” The work on exhibit now is the result of this process — their “response,” as it were.

One can imagine something great and necessary coming out of this: a challenging mix of competing ideas, Jews and Palestinians coming together at last to engage frankly and honestly, at least through art, in the hard conversations that are required if either side is going to survive. But that assumption would be naïve.

Artists 4 Israel, the group that, along with Birthright Israel, sponsored “Response Art,” isn’t interested in art, per se. Or, maybe, it would be more accurate to say that it sees art as a vehicle for its true goals. As the letter from Daniel Seaman, the Israeli Ministry of Public Diplomacy and Diaspora Affairs Deputy Director General, that was proudly printed in the opening night program puts it, “‘Artists 4 Israel’ is one of the more — if not the most — creative, innovative and effective Israel advocacy projects today… [Artists 4 Israel] is changing perceptions of how Public Relations can be conducted.”

And so, looking more closely at the contents of the panels the artists attended, one discovers that the topics ranged from “The Palestinian Right to Israel,” which claimed to “systematically and methodically [expose] the myths and lies about the Arab right to the land of Israel,” to “Making a Case for Israel,” which promised to teach “how to respond to difficult questions, such as ‘Israel is an Apartheid state’ or ‘Israel commits war crimes.’ [sic]”

All of which explains why the artists involved in “Response Art” have been culled not from the wide range of world-class Jewish and Arab artists working in the world today, but from the much smaller number of artists willing to unequivocally, and without question, support the Israeli state in all it does. The work on display varies from inept to incompetent to, at its best, bludgeoning and didactic.

Art can do many things. It can provoke thought. It can present complex emotions, or complicate the viewer’s emotions. It can change your understanding of how the world looks, feels, sounds, even tastes. It can disrupt your sense of reality, lead you into a new state of being, radicalize you, comfort you, disturb you, alter you forever.

“Response Art” does none of these things. Instead, it peddles crudely drawn, and crudely thought through talking points (for absurdly high prices — upwards of $10,000, the cost of a good Jasper Johns). It pleads for you listen to the most reductively sentimental chambers of your heart, those that chant “next year in Jerusalem,” regardless of what the rest of your being might know about the real situation in Jerusalem, this year.