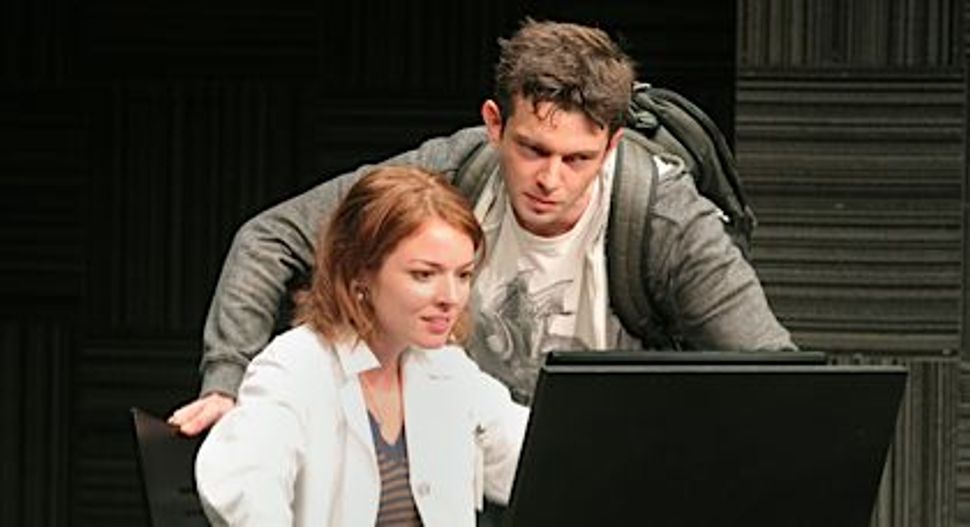 There’s a moment late in Itamar Moses’ new play “Completeness,” running until September 25 at Playwrights Horizons, when the shifting scenery stops shifting. Lights blink. Eventually two of the actors appear, talking about how since their characters don’t reappear they have come out to keep the audience engaged.

Now, you don’t have to be an experienced theatergoer to know that this whole sequence is probably scripted (it is). The interruptions and digressions feel artful. But this doesn’t take away from the brilliance of the conceit, which acknowledges the artificiality of theater while also embracing it. Commenting on technology while keeping the human interest high is what “Completeness” does throughout.

It’s the story of Elliott (Karl Miller), a brilliant graduate student in computer programming, who picks up Molly (Aubrey Dollar), a student in molecular biology, by offering to write her an algorithm. The setting may be graduate laboratories, but the subject is relationships. Elliott stops during his first intimate encounter with Molly to say:

I don’t know. I just love this moment when you’re suddenly allowed to start… touching someone? Like, you’ve wanted to, but of course you can’t just walk up to someone and touch them, but then, suddenly, you’ve passed through the membrane, and you can. Like. I’d been thinking about touching you? More or less since the first time I saw you?

Anyone who’s ever been in a relationship will recognize the power in the observation. And there’s a poetry in the uncertainness of the dialogue, too, that speaks to a 21st-century heart.

At first it seems as though the play will follow a conventional boy-meets girl-story line, but it doesn’t. Nor is it about the other encounters they have. Elliott tries to write an algorithm for Molly and her experiments with mice that solves the travelling salesman problem — trying to find the shortest route between a group of cities, visiting each one once. It is not unlike the possibilities of the human heart. How do you know if this or that partner is the right one? The play presents different “iterations” of Elliot and Molly’s searches for fulfillment. It’s not so much that plots tie themselves up neatly as the characters find a way through what seem like nearly random happenings.

Moses’ dialogue is both slangy and sophisticated. Like Tom Stoppard, to whom Moses has been compared since the former wrote the introduction to Moses’ “Bach at Leipzig” in 2005, Moses teaches you a lot about the subjects dear to his characters’ hearts. But when Elliott and Molly explain their complex work to one another they’re not merely showing off — and so the audience can take it in on all levels.

As the somehow damaged Molly, Dollar both ingratiates and infuriates. You can see why Miller’s smart, steady but evasive Elliott would fall hard for her. Brian Avers is a chameleon as both Molly’s professor-lover and fellow graduate student. Meredith Forlenza has less to do as Elliott’s soon-to-be-dumped (and rather difficult) girlfriend and eager undergrad. Director Pam McKinnon keeps the pace high and the mood buoyant.

In “Completeness,” Relationships are dissected and parsed, but escape definition. Technology doesn’t really help. What remains is choice. And that choice, being an act of faith, is particularly human.