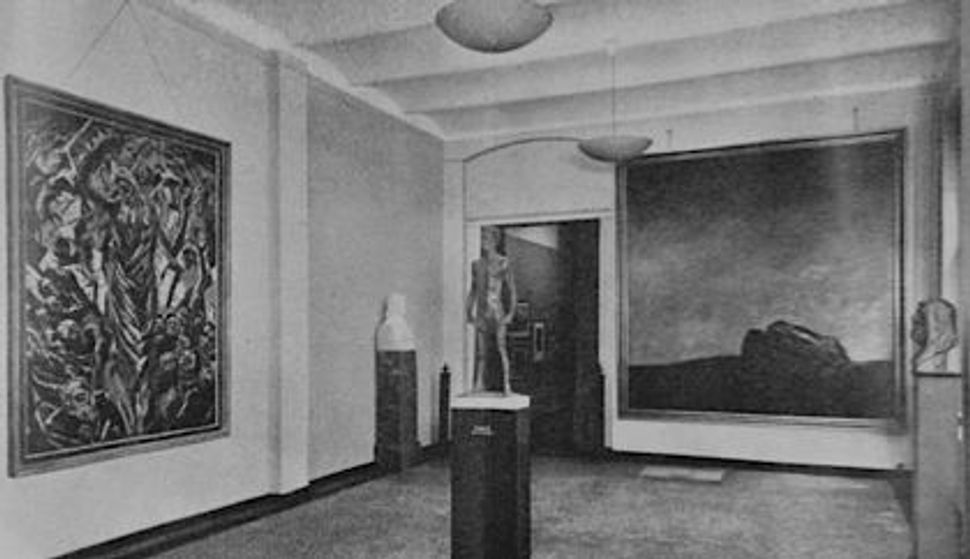 The entrance to the first Berlin Jewish Museum. Image courtesy of Centrum Judaicum.

As valuable as art can be, Karl Schwarz knew that life is much more precious. That is why he fled with his family to Tel Aviv from Berlin only months after opening the first Jewish museum in that city in January, 1933. Now, almost 80 years later, a portion of the art that Schwarz collected has been painstakingly reassembled and put on display on the same spot where his museum once stood.

The search for the art, looted and stashed away by the Nazis, has preoccupied Hermann Simon, director of the Centrum Judaicum (which stands where the museum once did, next to the New Synagogue on Oranienburgerstrasse) and his deputy, Chana Schuetz, for the past 30 years. Not all the components of the original collection, which included works by Max Liebermann, Marc Chagall, Lesser Ury, Moritz Oppenheim and Leonid Pasternak, have been located. The majority of those that have been recovered are on loan to the Centrum Judaicum for the show, which is titled “In Search of a Lost Collection.”

Although its director had escaped from Germany, the museum stayed open until Kristallnacht, in November 1938, when it was seized and sealed by the Nazis. In the years between Schulz’s departure and the museum’s closure it served as a refuge for Jewish artists who remained in the city.

After the war, more than 280 stolen paintings were discovered in a West Berlin vault, and made their way to art institutions like The Israel Museum in Jerusalem and the Skirball Center in Los Angeles. Others ended up in private hands in Poland, Israel and the U.S. Two were even found hanging in a retirement home in England.

One painting by Max Liebermann that was in The Israel Museum’s collection was found to have only been on loan to the museum in Berlin by the artist’s wife. After the show at the Centrum Judaicum is over, it will be restored to Liebermann’s family.

The largest-format works known to have been in the original collection have not yet turned up. Simon and Schuetz are hopeful that they will eventually be found, along with the silver Judaica and North African antiquities that were once among the holdings of the museum. “I don’t think these things have gone forever. They are somewhere, and we will find them,” Simon told Bloomberg News.

The reunited works of art will not be able to remain together; they will be returned to the museums and collections that have been their post-war homes by early 2011. “In Search of a Lost Collection” is showing at the Centrum Judaicum in Berlin until December 30.