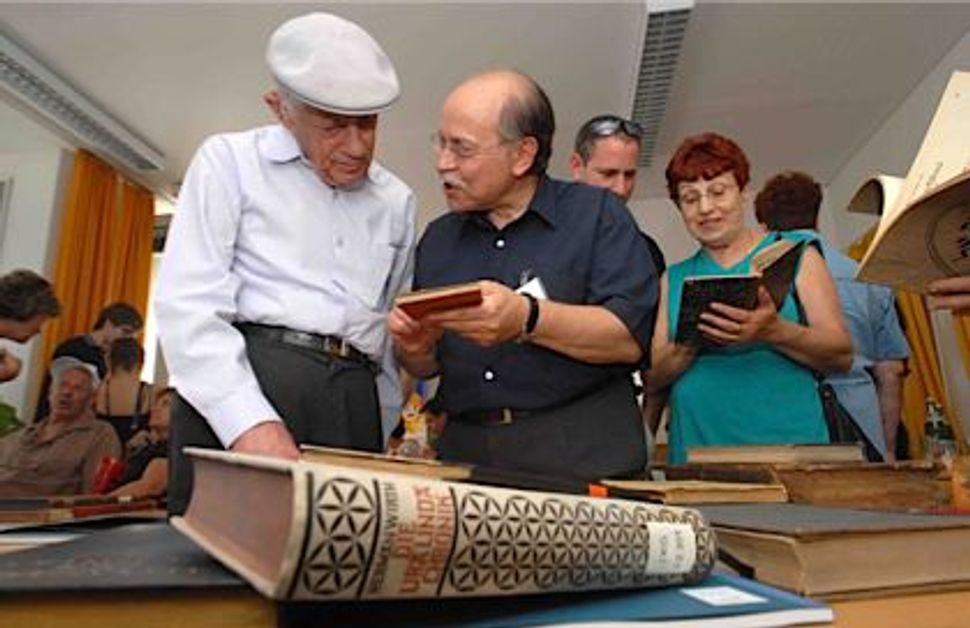 Before and during World War II, between 30,000 and 40,000 Jewish books ended up in the hands of Julius Streicher, the infamous Nazi and editor of the anti-Semitic propaganda newspaper Der Sturmer. Today, German-Jewish community leader and former journalist Leibl Rosenberg is working to return 10,000 of them to their rightful owners.

The task is far from easy, given that few, if any, of the people from whom these books were stolen are still alive. To make matters even more difficult, only one-third of the books have stamps, signatures, ex-libris plates or bookmarks to indicate to whom they belonged.

But that has not deterred Rosenberg, who turned himself into a librarian, a Jewish and German historian, and a genealogist to catalog the collection and track down descendants and heirs of the books’ owners. He’s been at the task since 1997, and so far he has successfully restored 200 of the 10,000 books. “I don’t think we will even return more than 500,” he admits.

Instead of deterring Rosenberg, this realistic assessment has encouraged him to do what he can to honor the memory of the books’ owners by documenting and preserving the collection. The animated, yarmulke-wearing 63-year-old considers it a holy undertaking.

The Sammlung Israelitische Kultusgemeinde Nürnberg (Collection of the Jewish Community of Nuremberg) is housed at the Nuremberg Municipal Library, where it has been stored since the end of World War II. Streicher’s vast Jewish book collection, along with other looted and confiscated Jewish books, was taken to collection points in the American Zone and sent to libraries at The Hebrew University, Yeshiva University, the Jewish Theological Seminary and similar institutions. According to Rosenberg, the American military government offered to return recovered books to the 38 survivors from Nuremberg’s 10,000-strong pre-Holocaust community, but they, with more pressing concerns at the time, turned them down.

Consequently, the books ended up in storage rooms or mixed in among the stacks of the city’s municipal library. It was at the urging of Arno Hamburger, a Nuremberg survivor and influential local politician, that Rosenberg went to check out the Jewish books, which had been ignored for decades.

“The first book I picked up from the heap on the floor was a Nuremberg siddur, inside of which a woman name Berthe had inscribed her name and her parents’ yahrzeits,” Rosenberg recalled. “I reflexively kissed it. The library guy who was with me looked at me funny.”

From that moment on, Rosenberg committed himself to the Sammlung IKG. Although the books are housed at the library, they are the legal property of Nuremberg’s 2000-member Jewish community. The City of Nuremberg funds his salary, as well as the book restoration, administration and outreach costs. No processing fee is charged to families seeking restitution of their property.

In the past 14 years, Rosenberg has located every single IKG book in the library. “We don’t know how each of them got here, and we’ll never know,” he said. He has been able to document that 3,600 of the books have provenance signs (including 2,154 names), that they come from 444 places in 26 countries (“from Albania to the U.S.”) and that they are written in 20 different languages. The books run the gamut from biblical and rabbinic literature to liturgical works to secular subjects to school texts and children’s books.

Rosenberg’s work of digitally scanning provenance signs and creating a database of the books has been akin to detective work. He has gleaned “traces and fragments” of people’s lives. “It’s like a broken mirror, with only bits and pieces that can be seen,” he reflected.

He has publicized the Sammlung IKG list through the project’s website, Jewish organizations and social media, and he is waiting for survivors’ families to contact him. Once a family is in touch with him, he confirms that they are indeed related to the book’s original owner, and he requires them to sign a legal contract. “We don’t want more stealing,” he emphasized.

Rosenberg, who was born to Polish survivor parents in a Bavarian displaced persons camp and has lived in Germany his entire life, except for a year of study in Israel, has not recovered any books belonging to his own ancestors. He was, however, able to make one personal connection to the collection. Through some research he determined that a school book published in 1910 and inscribed in a child’s handwriting with the name “Else Wechsler, Munich” once belonged to the girl who would grow up to become Rosenberg’s own Hebrew school teacher after the war. That book is one of the 200 that have been claimed. It is now in the hands of Wechsler’s grateful daughter in Toronto.