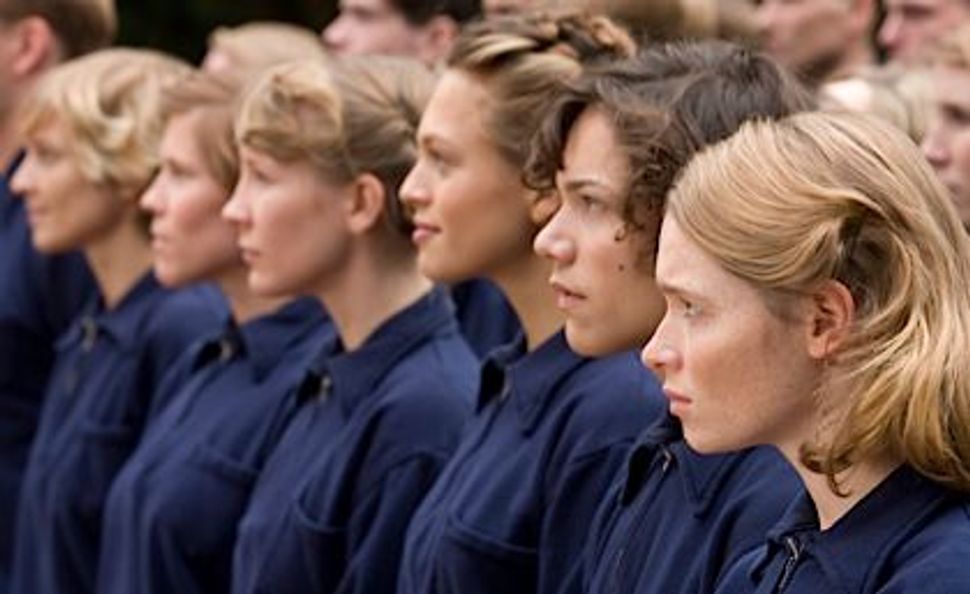 As told in the German feature film “Berlin 36,” opening in New York September 16 and Los Angeles September 23, Gretel Bergmann, Germany’s greatest female high jumper at the time of the 1936 Berlin Olympics, was very much “out” as a Jew, and she suffered the consequences. But a competitor, Marie Ketteler, who figured prominently in the story, was in the closet sexually.

There are immediate hints in the movie that there’s something amiss about this 17-year-old, who is flat chested and affirms to her doctor that she’s not yet had a period. Eventually, it becomes clear that she is really a he. A 2009 article in Der Spiegel indicated that Ketteler was actually Dora Ratjens, whose gender was misidentified upon birth because of ambiguous genitalia, and who was brought up as a girl.

The article disputes the movie’s assertion that the Nazis knew Marie/Dora was a male when they recruited him to replace Bergmann on their Olympic team. What is important, however, is that they were conspiring to blunt the American threat to boycott the Berlin Olympics if Jews were not allowed to compete, even as they prevented a superior Jewish athlete from undermining their racial ideology by defeating “Aryans.”

In 1934, Bergmann had moved to England where she won a women’s high-jumping championship. Yet she returned to Germany, setting the Nazi scheme in motion for her to train with, but be disqualified from, their team.

In September 1938, a few days after winning a women’s high jump competition in Austria, Ratjens was arrested on a German train for being a transvestite. According to Der Spiegel, an examining police doctor pronounced him a man, but also noted the following: “A thick band of scar tissue running backwards from the underside of the penis in a relatively broad line. It is therefore questionable whether this band of scar tissue would allow him to engage in sexual intercourse in a normal manner.” The article continues: “This anatomical anomaly probably explains the confusion about Ratjen’s gender at birth.”

Thereafter, Ratjen lived his life as a man, but probably a very lonely one. In the closing credits of the film he is said to have died, “in total reclusion,” in Germany in 2008.

By contrast, Gretel Bergmann, now known as Margaret, immigrated to the United States in 1937; her family fled to England that year and came to the United States a few years later. Gretel/Margaret married Bruno Lambert, her fiance and fellow exiled German athlete, who became a physician in the U.S. Margaret won American championships in the high jump and shot put in 1937 and ’38.

The Lamberts have been married for 73 years, living in the New York City borough of Queens. They have two sons and two grandchildren.

In a phone conversation with the Forward, the former champion, now 97, indicated that the film had taken some liberties in dramatizing her story. For example, she didn’t know that Dora was a man until learning about it from an article she read decades later. Moreover, she does not recall being shunned by all the German athletes (other than Dora), nor does she know if Dora intentionally under-performed at the Olympics.

But she has no problem with the film’s dramatization, and was delighted to meet the director, Kaspar Heidelbach, and others in the production, including actress Karoline Herfurth, who trained for three months in the high jump to play Bergmann credibly and without a stunt double. She hosted them in her New York home with what Heidelbach characterized as a “typical Swabian meal — veal goulash, spaetzle and cucumber salad.”

Watch the trailer for ‘Berlin 36’: