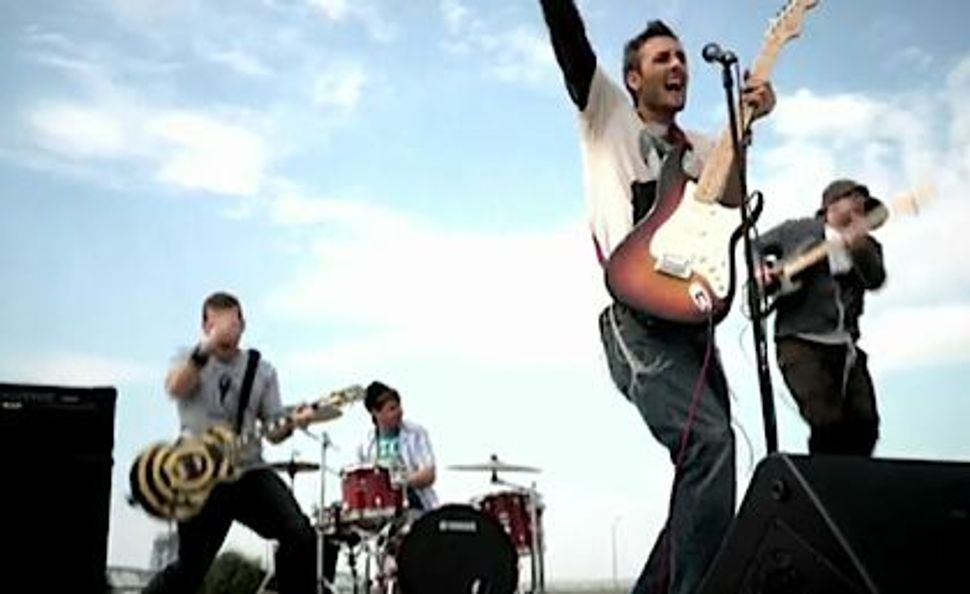 Shortly after The Groggers’ frontman L.E. Staiman got back from studying in yeshiva in Israel, he began recording punk songs with quirky Jewish-themed concepts. The demos got positive feedback from friends, but he was told that there was no demographic that would “get” his songs.

Then he wrote “Get,” an anti-love song about how a husband in a failing marriage needs to give his wife a get (bill of divorce). The song featured a hooky chorus: “You gotta get, get, get, get, give her a get… ’cause she don’t love you no mo’.” A quickly produced, low-budget music video for the song, directed by a film school student and featuring a pick-up band of musician friends, went viral when it was released in early 2010.

Agunah activists quickly adopted “Get” as an anthem and the response convinced Staiman to create The Groggers, a Modern Orthodox pop-punk quartet. The current incarnation of the band features Staiman on guitars and vocals, together with guitarist Ari Friedman, bassist C.J. Glass, and a drummer who prefers to remain anonymous due to the controversial nature of the material.

A few months after “Get,” the band released a follow-up video, “Eishes Chayil,” which featured a cameo appearance by Jewish singer and guitarist Rav Shmuel, followed by another single called “Upper West Side Story.” All of these tracks are included on The Groggers’ debut album, “There’s No ‘I’ In Cherem,” which was released last month.

“There’s No ‘I’ In Cherem” represents a good-natured yet sarcastic take on contemporary Judaism from the perspective of a young Modern Orthodox musician. Much of the material on the album will only be fully understood by insiders, and some of it will make certain folks angry. But then, what kind of punk band never offends? As their name indicates, The Groggers are here to make some noise.

In a recent phone interview, I asked Staiman about his concept for The Groggers. “We’re going to make jokes from the inside, as opposed to outside,” he told me. “There’s so much in Judaism to poke fun at.”

Offbeat characters with humorous personal issues populate The Groggers’ songs. From a guy who got dumped by his girlfriend so that she can date a Maccabeat, to a frustrated Queens single who wants to move to the Upper West Side, Staiman’s quirky subjects illustrate the ridiculous aspects of modern religious life.

Each song also presents a snarky perspective or a situation with a twist. “Malka Jihad” is a love song in which a Modern Othodox man sings to his parents about his anti-Zionist Hasidic flame. “Oh, oh Malka Jihad / She talks like Islam / But she looks like Chabad…. And I know that one day she’ll make a great mom / And you’ll all see that she’s the bomb.”

I imagine many Lubavitchers will not be pleased with their community’s portrayal on “Farbrengiton,” which takes on the permissive drinking culture of Chabad: “Get drunk for dinner / And farbreng all night / Break out the bottles / ’Cause it’s the Rebbe’s yarzheit.”

In “One Last Shatnez,” Staiman sings about the challenge of observing the biblical prohibition against wearing clothing made of both wool and linen, as though that’s the only commandment he still finds demanding.

“Upper West Side Story” is a dream about living in the utopia of Modern Orthodox singledom: “I wanna move to the Upper West Side / And find a pretty girl and never make her my bride / So what, the rent is high… I wanna move to the Upper West Side / Every morning walk of shame / ’cause I had to spend the night.” And “Friday Night Lights” humorously tweaks the idea of Friday night being “mitzvah night,” in what I’m pretty sure is the first time the mitzvah of having sex on Shabbos has been addressed on a frum record.

Finally, the Adam Sandler-esque album closer, “Don’t Play Ball On Shabbos,” that if they do play ball on Shabbos, “Hashem will come down from the mountain and strike you and your whole family down with lightning.”

Listen to ‘Upper West Side Story’:

In our conversation, Staiman explained the album title (which references the motivational adage “There is no I in team” along with the hebrew word for excommunication), saying, “we ought to realize that we’re all in this together.” The lyrics of the title track are more personal than most of the other songs: “You look this way and say that boy is no Jew / But some may say the same about you.”

I asked Staiman about the response to The Groggers, and he told me that he’d received an e-mail that morning telling him that he was “going to hell.” I can’t imagine better feedback for an edgy Modern Orthodox punk band.

Watch the video for ‘Eishes Chayil’: